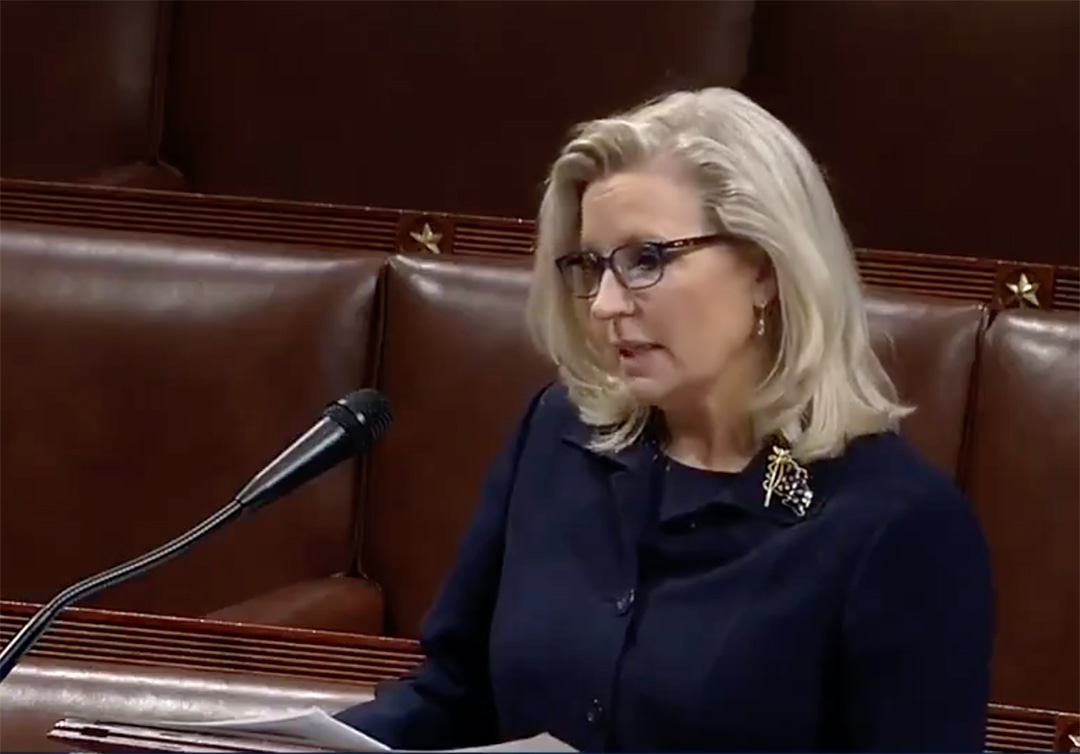 Rep. Liz Cheney gives a speech to the House on May 12, speaking out against the GOP for its overwhelming support for former president Donald Trump. (Screenshot C-Span via Twitter)

SUBLETTE COUNTY—Natalie Strong took a moment outside of the All American Fuel convenience store in Big Piney to think back on Jan. 6, 2021, the day a violent mob stormed the U.S. Capitol.

Strong was a little embarrassed to say it, but she was drawing a blank. The working mother didn’t have much of an opinion about U.S. Rep. Liz Cheney, nor did she have much say about her congresswoman’s role as vice-chair of the congressional committee probing the insurrection that played out 1,700 miles away some 18 months prior.

“I couldn’t even tell you what happened on Jan. 6,” Strong said. “I have so much going on in my life, I really just don’t follow the news. It’s not my thing.”

Strong’s lacking interest in the events of Jan. 6, and the U.S. House committee’s examination of the attack, was widely shared among the 19 Wyoming voters that WyoFile spoke with this week in rural Sublette County — high-desert gas-field country that’s home to small communities like Bondurant, Hoback Ranches, Daniel, Marbleton and Pinedale. The majority of randomly selected interviewees — nearly 80% — have paid no attention to the hearings that some theorize could lead to the criminal prosecution of former President Donald Trump. The handful of residents who had tuned into or read about the committee were skeptical of its motives and legitimacy.

“They had to hire Hollywood,” Valerie Wheeler, a bartender at the Den, said between serving customers at the Daniel Junction restaurant. “I’m serious, I don’t believe a word that comes out of their mouths.”

A dim view of Cheney, a belief that the 2020 election was stolen from Trump and a perception that the insurrection is being overblown to shine Cheney’s star on the national stage were commonplace in Sublette County, where the population has slipped since a natural gas boom in the early 2000s. If such sentiments are as widespread as many observers believe, they jeopardize the electability of Cheney, who sailed to victories in previous House races, but now faces a formidable opponent hand-picked by Trump: Cheyenne attorney Harriet Hageman.

Early polling from Hageman-aligned groups suggests the challenger is well in the lead. But Cheney’s campaign and proponents have bet big on winning hearts and minds through the incumbent’s leadership role in the high-profile select committee hearings and the body’s revelations about the Capitol Building attack. That strategy, however, depends on Wyoming voters paying attention and not having made up their minds.

The approach carries significant political risk. While the second-term congresswoman has occupied the national stage, interviewing witnesses and laying out a case against the popular-in-Wyoming former president, Hageman’s been riding the state’s conventional campaign circuit for months.

“As you will see in great detail in our hearings, president Trump ignored the rulings of our nation’s courts, he ignored his own campaign leadership, his White House staff, many Republican state officials, he ignored the Department of Justice and the Department of Homeland Security,” Cheney said in her opening remarks of the first hearing. “President Trump invested millions of dollars of campaign funds purposely spreading false information, running ads he knew were false and convincing millions of Americans that the election was corrupt and that he was the true president. As you will see, his misinformation campaign provoked the violence on Jan. 6.”

The Jan. 6 committee has held five hearings since with more anticipated in July — reportedly pushed back because of the emergence of new evidence. They’ve captured attention nationally. But not Natalie Strong’s or most of her neighbors’ in Sublette County.

While it’s unclear how many Wyoming residents are watching the Jan. 6 hearings, those who are tuning in aren’t catching it on the Public Broadcasting Service. WyomingPBS has opted to keep its normally scheduled programming, which includes shows like “Curious George” and “Daniel Tiger’s Neighborhood.” Station manager Terry Dugas told the Washington Post his outfit is airing the hearings instead on Create, a digital Wyoming PBS subchannel, because of cursing that sometimes occurs during testimony.

“We have a commitment to the parents in Wyoming to provide a ‘safe harbor’ on our main channel for their children during the day,” Dugas told the Post.

Nevertheless, the Jan. 6 hearings are accessible to anyone with a broadband internet connection: They’re broadcast live over YouTube and elsewhere.

State Sen. Cale Case (R-Lander), who’s been named to Cheney’s leadership team, has tuned into at least parts of the first four hearings, and said he’s talked to a number of Wyoming voters who are “glued” to the hearings.

“It’s a small group of people and maybe an odd group,” Case said.

Case said there are facets of the Wyoming GOP, albeit not its leadership, who are pushing back on Trump’s disproven claims, and the widely held belief, that large-scale, systematic fraud swung the election in favor of Joe Biden.

“I can’t change it,” Case said of Wyoming residents believing Trump’s lie. “I just know that if we let them say it over and over again, it does become true for a lot of people.”

The long-serving lawmaker, who’s been censured by the Fremont County Republican Party for stances that depart from Wyoming Republican Party leadership, said that he’s “proud” of Cheney for combating the misinformation and co-chairing the committee.

“There is right and wrong here,” Case said. “I’m going to see it through to the end. I’m staking my own reputation on it.”

So is Cheney, along with her job.

Former five-term U.S. Sen. and Cody resident Al Simpson, another member of Cheney’s leadership team, said he “doesn’t’ give a damn,” even  if she were polling 80 percentage points behind. The important thing, he said, is that Cheney is in the right.

“This is the worst thing that’s ever happened to America. This destroys democracy,” Simpson said of Trump’s attempts to overturn the election. “At some point in time, her words will go down in the books. At some point in time, [Trump] will be gone, and my Republican colleagues who are for him will be dishonored.”

In the meantime, Simpson isn’t counting Cheney out. There’s still nearly two months to go until the Aug. 16 primary, and until then voters will learn more about Trump’s role inciting the Jan. 6 insurrection. That information  could change the equation for Cheney and her Trump-aligned challenger, he said.

“People in Wyoming are open-minded and closed-mouthed,” Simpson said.

Cheney spokesman Jeremy Adler declined an interview request for this story. So did the Hageman campaign. In an emailed statement, Adler said the committee expects to reveal many more facts that will provide a more complete picture of what happened leading up to Jan. 6 and on the day itself.

Some Wyoming voters and politicos have already written the Jan. 6 committee off.

“There is clearly an agenda, and I say that because they’re not showing both sides,” Lincoln County Republican Party Chairwoman Marti Halverson said. “It’s so choreographed I don’t believe what I’m seeing.”

Halverson, a former state representative, caught up with WyoFile last week  at the Alpine Civic Center during a Donald Trump, Jr. visit to promote Hageman. A couple hundred Star Valley residents showed up on a Wednesday morning to attend, offering hearty applause in response to jabs directed at Cheney.

“Harriet will carry Lincoln County for sure,” Halverson said, “but I’m not going to make any prediction as to by how much, because there are pockets of supporters of Representative Cheney.”

Just north in Teton County, where Cheney owns a home, Republican Party Chairwoman Mary Martin is keeping a neutral stance in the primary battle: Unlike Halverson, she didn’t attend a Trump, Jr. event in Jackson the day prior. Among the Teton County GOP, there are two “very distinct camps,” she said.

“Some have been totally insulted with what she has said about the Republicans in the state of Wyoming,” Martin said, “and others will tell you she’s the bravest person on the planet.”

Teton County conservatives’ reception of the Jan. 6 committee hearings is also evenly split, she said: Some are intently watching, while others think it’s a “big propaganda advertisement” for Cheney’s political campaign.

The dichotomy is tilted more toward skepticism in Sublette County, where nearly 80% of voters cast ballots to reelect Trump-Pence in the 2020 election.

From the parking lot outside the Den at Daniel Junction, Cora rancher Pat Noble took a moment to share his views. Noble isn’t one to watch TV — he finds it too one-sided — but has listened in on the committee hearings when he can over the radio.

“I try to get a well-rounded [presentation] of an issue before I base an opinion,” Noble said, “but it’s kind of hard to find it.”

As for the Jan. 6 events at the Capitol, Noble thought it was a “shame it went that far,” but he believes the insurrectionists’ cause was righteous and that the 2020 election was stolen from Trump. He doesn’t believe, from what he’s heard listening to the committee hearings, that they’re giving the former president a fair shake.

“They’re so head-bent on trying to get Donald Trump pinned on it,” Noble said. “Why are you focusing on that when there’s so many things you can focus on?”

Of the 19 Sublette County residents WyoFile spoke with, only one openly stated that Joe Biden is the rightful president of the United States.

“I’m a professional myself, so I trust the professionals on what they have to say,” Pinedale resident Antolin Barraza said of the election results. “Whether the outcome was what I wanted or not, I’ll leave it up to them.”

Barraza, an engineer, voted for Trump. Like most of his fellow residents who agreed to talk, he was tuned out of the Jan. 6 committee hearings. In fact, he didn’t even know they were happening.

“Almost irresponsibly, sometimes you don’t pay attention to some of these things,” Barraza said. “We’re too busy playing around in the mountains and living the life and enjoying what’s around us. We have that privilege.”