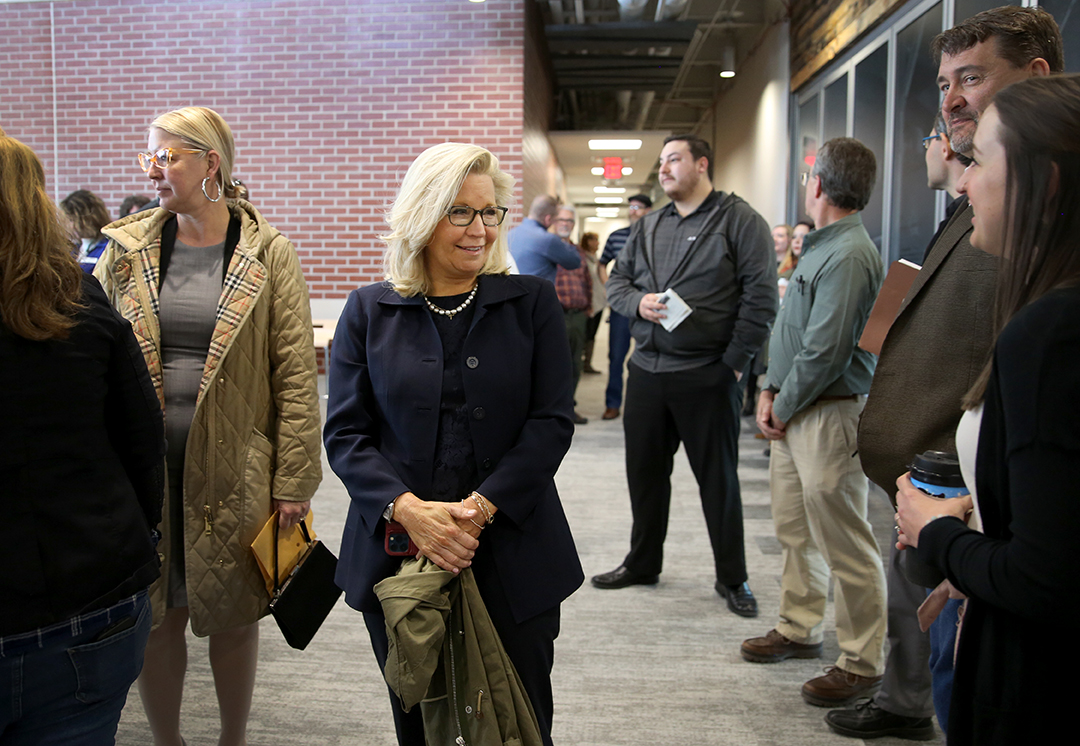 Specific security concerns are being kept close to the vest, but Cheney, Hageman showdown comes with safety worries “like none other” in the history of the state, Wyo PBS station manager says.

Terry Dugas was thinking of the possibility for hostility and even violence when he made the call to exclude the public from Wyoming PBS’ Thursday evening debate featuring the five candidates vying for the state’s lone U.S. House of Representatives seat.

“One of the candidates has seen death threats that I’m aware of, and that’s because they posted it publicly on their Facebook campaign page,” Dugas, the station’s general manager, said. “With the passion running so high among all the supporters of the candidates, we could not risk either the Wyoming PBS staff or the candidates’ safety by opening this up to the public.”

Dugas claimed sole responsibility for the decision to close the doors at Sheridan College, the venue. Candidates engaged in the debate have gone on record saying they prefer the debate stay open, but the decision is final.

“You got what you got, it’s not going to change,” Dugas said. “This particular race is like none other in the recent history of the state, regarding the volatility of the supporters. It was simply a risk I was not willing to take.”

The candidate who posted about the death threat wasn’t the nationally prominent incumbent, U.S. Rep. Liz Cheney (R-Wyoming), but rather state Sen. Anthony Bouchard (R-Cheyenne). He did so in a comment thread on his campaign page, Anthony Bouchard for Congress Against the Swamp, arguing that threats to Cheney were being overblown.

“She pissed off conservatives and conservatives don’t threaten lives,” Bouchard wrote in the June 25 post. “On the other hand, a Leftist from Laramie threatened to storm my house and kill my family…”

Along with Bouchard and Cheney, the debate will feature candidates Harriet Hageman, Denton Knapp and Robyn Belinskey. All are Republicans.

Dugas’ decision to hold a closed-door debate for one of the most-watched congressional races in Wyoming history comes amid a backdrop of reported death threats, lawmakers who say they’re afraid for their lives and vitriol that has pervaded politics in the Equality State. The downward spiral of civility doesn’t serve Wyoming well, argue veteran statesmen like former Gov. Dave Freudenthal.

“I think it’s fairly amazing that a state that hates Washington, D.C. has adopted Washington, D.C.-style politics,” Freudenthal said. “We should have a healthy disregard for the nation’s capital and certainly some of the policies, but now we’ve chosen to mimic their politics, which I think is a step back for Wyoming.”

A Democrat who governed Wyoming from 2003 to 2011, Freudenthal recalled plenty of angry constituents but said he “never felt threatened” during his time in office.

“The media was initially going to be barred,” Blumenshine said. “That was a Sheridan College decision as I understand it, and it was the wrong decision. I’m glad it’s been righted.”

Sheridan College officials were unavailable Wednesday for an interview. But on Tuesday, Dugas spread word that the Sheridan Press was developing a credentialing protocol to admit journalists beyond the panelists.

A liability release sent to prospective attendees includes a provision that organizers aren’t liable for any “bodily injury or death” journalists and family members might sustain.

Journalists in the audience potentially have an opportunity to pose questions to the candidates.

“I hope the press gets the opportunity to come up on stage after the debate and follow up with candidates on anything,” Blumenshine said. “Maybe there won’t be [that chance], but that’s my hope.”

That opportunity for candidates to converse with reporters could introduce more bona fide journalism into the debate. Wyoming PBS gets funding from both the federally funded Corporation for Public Broadcasting and the Wyoming Legislature, which poses a conflict of interest that clouds its relationship with elected officials and government, Dugas said.

“Wyoming PBS considers itself not a news and reporting organization,” Dugas said. “What Wyoming PBS does is public affairs. We don’t have reporters. It’s not our role to speak truth to power.”

Having journalists as panelists does not transform the U.S. House and other Wyoming PBS political debates into true journalism, he said.

“The fact that we invite journalists to participate, I think, is just a reflection of our public affairs,” Dugas said. “We’re not trying to inject journalism into what we do.”

The closed-door debate will not be Wyoming PBS’ new norm, Dugas said. There are five other political debates on the docket for this election season, and all will be open.

“The volatility surrounding this [U.S. House] race is unprecedented,” Dugas said of the Republican primary candidates. “We have no concerns over security for the other five debates.”

Outside of COVID-19 times, neither Dugas nor Blumenshine could recall any past Wyoming PBS-administered political debate being off-limits to the public.

“We have been moderating statewide debates, to my knowledge, really almost since the inception of the station,” Blumenshine said. “I can’t recall any other debates that have been closed to the public, though we certainly have addressed security concerns at debates before.”

Three-time congressional candidate Gary Trauner, a Democrat and repeated statewide debate participant, saw the erosion of decency over the span of his time vying to represent Wyoming in Washington, D.C. Prospective constituents were cordial during his first two campaigns, when he ran against Barbara Cubin and Cynthia Lummis in 2006 and ‘08. But by the time Trauner took on incumbent U.S. Sen. John Barrasso in 2018, it was a “whole different ballgame.”

“For example, I was doing an event in Casper and some guy posted on his Facebook page … a photo of himself on his bed with a bunch of guns and ammo, and talking about me and coming to the event,” Trauner said. “It scared the you-know-what out of me.”

Trauner called law enforcement and his concerns prompted undercover police and even an FBI agent to attend the event, he said.

Wyoming PBS is in a “tough” spot, Trauner said. Still, he doesn’t approve of the network’s decision. Public engagement is “critical.”

“I think this is going down a road that’s not appropriate for our democracy,” Trauner said. “In fact, it lets the agitators win.”