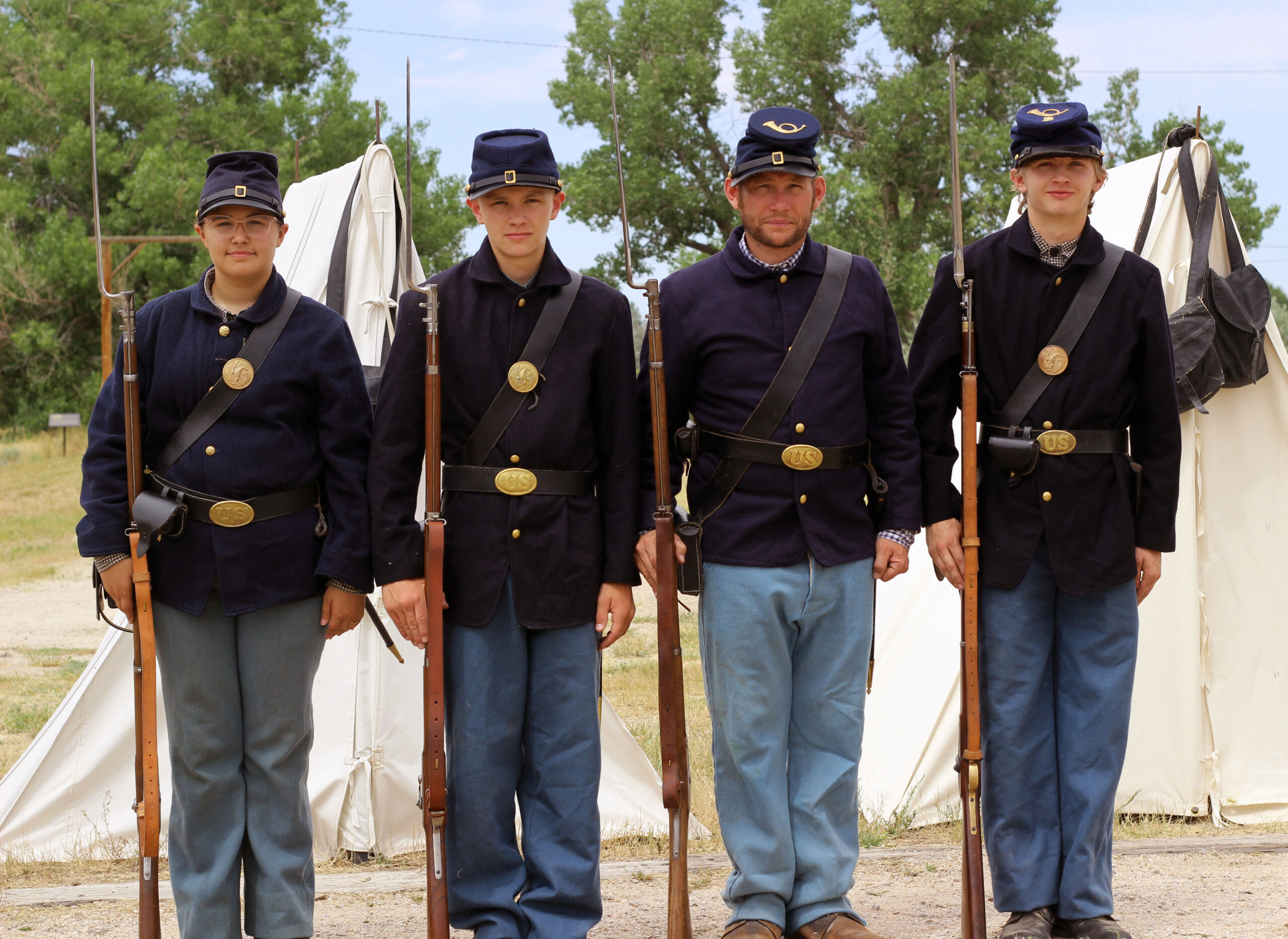 Members of the Sixth U.S. Infantry Company B pose with their muskets before their firing demonstration at Casper Collins Day. (Sara Sammons/Oil City News)

A variety of 19th century characters interacted with visitors, displaying their skills and providing historical information.

B Company of the 6th U.S. Regular Infantry, commanded by Nic Skalicky, performed a firing demonstration at the event, loading and shooting their muskets in the same manner as soldiers would have done in the Civil War.

“We did have regular troops out here in the 1860s,” Quartermaster Sergeant-uniformed Jim Robinson explained in an introduction to the shooting demonstration. “Now, 1863, 1864 comes around, and a civil war — the American Civil War — is taking place out south. … Who’s president of the Northern troops? Abraham Lincoln. Okay, he’s gonna get reelected … and, of course, the Confederate troops were sent to federal prisons. Okay. Now, how many people want to go to the federal prison concerning the country? Not that many.”

Thus, many Confederate soldiers traded out their uniforms and were shipped out to the Nebraska and Dakota territories — now Wyoming.

“Of course, what we’re representing is … the galvanized Yankee unit that was actually stationed out here in the 60s,” continued Robinson.

After demonstrating how to load and use the period-correct muskets, the infantry fired as many rounds as they could within their allotted time.

Today’s B Company is volunteer, with a lot of students coming from the JROTC program at Natrona County High School. Its hope is to “break into” Kelly Walsh this year, adding more young people who are interested in reenacting history. Established reenactors are beginning to see the hobby decline with a lack of younger practitioners, Skalicky explained.

“[We want to] bring awareness to the hobby, bringing people into the hobby so that we don’t lose the history that we have,” he said. “You know, our goal is to bring that history to life for people.”

Next, reenactors from the 11th Ohio Volunteer Calvary (Chapter of the Sons of Union Veterans of the Civil War) demonstrated how troops would operate on horseback, using pistols. Presenters rode through the course, shooting blanks to pop balloons.

“One thing that’s nice about horses,” said Steve Dacus Jr., “they’re kind of like dogs. You can tell some of them love doing this, and some of them hate it. The ones that love doing it, it’s fun, because, you know, they’re chomping at the bit — literally.”

Nearby, others demonstrated other 19th century work, stitching and making crafts. Kids tried their hands at the Game of Graces, in which two people attempt to pass a hoop back and forth using two sticks.

Many other items were on display for attendees: A sheep wagon sat in the field for viewing, and people could even pull a Mormon handcart. Various supplies lay about, like the shaving kit pictured below. Near the quartermaster’s tent, pots of stew and other period-accurate food hung over a fire on S-hooks. Vendors were set up on the other side of the grounds.

Renowned wet plate photographer Robert Szabo also had a tent, practicing his craft for visitors after his 10:30 a.m. presentation. Warning the young people not to touch, he held a plate up, which was imprinted with a picture of them.

At 1:30 p.m., Brian Carrol, author of “William O. Collins: From the Mayflower to the Rockies with Stops in Between,” gave a lecture inside the museum, signing copies of his book afterward. Veterans Memorial Museum director and curator, State Historical Society President and author Doug Cubbison also gave a presentation on the grounds.

The annual event lasted from 10 a.m. to 4 p.m., with many people visiting the grounds and checking out the museum itself.