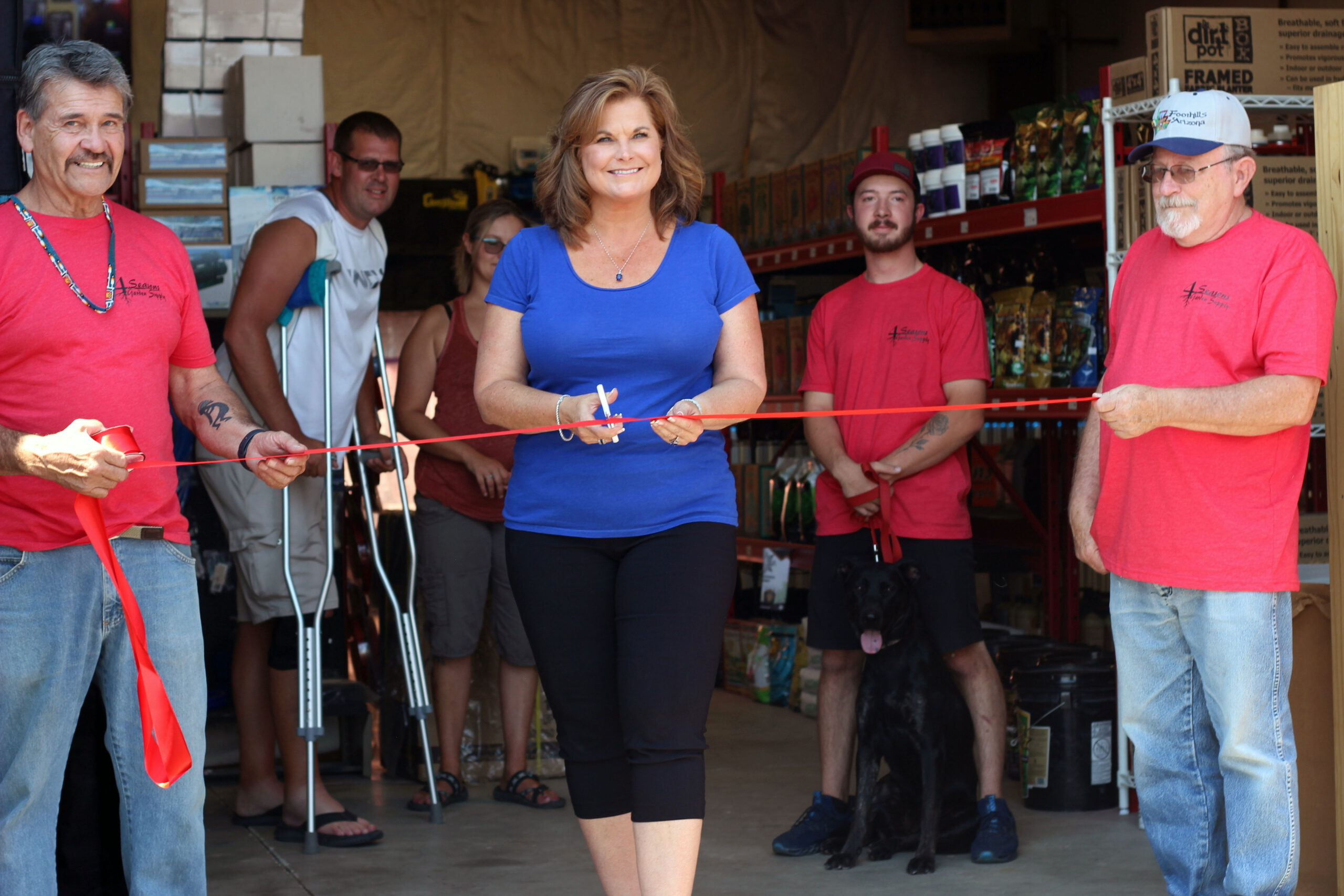 The store at 5104 CY Ave. Suite A has a vast inventory of supplies for growing hydroponics, aquaponics, microgreens and other crops. For Casper citizens, many of the items 4 Seasons sells could previously only be found online.

Casper City Councilmember Lisa Engebretsen cut the store’s ribbon at noon, declaring it open. Employees and friends of the business barbecued outside, and many interested people cycled through the store, checking out the products and displays.

Owners Budd Pitt and Neil Arcuri teamed up to open 4 Seasons after bonding over the crafts of hydroponics, aquaponics and microgreens. Budd was a customer at a previous business of Neil’s, and they’d worked together on Budd’s home greenhouses. Neil is green-thumbed by nature, and Budd, a combat veteran who served in Vietnam, sought to support local veterans by employing them and introducing them to the hobby of gardening.

“Wherever I went, I always had a little garden or something, because that helped me,” Budd said. “I came back from Vietnam and had an extreme case of PTSD; I had no idea what was going on in my head. … I was lost, a lost soul.”

Budd continued the hobby after his second bout of military service, finding it gave him a sense of purpose. Eventually, he was introduced to new techniques.

“I got on YouTube three, four years ago and started seeing things about hydroponics, aquaponics, microgreens,” he said. “I said, ‘I can do this.’ So I built this one right here. It’s the very first one, and I keep it because that thing grew so much it was crazy.”

Budd gestured to the aquaponics system displayed at the back of the store. While “hydroponics” refers to growing plants without soil, aquaponics combines this technique with raising fish or other aquatic animals. The grower creates a natural ecosystem between the animals and plants in which they cycle the same water between themselves.

After the success of his first aquaponics system, Budd decided to build more, constructing three greenhouses containing hydroponics and aquaponics. He was working on the second one when he met Neil, who would later become his business partner at 4 Seasons.

“He came in and just kind of impressed me,” Budd laughed. “He went like this — ‘More nitrogen, too much potassium.’ I said, ‘Whoa, come here! We’ve gotta talk!'”

Neil helped him design and build the second greenhouse, rendering it fully automated. They could control the greenhouse’s temperature, the pH levels and the temperature of the water, which all accelerated the growth of the plants.

“It grew so much that last Christmas, I had to give it away for Christmas presents,” said Budd.

Eventually, the two decided to work jointly to open a store. “We joined forces, finances, all that, and wanted to come up with a concept,” Budd explained. “If people are visual, I thought, ‘Well, let’s do TVs.’ If somebody comes in and doesn’t quite understand microgreens, I’ll flip the channel there and tell them all about it. It helps people.”

Microgreens are another one of 4 Seasons’ specialties. They’re seedlings of normal edible plants, like corn or salad greens, and often contain higher levels of nutrients than their mature counterparts.

“They grow so fast,” said Budd. “Seven, nine days, you’re ready to eat it. Five, 10 times more nutritious than the actual food itself.”

Budd works with the state of Wyoming offering outreach to combat veterans, and found ways to combine the two passions. He recounted presenting to veterans in staff in Sheridan, showing them some microgreens and teaching them about the process. The greens he brought, sweet corn, were a huge hit with attendees, and now the facility grows the plants and serves them in its cafeteria.

Also a member of the Cheyenne River Sioux Tribe, Budd works with the Wind River Reservation Shoshone and Arapahoe councils to bring hydroponics and aquaponics there. Budd and his associates plan to put circular hydroponics into existing greenhouses on the reservation, which would yield faster growth and use less water than traditional soil.

Most of all, Budd wants to run the store by its tagline, “Veteran strong.”

“What ‘veteran strong’ means to me is that this has started with a veteran, and we want all the strength that these veterans can give us to come together,” he said. “When you have strength, you have stability, you’re confident. Strong, to me, is having these people come together and be able to come together. … I want to know that we have something going on that really helps veterans.”