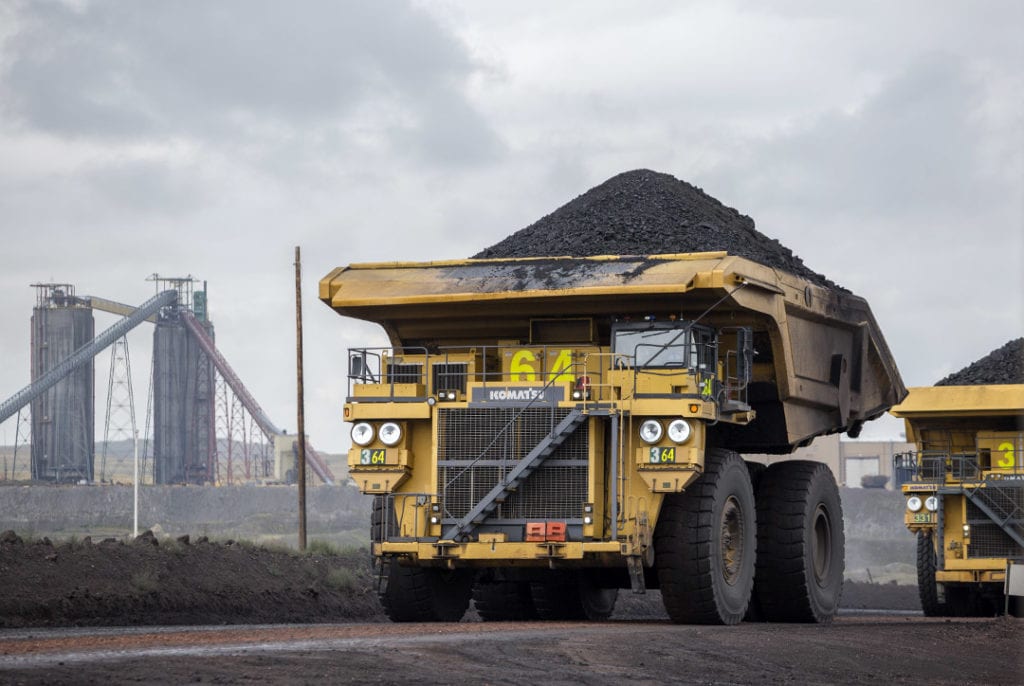 Trucks haul coal from the pit to be dumped into bays on Aug. 15, 2017, at the Antelope Mine in Converse County, Wyoming. (Dan Cepeda, File)

But it is their metallurgic coal mines — which sell to steelmaking customers — in the eastern U.S. and elsewhere outside Wyoming that are proving most lucrative.

Global demand for all types of coal is rising due to recovering economies, high natural gas prices, renewable-energy supply-chain challenges and the global flight from Russian energy sources, according to the companies.

The situation for Arch and Peabody’s Wyoming coal operations, however, is more nuanced and only underscores the fast-moving, inevitable decline of Wyoming’s coal industry, according to one industry analyst.

“The contrast is extraordinary between two companies that, in theory, should be reporting somewhat similar results but, instead, they’ve gone in two completely different directions [in Wyoming],” Institute for Energy Economics and Financial Analysis’ Energy Data Analyst Seth Feaster told WyoFile.

Arch and Peabody face the same labor force issues, limited railroad performance, rising fuel and other increasing operational costs as they try to take advantage of what Feaster described as a temporary “bonanza” for Powder River Basin coal, both in pricing and demand.

Their financial performance in Wyoming during the second quarter, however, differed greatly. Arch saw about $5 per ton profit while Peabody lost about 11 cents for every ton of coal it mined in the basin.

That’s likely because Peabody continues to invest portions of its earnings back into PRB coal for future operations, according to Feaster. Arch, however, is not making those same Wyoming investments and is instead setting aside its Powder River Basin earnings to close those mines and pay for required reclamation work.

Despite current market conditions for Powder River Basin coal, its primary customer base — U.S. utilities — is rapidly shifting away from coal, according to Feaster.

“Arch has been a little more clear-eyed about the long-term outlook for coal in the PRB,” Feaster said. “They’re positioning themselves very well to make money right now by not pouring more money into those mines.”

Betting on or ditching Wyo coal

Combined, Arch and Peabody account for more than half the coal production in Wyoming’s Powder River Basin — the largest coal-producing region, by volume, in North America.

Demand for Powder River Basin thermal coal, which is almost exclusively burned to generate electricity in the U.S., continued to rise this spring with Arch and Peabody enjoying spot prices of nearly $17 per ton. Typically, PRB coal has sold for less than $10 per ton on the spot market.

“With the hot weather and high natural gas prices, customer demand is very strong and all Wyoming [coal] producers are working to meet it,” Wyoming Mining Association Executive Director Travis Deti said. “Almost every operator has added employees and some are looking to hire more. We are looking at a relatively strong production year.”

The recent surge in demand has been so strong that railroads have not kept up with orders for Powder River Basin coal, forcing both Arch and Peabody to delay some of their 2022 contract deliveries from the PRB until 2023, the companies reported.

But, Peabody lost an average of 11 cents on every ton of coal it produced in the PRB “primarily due to lower production volume and higher fuel costs” and increasing “overburden removal costs,” according to the company’s quarterly report.

Meantime, Arch reported that its U.S. thermal coal operations — primarily the Black Thunder mine in the Wyoming PRB — produced a positive cash margin of about $5 per ton while facing the same pressures as Peabody’s PRB operations.

The discrepancy between the two PRB coal giants is primarily due to the fact that Peabody is maintaining its Wyoming operations for future production while Arch is preparing to close its PRB mines, promising its investors that it will “extract value” out of the facilities until the gates are closed.

Arch plans to close its Coal Creek mine this year. It has begun preparing its flagship Black Thunder mine for closure, too, but has not indicated a target date.

“Frankly, we’re not going to spend a lot of money out there,” Arch President and CEO Paul Lang told reporters on a press call Thursday. “We’re going to keep [Black Thunder] going so long as we get good returns.”

Arch has stepped up reclamation work in recent years to eventually close all of its western thermal coal operations while also funneling cash into a “thermal mine reclamation fund” to fulfill its reclamation obligations. The current uptick in demand and pricing for volumes from those coal mines is essentially generating more than enough cash to pay to close them, Lang added.

“We’re not going to do anything to screw up this cash-generating capability we got out there,” Lang said. “We’re just going to try and play it smart and do the right thing by the employees and the other stakeholders, and we’re not going to be chasing a lot of prices.”

Asked whether Arch is tempted to change course and reinvest to extend the life of its Wyoming and other thermal coal operations, Lang said, “That’s a really easy answer. No.”

Unlike Arch, Peabody — which operates the North Antelope-Rochelle, Caballo and Rawhide mines in Wyoming — has not stated an intention to exit Wyoming’s Powder River Basin.

“We continue to explore sales strategies that position Peabody to be the long-term producer of choice for our customers’ long-term supply security,” Peabody Energy President and CEO James Grech told reporters on Thursday.