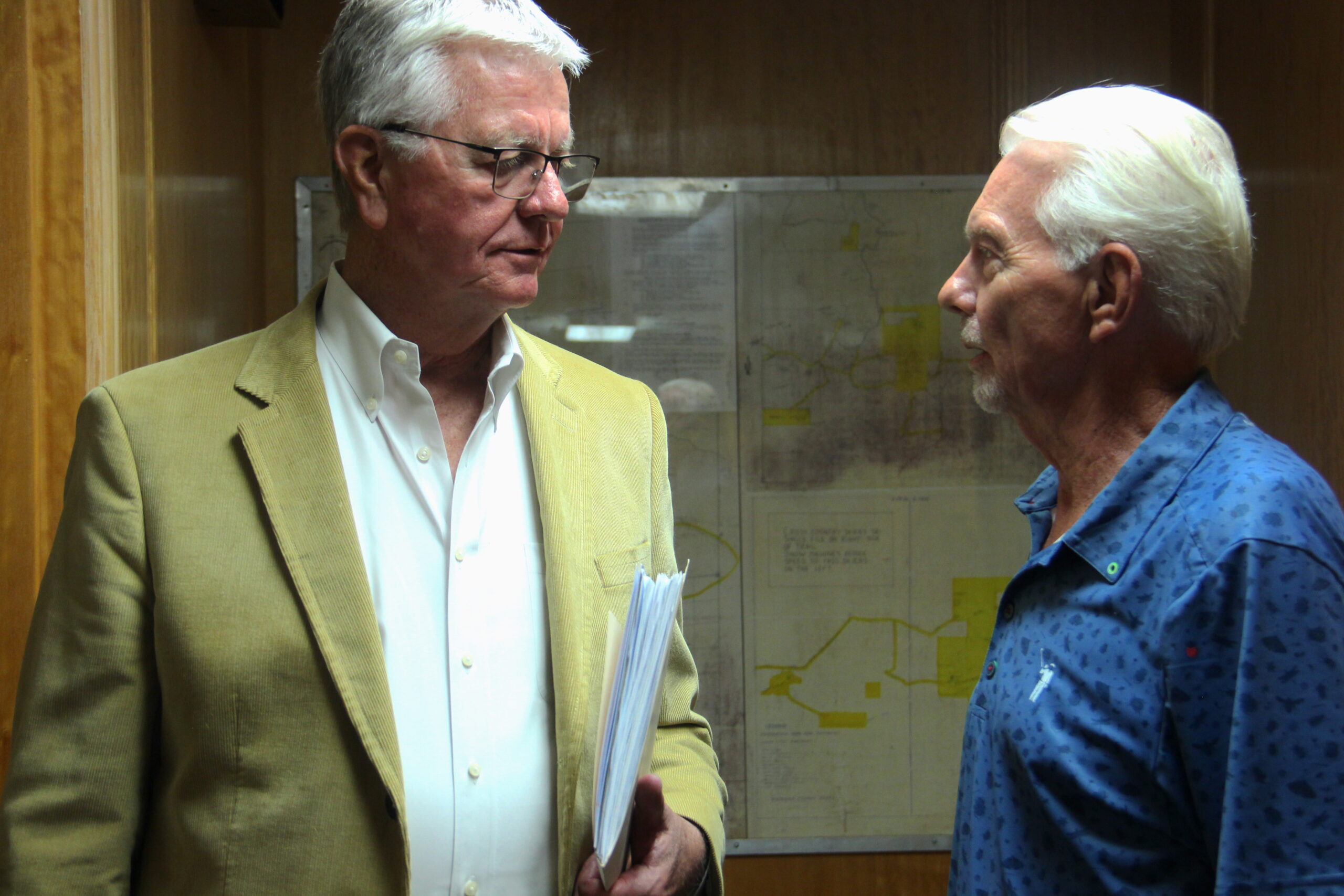 CASPER, Wyo. — Casper attorney and former deputy Natrona County attorney Tom Green says he’s just one of thousands of property tax protesters who have been shortchanged in the appeals process by “misrepresentations of the law” and deprivation of evidence.

“Since these appeals have been going on, the county attorney’s office and tax assessor’s office have been virtually in lockstep to defeat taxpayers’ appeals illegally by, first, withholding discovery and other information that they are statutorily entitled to receive,” Green told the Natrona County Commission during public comment at its regular meeting Tuesday, Aug. 2. He appeared with attorney and commission candidate Dallas Laird, whom he endorses. Laird has previously voiced similar concerns to the commission.

Green served as a deputy county attorney under Eric Nelson for most of 2021. Green said he resigned in disgust over the proceedings in his appeals case from that year, which he argued on his own behalf while working in the same office as deputy county attorney. Charmaine Reed was opposing counsel representing the assessor in the case. The situation grew increasingly “untenable and unsustainable,” Nelson wrote in a document related to the case, stating Green’s employment with the county lasted “until approximately noon on Oct. 24, 2021.”

The specifics of Green’s case are detailed later in this article. Green said he’s been in contact with dozens of other property tax protesters whose experiences mirrored his own in that key evidence pertaining to their cases was not produced when demanded, as provided by statute.

The State Board of Equalization’s administrative rules regarding appeals (Section 9, Chapter 6) are derived from statute and state that a tax protester is entitled to review key documents relating to tax calculations within 30 days of the hearing. Those include Statements of Consideration, all the valid market sales in a Land Economic Area that are used to determine land values.

Former Johnson County Assessor Cindy Barlow told Oil City News she represented or advised on several hundred accounts in the 2020 hearings, during which over 1,900 formal appeals were filed.

Barlow said she was able to get SOCs for “none of them.”

“In Natrona County your people could not even get the documentation they needed to have good exhibits in 2020,” Barlow said. “They requested it all summer long, and got crickets from Charmaine and [Assessor Matt] Keating.”

In December, Barlow said her client finally got access to the requested information.

In its review of that case, the State Board of Equalization acknowledged that Keating was “unable to strictly comply with the statutory information disclosure requirement because the information was not organized, the Assessor was preparing for hundreds of appeals, and the COVID-19 pandemic limited the Assessors Office’s ability to respond.”  The case was remanded back to Natrona County, where the hearings will continue.

Keating told Oil City News that when he took over the position in 2019, the assessor’s office was “a mess” and that SOCs had not been organized in any appreciable fashion. Correcting the situation was an ongoing project throughout the year.

“Were they disorganized? Yeah, we hadn’t gotten to them yet,” Keating said. “But we allowed him access. Where did I fail? I failed to actually print off and hand him the SOCs. But I did provide him with a searchable disc with all the sales in Natrona County.”

In subsequent years, and today, Keating said he’d absolutely be able to provide that information to anyone who asked. Because Wyoming is a non-disclosure state, SOCs can only be provided to those protesting their assessments during the exchange of evidence process leading to a contested hearing.

Few protesters actually request the information, Keating said. Barlow told a legislative committee last year that even with the evidence in hand, ordinary citizens are often at a loss as to how to use it to build their case.

Barlow said Reed and the assessor’s office provided “sales analyses,” a downstream product derived from SOCs, during the hearings.

During appeals, the county attorney can represent either the commission or the county assessor, but not both at the same time. In 2020, Nelson’s deputy, Charmaine Reed, represented the assessor on most of the cases where appellants actually showed up for their hearings.

Reed was unavailable early in the week, but Nelson spoke generally on his recollection of the cases.

“My understanding is that the SOCs that were relied upon, when they were requested, the assessor’s office would give a printout of those Statements of Consideration. It’s basically a summary of those SOCs.”

“By and large, my understanding was that everyone who received those were generally satisfied with that,” Nelson said.

“I would push back on the notion that there was widespread effort to not provide requested information,” he added.

Green has a different assessment.

“They misrepresent to the taxpayers, just generally, all along the line, that they’re not entitled to SOCs, or it’s too burdensome for them to produce it, or they don’t have them, and they intentionally drag out the process so the taxpayer doesn’t have a chance,” Green said.

Green also reiterated the particulars of his 2021 appeal, which he represented on behalf of himself and three other property owners who own four parcels near their homes on Garden Creek Road. Wishing to protect their viewsheds, they recorded a covenant in the county in 2002 vowing the tract would remain undeveloped.

Green and the others protested the valuation of that land, saying it should be valued like other parcels restricted from development through Covenants, Conditions, and Restrictions, which can be filed by HOAs or included in developers’ subdivision plats.

Green said he requested valuations of other restricted parcels at his hearing. “I was asking that they take into account this ‘intangible feature,’ which you are required to take into consideration by case law.”

“[Nelson, Charmaine and the assessor] said they don’t track it under the description I set forth in my request,” Green said. His request for discovery was for the valuations of other parcels he’d identified in the county that were listed as “restricted use” and valued uniformly at $500 a parcel.

Keating and Nelson disagreed that Green’s protected land was comparable to those other restricted parcels, which Keating defined as truly “unbuildable” due to terrain or utility easements. Keating confirmed that his office does not track parcels encumbered by covenants. Thus, the other unbuildable parcels didn’t figure in calculating Green’s tract. Their use as evidence would then have to be approved by the commission. Nelson wrote that Green’s requests were improperly issued.

Keating added that the covenant on Green’s tract could be reversed. Furthermore, the protected viewshed might as well effectively raise the property values of the landowners who enjoyed it.

“It would be robbing Peter to pay Paul,” Keating said.