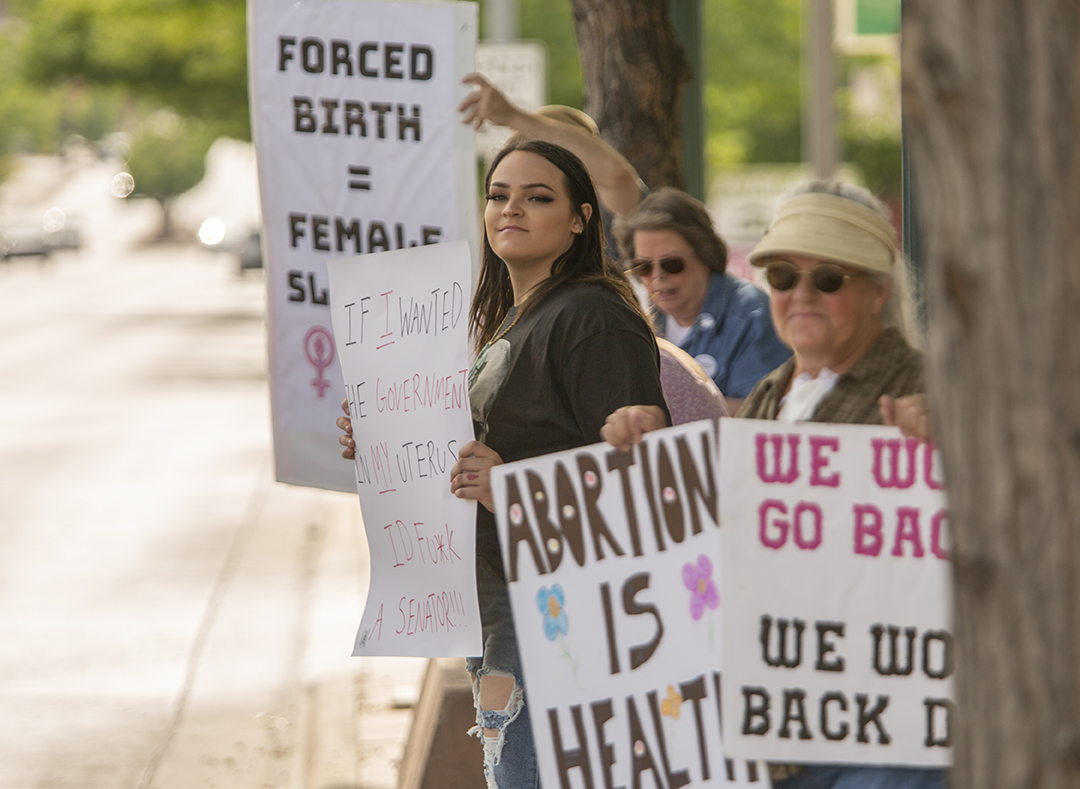 Pro-choice protesters stand in front of the Wellspring Health Access clinic on Thursday, July 28, 2022, in Casper. The protesters showed up at the vandalized and vacant clinic to show support for a court ruling against Wyoming's trigger law that would ban abortions. (Dan Cepeda, Oil City News)

The temporary restraining order issued last week against Wyoming’s abortion ban is only the first step in what is likely to be a more prolonged battle in the courts — one that legal experts believe could ultimately end up before the Wyoming Supreme Court.

While the TRO only protects abortion access until next week, one expert explained the standard for granting the rare motion is extremely high, an indication that plaintiffs may be successful in future proceedings.

Owens reasoned in her motion granting the TRO that Wyoming’s law banning abortion could result in a delay or denial of “evidence based medical care” for Danielle Johnson, a pregnant plaintiff, and that Dr. Giovannina Anthony, an OB-GYN who’s practice provides abortions, could be subject to “a loss of customers, loss of goodwill, and threats to the viability of her business.”

Owens also wrote “the statute lacks any guidance on the provider’s use of medical judgment as to when to provide necessary care.”

In the meantime, both plaintiffs and defendants are preparing arguments for a preliminary injunction hearing on Aug. 9 while doctors and women across the state contend with the potential of losing abortion access.

A rarely used legal instrument, temporary restraining orders are only granted when a judge determines that there’s a risk of immediate and irreparable harm, according to University of Wyoming law professor Kenneth Chestek. The order maintains the status quo — in this case legal access to abortion — for a brief period of time until more in depth hearings can take place.

The temporary restraining order issued by Owens is set to expire at noon Aug. 10. The court is scheduled to decide Aug. 9 whether to grant a preliminary injunction.

If granted, abortion will remain legal until the final hearing on the merits of the case against the ban, Chestek said.

While the defense could appeal the preliminary injunction, Chestek thinks that’s unlikely. There’s a high threshold that must be met to appeal “interlocutory orders,” such as the TRO, Chestek said. Further, the time between the preliminary injunction and the final ruling likely won’t be long. The judge could potentially make both rulings on the same day, if she feels she has enough evidence to determine the constitutionality of the ban.

Such a ruling on constitutionality will be the last decision by the district court, which may require hearings beyond next week’s before reaching its conclusion. If the judge rules the abortion ban unconstitutional, a final injunction would go into effect and the procedure would remain legal in Wyoming.

If the judge issues a final injunction, the state is likely to appeal the ruling and the case would then head to the state Supreme Court, observers say. The timeline for resolving Wyoming Supreme Court cases is unpredictable; Chestek said it could take a year.

Similar legal battles are simultaneously unfolding in other Mountain West states with abortion ban trigger laws like Wyoming’s. In Utah last month a judge granted a preliminary injunction preventing the state’s abortion ban from going into effect before a ruling on the constitutionality of the law. Meanwhile, the Biden administration’s Justice Department is suing Idaho, claiming the state’s abortion ban violates the Emergency Medical Treatment and Labor Act.

The granting of a temporary restraining order in Wyoming is a good sign for plaintiffs, Chestek explained.

“The standards get lower as you get further into the process,” Chestek said. “So having success at the early stages is a pretty good indicator that you’re likely to have success later on.”

Jay Jerde, special assistant to the attorney general, argued in a brief that “plaintiffs have not made a clear showing of probable success on the merits.”

He argued the Wyoming Constitution contains neither an explicit nor implicit right to abortion.

For example, the plaintiffs’ lawyers pointed to article 1, section 38, a constitutional clause passed in 2012 which states, “Each competent adult shall have the right to make his or her own health care decisions.”

In the hearing last week, the plaintiffs said abortion is health care and therefore protected under the health care amendment in the constitution.

The court should determine the intent of the legislators and voters who passed the amendment, Jerde wrote, arguing it was in response to the Affordable Care Act and not intended to protect abortion care.

The women and groups who challenged also alleged it violated myriad other constitutional rights including “equality, due process, uniform operation of the laws, family composition, privacy and bodily integrity, conscience, and access to health care.”

The state countered that the constitution’s equal protections clauses were not pertinent because the abortion ban focused on anyone performing an abortion, not pregnant women, and those performing abortions were being held to a uniform standard.

“The statute cannot infringe upon a right that does not exist,” Jerde wrote.

Plaintiffs filed a memo in support and a new motion requesting a preliminary injunction  Wednesday afternoon.

In the memo of support, plaintiffs’ lawyers argue if the TRO is allowed to expire, “the Wyoming Criminal Abortion Ban will have a catastrophic impact on Plaintiffs and Wyomingites alike. The Act will force many Wyomingites seeking abortion to carry pregnancies to term against their will with all of the physical, emotional, and financial costs that entails.”

The lawyers also state in the memo that it is up to the defense to show the proposed regulation is “narrowly tailored to achieve a compelling state interest.” Lawyers claim abortion is both time sensitive and constitutionally protected, writing “the loss of a constitutional right alone is sufficient to justify injunctive relief.”

They also noted roughly 20% of Anthony’s and Dr. Rene Hinkle’s pre-natal patients are high-risk, and the abortion ban wouldn’t allow the doctors to provide the “evidence-based care needed when any of them develop complications requiring preservation of the health of those patients.”

“In sum, pregnancy and parenting are hugely consequential events in Wyomingites’ lives, and being denied an abortion has long-term, negative effects on an individual’s physical and mental health, economic stability, and the wellbeing of their family, including existing children,” the memo states.

While abortion will remain legal in Wyoming until at least next week, women and providers must deal with an uncertain future.

Dr. Julie Amaon, medical director of Just the Pill, an online abortion pill provider, wrote in a statement, “Just The Pill is in close contact with lawyers who are following the legal changes in Wyoming. There is certainly the day to day reality of starting and stopping care based on the legal back and forth in any state.”

Anthony, one of the plaintiffs in the case and a provider at the only clinic in the state to provide abortions, said there’s “a lot of fear, a lot of confusion and panic.”

Before last week’s TRO hearing, she’d moved up all her patients’ appointments for medication abortions to Monday and Tuesday in case the procedure became illegal Wednesday.

Patients not only call with questions about the current legal status of abortion in Wyoming, but wondering whether contraception like IUDs would still be legal.

“When a patient comes in to talk about contraception it’s a whole new mindset,” Anthony said Tuesday. “Women are scared and panicked and don’t know where to turn and are pursuing more aggressive birth control through sterilization, or IUD.”