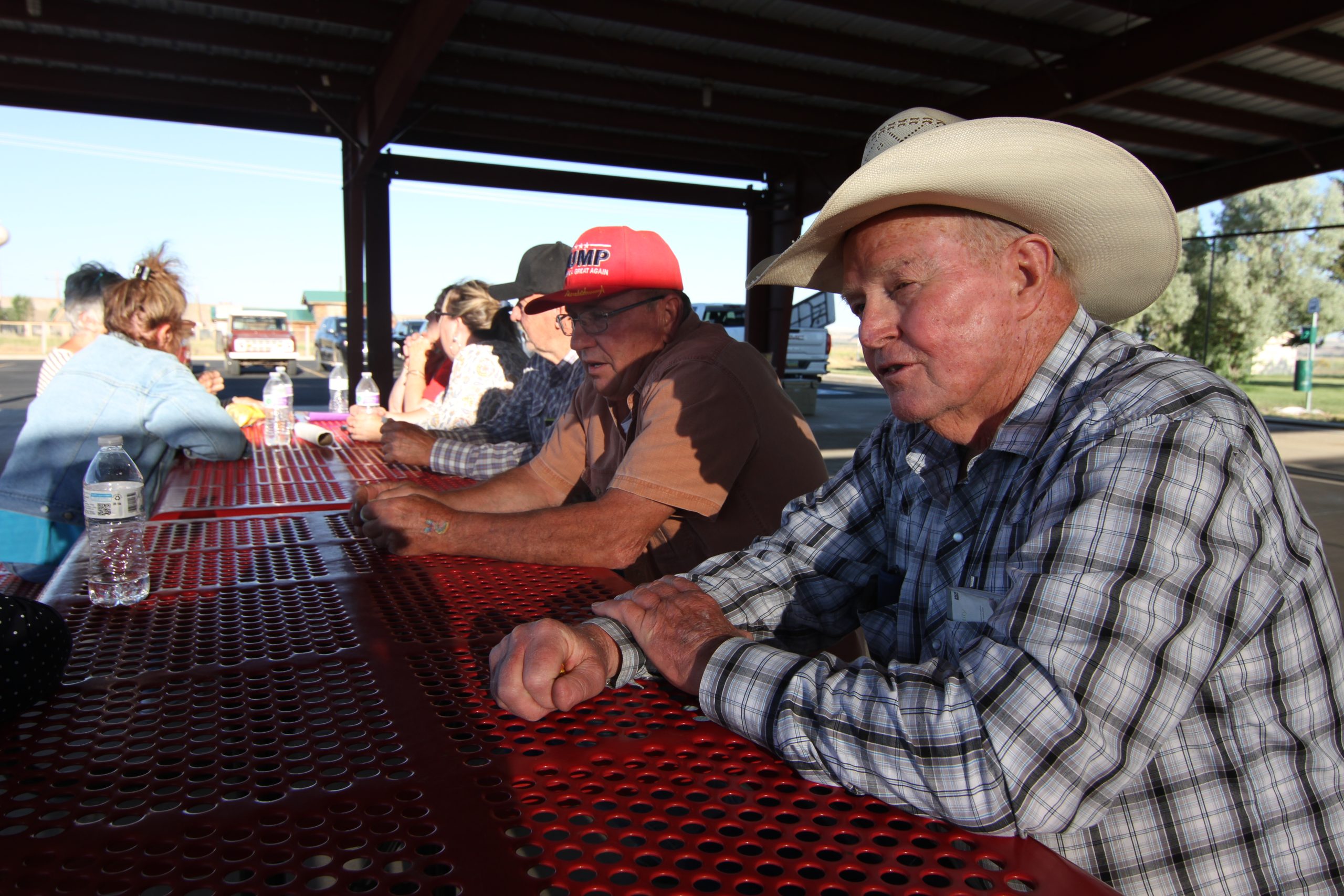 Statewide, candidates who claim to be the real conservatives are looking to push out lawmakers considered the moderate establishment. The balance of power in the Wyo Legislature is up for grabs.

The Big Piney denizen was particularly fond of how Schmid traveled to Washington, D.C. on Jan. 6, 2021 to join a crowd of protesters who gathered in support of voted-out former President Donald Trump. That gathering infamously went sideways — Schmid said he did not take part in the violence — but nevertheless, Profit just liked that he was there.

“He went down there to the cotton-picking deal, and stood up,” Profit said.

Toni David, who stood nearby cradling her Yorkshire terrier, Dolly, was equally appreciative of Schmid’s presence outside the U.S. Capitol on that historic day some 1,700 miles away.

“I’m proud of the fact that Mike was there,” David said.

Schmid didn’t mention Jan. 6 when he gave brief remarks to about 15 family members, friends and townsfolk gathered at the park in support of his run against District 20’s incumbent Rep. Albert Sommers (R-Pinedale). But Schmid’s participation in the rally at the Capitol that led into a violent attack says a lot about the Republican faction he identifies with. It’s a camp of conservatives, aligned with Trump, who have appeal with some residents of Sublette County, a sparsely populated high desert region bounded by the Wind and Wyoming ranges.

Exactly who dominates and what defines the Wyoming GOP is in flux, but  there’s a wing of the political right, who fashion themselves as the “true conservatives,” that includes the 20 or so members of the Wyoming House Freedom Caucus and the “six pack” conservative members of the Wyoming Senate. The Tuesday Republican primary will determine whether or not the statehouse tilts more or less in their favor, and whether the Legislature’s Republican establishment is still able to easily out-muscle the smaller, though growing, far-right faction.

Sommers — the current House Majority Floor Leader who’s likely to be the next Speaker of the House — is facing his first challenger in a primary since being elected a decade ago. The fourth-generation cattleman door-knocked in a Pinedale-area subdivision while Schmid picnicked, and says he saw the primary election challenge coming as soon as Legislature’s 2022 budget session adjourned.

“I thought a group was going to come after me,” Sommers said. “The group is the extreme far right, that’s how I wish to name it. Mike [Schmid] appears to have aligned himself with those [politicians].”

In Wyoming, the test of Trump and candidates the former president has endorsed starts with the U.S. House of Representatives race, where incumbent U.S. Rep. Liz Cheney is being challenged by Trump’s hand-picked proxy, Harriet Hageman.

“This is the real test of Trump,” former U.S. Sen. Al Simpson told WyoFile in February.

Despite raising record-breaking funds for a Wyoming congressional campaign, Cheney faces an uphill battle. Polling data suggests the daughter of former Vice President Dick Cheney trails by more than 20 percentage points in the race, though some analyses suggest the window is still open for a Cheney victory.

The Trump-aligned candidates versus GOP establishment dynamic trickles down the ballot partly because the former president, who has rallied in Wyoming, has weighed in on statewide races via endorsements of the most hard-lined candidates: incumbent Curt Meier for state treasurer, Rep. Chuck Gray (R-Casper) for secretary of state and Brian Schroeder for superintendent of public instruction. The same endorsements haven’t materialized for Wyoming legislative races, though oftentimes candidates for the House and Senate have staked a claim in one of the two camps.

Like Schmid, and Wyoming Republican Party Chairman Frank Eathorne, Ide was in Washington, D.C. on Jan. 6, 2021. Photos and video show him close to the Capitol during the insurrection. Ide did not respond to WyoFile’s request for an interview, but he branded himself a “true conservative” who vowed to “NEVER” vote in favor of any new taxes or fees, according to his campaign website.

When it comes to Trump’s claim the election was stolen, Perkins, who’s an attorney, has stood behind determinations of judges from around the country, including judges Trump appointed who later dismissed his allegations of elections fraud.

“I think that when the votes were counted, President Biden had more electoral votes than President Trump,” Perkins said. “Were there irregularities, sure, but I’m still waiting for the hard evidence.”

Perkins doesn’t make much of how he and others are portrayed by more extreme challengers.

“These folks always say that they’re more conservative, and I just don’t buy that,” he said. “The biggest difference I’ve seen between myself and Bob Ide is that Bob believes that we shouldn’t be taking federal money. That’s an easy thing to say.”

The reality, the Joint Appropriations Committee co-chair said, is that Wyoming wouldn’t have the ability to upkeep its roads and keep the lights on in its hospitals without federal funds. In the current budget cycle, the Legislature appropriated nearly $2 billion of federal funding.

Relatively big money is pouring into the Perkins-Ide race. The incumbent has raised $58,850, the most of all legislative candidates, according to his filings with the Wyoming Secretary of State. Ide, meanwhile, has cobbled together the second-most funds of all the candidates running for a legislative seat, with $56,220.

As a general rule this campaign cycle, incumbents are getting support from traditional places. Sommers, for example, has taken in donations from the Petroleum Association of Wyoming and Perkins has received donations from the Wyoming Mining

Schmid and Ide, meanwhile, were both recipients of donations from the Brophys, a wealthy Jackson family that has backed anti-establishment Republicans.

“They’re trying to out-conservative me, that’s the game they’re all playing,” Driskill said. “It’s an interesting deal, because I was Trump before they were Trump.”

Driskill described the so-called “six pack” of far-right senators who are looking to add to their ranks as ineffective and “bitter.”

“They talk about the establishment and the insider’s club, and there’s no such thing,” Driskill said. “The truth is, if you want to be an insider in the Wyoming Legislature, you actually learn how to work with the rest of your colleagues … You better figure out how to get the respect of at least 15 other people.”

Fortner, who had a falling out with the House Freedom Caucus, is looking to switch from the House to the Senate. Driskill described his opponent as a do-nothing Wyoming politician. That could be because Fortner was allied with the Freedom Caucus that didn’t have the clout it needed to push its agenda, which included bills banning critical race theory in public schools or preventing day-of crossover voting. Fortner did not respond to requests for an interview.

“What Representative Fortner has done is vote no on virtually everything under the sun,” Driskill said. “Voting no on everything doesn’t make you conservative, it makes you contrarian. You’re just opposed. Our job in the Legislature is to fix problems, not to be a bomb thrower.”

Yet, for the likes of Connett, one of his other challengers, Driskill’s track record in the Legislature is that of a moderate — despite his proclamation of Trumpiness. Connett didn’t want to take shots at his fellow candidates, but thinks the incumbent senator is part of the problem in a Legislature that’s “geared toward a national social justice agenda” rather than the “conservative values of the people of Northeast Wyoming,” he said.

“We have, for the most part, a pretty conservative state — certainly this corner of the state is conservative,” Connett said. “And we don’t perceive our Legislature being the same way.”

In Sen. Larry Hicks’ (R-Baggs) view, it’s hard to say which way the Legislature will swing as a result of Tuesday’s primary. Hicks faces no challengers this cycle, though he was targeted by a far-right gun group last legislative session and anticipated having to fight for his seat.

Hicks predicted that some establishment lawmakers will keep their seats as a result of left-leaning voters changing their registration and crossing over. They might be doing it to vote for Cheney, he said, but there’s bound to be a down-ballot effect.

The outcomes of those elections — like Schmid’s race with Sommers — will provide some insight into whether Trump’s influence on Wyoming politics is abating, stagnate or still ramping up.

At the Marbleton picnic, David, with the Yorkie, explained how Sommers was once her guy. Her longtime representative lost her vote partly because she liked Schmid. Another reason, she said, is she hadn’t heard Sommers vocally disapprove of Cheney, who’s staked her own political career on standing up to Trump.

“I haven’t heard, to this day, whether [Sommers] supports Cheney,” David said. “That’s an important item for me.”

Later that night at his family’s historic homestead, Sommers offered his views.

“I’m not going to condemn anybody,” he said. “Rumor ran around that I support Liz Cheney. I’m not saying who I’m voting for, but I’m not voting for Liz Cheney.”