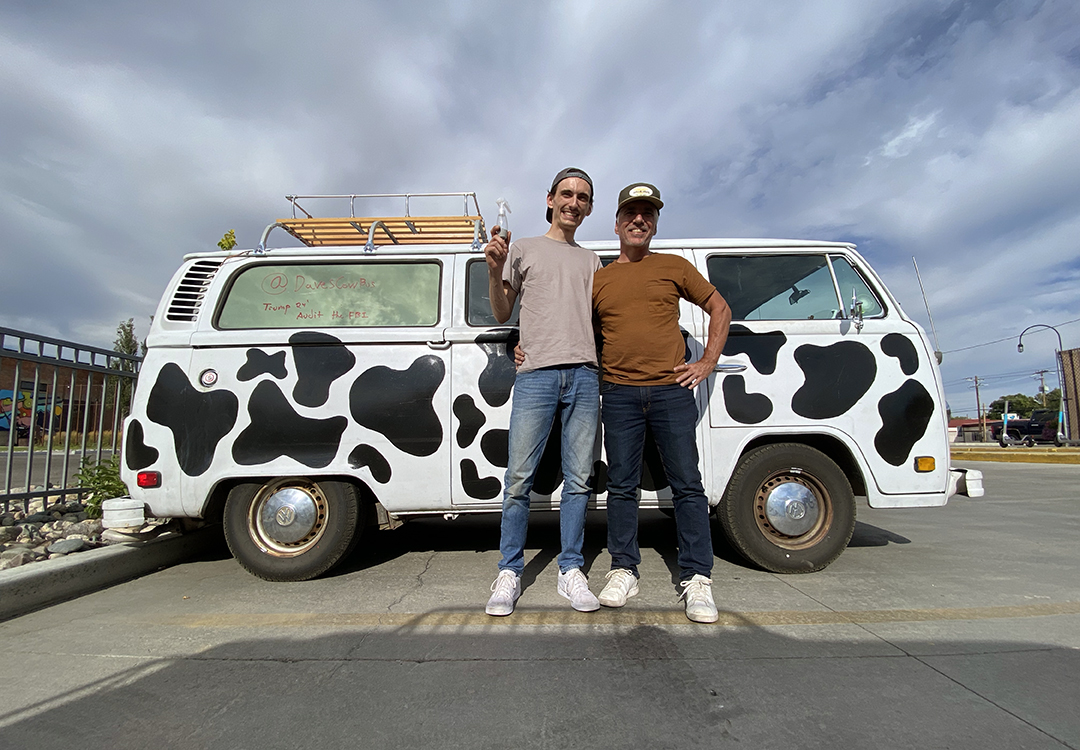 Erik and John Womelsdorf pose with a bottle of David Defazio's ashes in front of their 1976 VW Bus on Sunday at The Office in Casper. The men are making a cross-country trip to spread Dave's ashes. (Dan Cepeda, Oil City News)

CASPER, Wyo. — The distinctive purr of a vintage Volkswagen engine echoed off the buildings in downtown Casper on Sunday afternoon as a white 1976 VW Bus with black spots navigated the nearly empty streets.

The unmissable vehicle soon parked at The Office. John Womelsdorf, 59, and his son Erik, 23, then stepped out of the vehicle.

They were hungry and tired and, with evening approaching, were still hoping to make it to Cody that night. It would be one of dozens of stops on their journey from Caldwell, New Jersey, to the California coast.

Along for the ride are the cremains of a person named Dave Defazio, Erik’s hair stylist’s son, who died from a heroin overdose in 2017.

“She had held on to [the remaining ashes] over the last couple of years, and had the realization that she should be letting go,” Erik said.

“She kept talking about what an experience it would be to spread Dave’s ashes across the country, but she was having trouble finding people who were going on cool trips.”

Fortunately, Erik and John were already planning for this cool trip. The two worked on the VW, using parts from another John had bought and having a more powerful engine installed in Texas.

The two then set out on the American road with Dave’s ashes safely contained in a hairdresser’s spray bottle and a stack of snapshots of the smiling young man who died far too soon in tow.

“She’s been in contact with us ever since,” Erik said. They’ve sent postcards and texts as they’ve left ashes at Mount Rushmore, the Badlands, some campsites and a few bars along the way.

“We want to be respectful, but we also want to celebrate his life,” John said. “So she gets pictures of the three of us, sometimes sitting in a pub.”

The road trip hit a significant snag along the way, the kind that happens when you travel hundreds of miles in a 50-year-old vehicle.

“In Waterloo, Iowa, the steering box broke,” John said. “We found a junkyard that had one Bus they had just gotten the day before, and we were able to get under it, get the steering box, find the tools we needed and put it back together.”

The hassle is worth it for the experience, John said.

As they head west, John and Erik plan to see Yellowstone and Grand Teton National Park, then Zion and Bryce in Utah, and then the Grand Canyon. Further on, they’ll drive California’s Pacific Highway before heading back east, going through Texas and then hopefully to New Orleans during that leg.

Along the way, Dave’s mom, Cherish, will see her son sharing an experience of a lifetime.