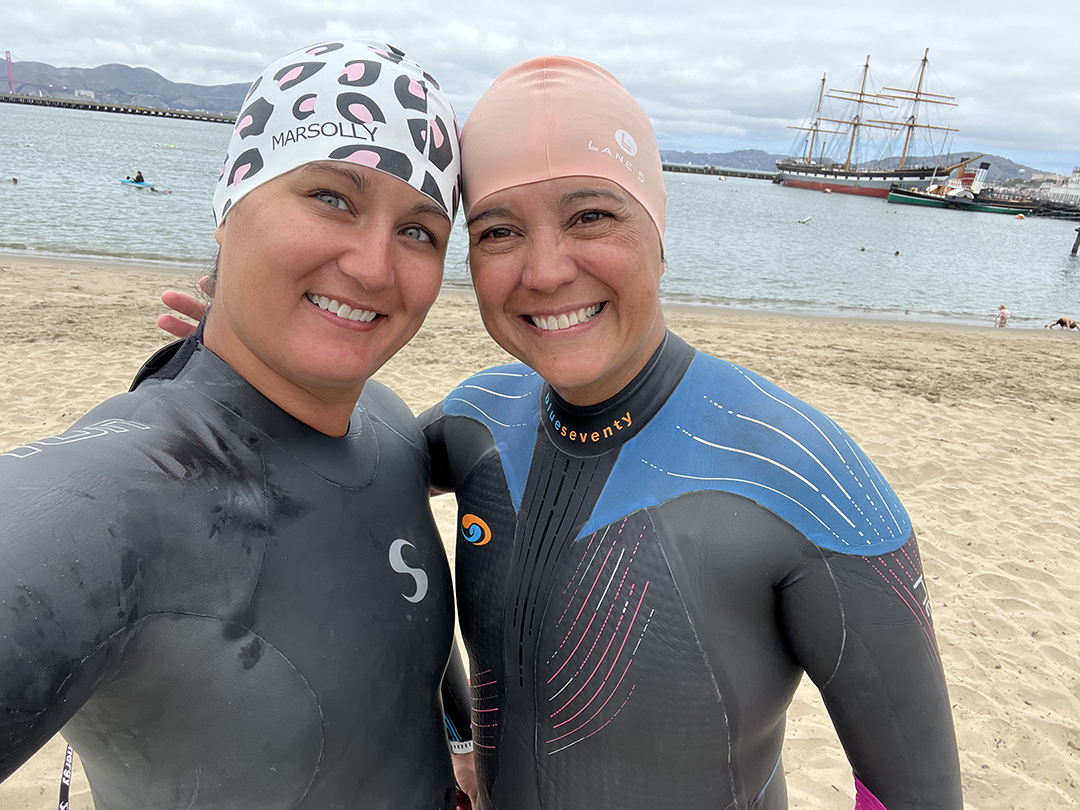 CASPER, Wyo. — A couple of weekends ago, Casper resident Jocelyn Johnson, 34, took a ferry ride from the San Francisco bay out to Alcatraz Island.

This wasn’t a normal tourist’s trip to the infamous former federal penitentiary, however.

“They made jokes as we were going out there: ‘Yeah, you guys are gonna jump off of a perfectly good ferry right into some pretty treacherous water,'” she recalled.

Johnson, 34, and her mom, Sheridan resident Elizabeth Mahoney, had signed up for the annual Sharkfest Swim weeks earlier. The event is inspired by a 1962 incident where three convicts created an elaborate escape plan, with two of them eventually making it into the waters, never to be seen or heard from again.

Johnson, who is the medical director of the Banner Wyoming Medical Center medical unit, has always been athletic. She started seriously swimming in grade school, joined her middle and high school cross-country running teams, and took up distance running in college. She’s run marathons and has done a half-triathlon, among many other races.

Some of these races she does with her mom, who called her earlier this year to say she had signed up for the Sharkfest Swim and asked if she’d like to join in. At first she didn’t give the event’s name much thought.

“At first I thought the shark thing was kind of a myth,” she said, “but when I looked into it I discovered there are like 12 different species of sharks that live in the San Francisco Bay.

“By that point I had already paid for the race so I was kind of stuck doing it,” she added.

She prepared as much as she could before heading out, but the conditions there are quite unlike anything in Wyoming. Temperatures in the choppy waters hover around 60 degrees — plus or minus — and strong currents change direction along the roughly one-and-a-half-mile route.

“At first you jump in the water and it wasn’t so bad,” she said. In fact, she felt a sense of peace and awe as the historic Alcatraz loomed overhead and the iconic Golden Gate Bridge glimmered in the distance.

“I was excited and ready to do it,” she said. Then the swim started.

“There were times when I’d look up and felt like I didn’t make any advancement whatsoever.”

Even after years of difficult races, Johnson called the mental experience of this one “extremely challenging.”

“You have little mind games going through your head while you’re swimming, like ‘Oh my gosh, I’m never going to make it’ and ‘Is that shadow down there a shark?'”

Her mom stayed relatively close behind, and both eventually finished the race within the 75-minute time limit.

“From being in the waves and all that, you kind of come out disoriented and unsteady,” she said, “but it was a pretty cool feeling to finally cross the finish line and finish the race.”

Her 13-year-old son was there on dry land to greet them. “It was so cool to share that experience with him,” she said.

Exhausted and exhilarated in a foodie’s paradise, they made their way to nearby Ghirardelli Square for ice cream sundaes before celebratory drinks and dinner later on. “Lots and lots of tasty beverages,” she said.

Johnson says she had stopped exercising as much during COVID, and hadn’t done a competitive race in a while.

“This was a good jumpstart back into doing races,” she said, adding that “it was a good thing to cross off my bucket list, but I don’t think I would do it again.”

It certainly wasn’t a discouragement, however. A mere week or so after escaping Alcatraz and getting home, she signed up to run a half-triathlon in Boulder next year.