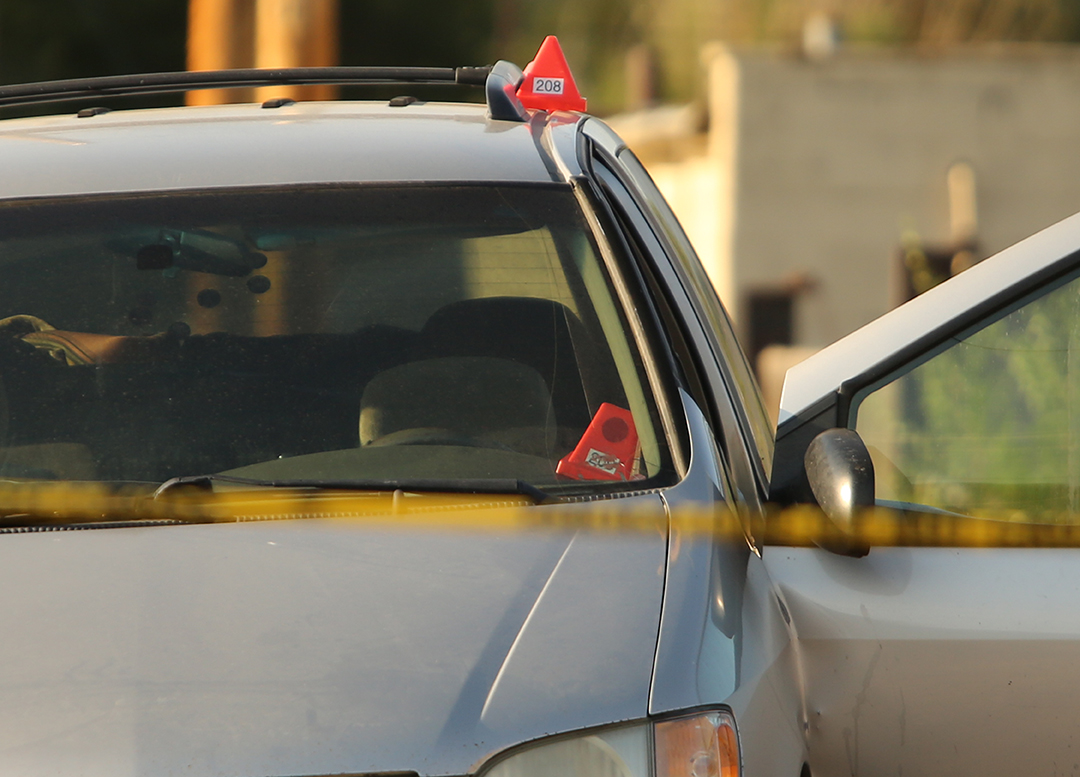 According to a release, the incident started with a police call at about 3:20 a.m. Sept. 2 for a gunshot victim attacked by an assailant in an alley at East K street, between North Durbin and North Wolcott.

The victim had called police after being shot in the head. She was transferred to Banner Wyoming Medical Center, where she continues to be treated for what the release says are “significant injuries.”

Police later identified Kenneth Marion, 68, as the suspected shooter. Multiple officers from various agencies arrived at the 600 block of South Walsh Drive to monitor an apartment where they believed Marion was staying.

The release says Marion ran after leaving the apartment and seeing the officers. He then drew a firearm and pointed it at an officer who the release says was “an experienced veteran of the Casper Police Department.” The officer fired, striking Marion at least twice.

He was given first aid as medical professionals arrived, and was then transported to the Banner Wyoming Medical Center. He was later transferred to a hospital in Colorado, where he is still undergoing treatment.

An investigation is ongoing, said the release, and the Natrona County District Attorney’s Office has filed a warrant for Marion for aggravated assault.

The Casper Police Department has requested assistance from the Wyoming Division of Criminal Investigation to conduct an internal investigation of the shootings.

Casper, Wyoming (September 8, 2022) – On Friday, September 2, 2022, at approximately 3:20 AM, a call was received at the Public Safety Communications Center regarding a gunshot victim.  The victim reported having been shot by an assailant in an alley of East K Street between North Durbin Street and North Wolcott Street.

Officers of the Casper Police Department and Emergency Medical personnel arrived at the scene and discovered that the caller, an adult female, had an apparent gunshot wound to her head.  The victim was quickly transported to the Banner Wyoming Medical Center.  She continues to receive medical care for her significant injuries.

Through the course of our investigation, a solid suspect was identified as Kenneth Marion, 68 years of age, of Casper.  Multiple officers, from multiple agencies, began actively seeking Marion in an attempt to peacefully question him in relation to this incident.  Through our investigation, Marion’s whereabouts were narrowed down to an apartment complex in the 600 block of South Walsh Drive.  Officers began to monitor the apartment where they believed Marion to be.  While so doing, Marion exited the apartment, whereupon officers attempted to contact him outside of the apartment.  As the officers approached Marion, he immediately fled from the officers, on foot, through the apartment complex.  As he fled, Marion drew a firearm and pointed it at the closest pursuing officer. The officer, an experienced veteran of the Casper Police Department, was forced to defend himself from the immediate, deadly threat of Marion’s actions, firing his weapon and striking Marion at least two times.

Marion was given immediate first aid by the officers and emergency medical crews quickly transported him to the Banner Wyoming Medical Center.

Marion was later transferred to a hospital in Colorado where he continues to receive medical care for the injuries he received on September 2, 2022.

As a result of the still on-going investigation, the Casper Police Department, with the support of the Natrona County District Attorney’s Office, has filed a warrant for Kenneth Marion, charging him with aggravated assault in relation to the female victim who had been shot in the head in the early morning hours of September 2, 2022.

We would like to emphasize there is no ongoing threat to the public related to this incident.

Our department continues to work with several assisting agencies on this ongoing investigation.

At this time, we are unable to provide any further information on the medical status of the victim, or of Mr. Marion.

Pursuant to the established policies of the Casper Police Department, the involved officer has been placed on Administrative Leave.

Consistent with the Casper Police Department’s commitment to transparency, they have formally requested the assistance of Wyoming Division of Criminal Investigation (DCI) to conduct an impartial investigation of the incident.  Upon completion of the investigation, the case will be presented to the Natrona County District’s Attorney’s Office for the determination regarding the lawfulness of the officer’s actions.  Any questions regarding the investigation of this officer-involved shooting should be directed to the Wyoming Division of Criminal Investigation.

In addition to the external investigation being conducted by DCI, the Casper Police Department conducts an internal review of any incident involving the use of lethal force by its police officers. This internal review is undertaken to ensure that the policies and procedures of the Casper Police Department were followed, that the guidance provided by those policies and procedures were sufficient, and that the training and equipment provided to our officers are adequate to meet the challenges faced by our officers as they serve our community.

The Casper Police Department is dedicated to the protection and safety of our community through the highest standards of professionalism in police services.