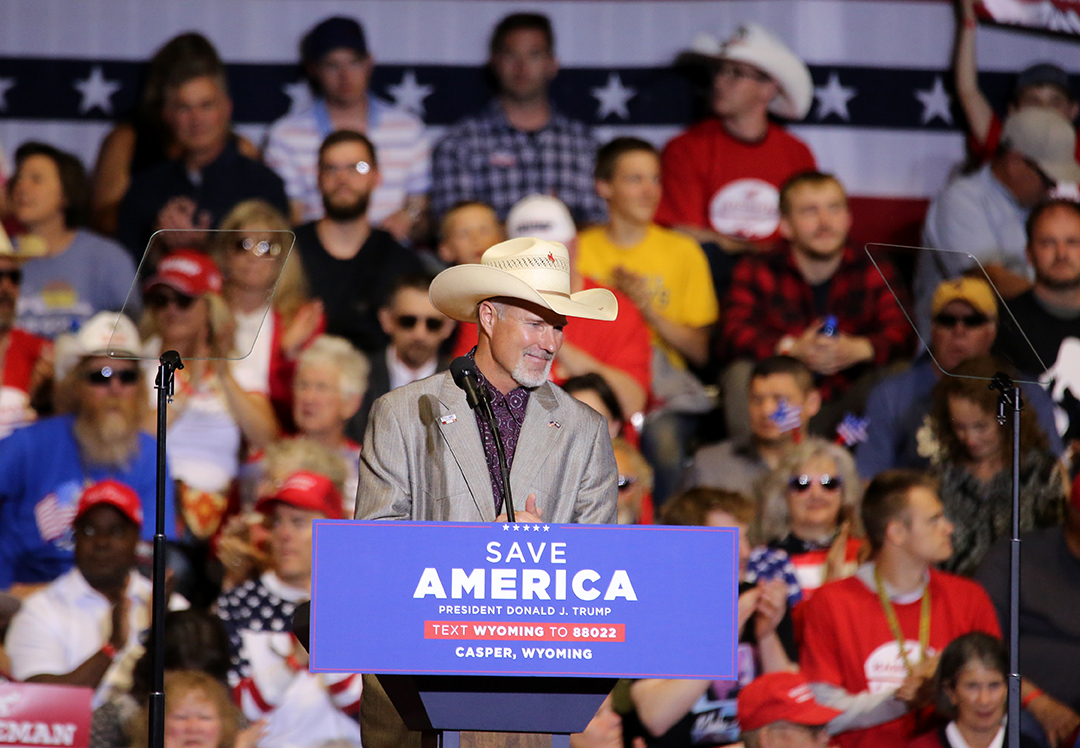 RIVERTON—Brian Shuck surprised Wyoming Republican Party officials Saturday with an announcement that he would forgive $5,000 of what he was owed in legal fees so that the party could sink more money into candidates.

Committeemen and committeewomen filling the hangar-like Chandelle Event Center outside of the Central Wyoming Regional Airport took to their feet, whooped and applauded upon hearing the party legal counsel’s pledge. They’d just endured two hours of discussion about which candidates should get a slice of the $14,500 the Wyoming GOP would mete out to Republican candidates in the upcoming general election, so Shuck’s fee write-off was a nice bump.

“I don’t know if we’re not grasping the concept of what this money is, but it’s not a $5,000 donation,” Correnti told the body. “This is debt relief, and if we apply it to anything other than easing the pain of the $14,500 we’ve already spent, then we’re flipping debt. That’s not how we run our household budgets. We didn’t get any money.”

Correnti’s remarks underscored the difficult financial position of the Wyoming Republican Party, which has run up legal bills for a spate of lawsuits that are nearly 2.5 times what the party will spend supporting candidates in the Nov. 8 general election. Bob Ferguson, the Wyoming Republican Party’s treasurer, told WyoFile that the costs of litigation, plus missing dues from some county parties, have required less election spending.

“We would have a pool of money sitting there that was an additional $80,000,” Ferguson said. “We could have easily spent $50,000 [on candidates]. We could have spent more than $50,000. We currently have enough to run the party for the rest of the biennium, and it would have given us way more money to finance candidates.”

At the mid-September Central Committee meeting, the party had $119,000 in the bank, Ferguson told the Republicans gathered. It costs about $11,000 a month to keep the lights on and pay staff, he said, which means there’s just enough to keep operations going through the fiscal year. The party will need to raise additional money to pay down legal fees and fund any candidate spending that’s been pledged.

“Every dollar we spend today is a dollar we have to raise before the biennium,” Correnti told the state party. “Otherwise, we have no money.”

An ongoing fight with the Natrona County GOP has proven even costlier. The county party, which has called for Eathorne’s resignation, is suing over the procedure the state party used to adopt bylaws that require each county party to pay dues or lose their delegates at the state party’s convention. That’s been a budgetary double whammy for the Wyoming GOP: the loss of dues, plus attorney fees that have eclipsed $27,000.

The Natrona County case was dismissed in district court, but the county party has appealed and filed a petition with the Wyoming Supreme Court. A Natrona County committeeman who was in Riverton by proxy declined an interview request.

A lawsuit out of Uinta County is also diverting Wyoming Republican Party funds. An allegation that Uinta County GOP leadership committed election fraud was dismissed by the Wyoming Secretary of State’s office and in district court, but it too is being elevated to the Wyoming Supreme Court.

And even more litigation may be coming down the pike. Midway through the Wyoming GOP’s Sept. 17 meeting, most non-committee members were told to leave the event center so the party could hear an agenda item Eathorne deemed “confidential.” On the agenda attorney Drake Hill and his wife, former Superintendent of Public Instruction Cindy Hill, were slated to present “the Playbook.”

In 2013, Cindy Hill challenged a state law that stripped her position of many of its authorities and won in Wyoming Supreme Court. Similar dynamics are playing out nearly a decade later, as some lawmakers seek to restrict the election-related authorities of Wyoming’s secretary of state. Republican nominee and election fraud conspiracy theorist Rep. Chuck Gray (R-Casper) is running unopposed in the Nov. 8 general election and is widely expected to win the office.

In its budget planning, the GOP earmarked $50,000 for candidate spending, but even with Shuck’s surprise $5,000 write-off the party will dole out just less than 40% of that intended amount.

The $14,500 in funds the Wyoming GOP did allocate for candidates are predominantly going toward contested races the Republicans deemed “winnable.” The Republican Party has long enjoyed a dominant supermajority in both chambers of the Wyoming Legislature, and the August primary election determined that advantage will persist for at least the next two years: Democrats are absent from 10 of 16 Senate contests and 43 of 62 House races.

County representatives made a case for each of those candidates receiving funds, and in some cases so did the candidates themselves and others. Uinta County committeeman Karl Allred, for example, spoke to the need to support McCollum — father of fallen Marine Lance Cpl. Rylee McCollum — and take down Yin.

“If any of you have met him or dealt with him in any committee meetings, the guy [Yin] is a flippin’ idiot,” Allred said. “And we need to get rid of him.”

Censure and shots across the bow

In its two-day meeting the Wyoming GOP Central Committee also censured Sen. Cale Case (R-Lander) and condemned his efforts to seek an independent candidate to challenge Gray in the general election for secretary of state. The party also voted to make the symbolic move to no longer recognize Republicans who run in the general election as independents or under another party’s flag.

The assembly also set party priorities for the Wyoming Legislature’s 2023 general session. Revising Title 22 of the Wyoming Election Code to close primaries and prohibit party-registration changes will be the party’s main aim. Other goals include improving election integrity, developing pro-life legislation and imposing no new taxes except for a “parity tax” on renewable energy. Downlist priorities were to have “no protected classes of people,” oppose any legislation seeking to legalize or decriminalize marijuana and call for an audit of the federal government.

Because of public notice requirements, the GOP Central Committee did not go through the selection process for interim secretary of state candidates following the early departure of Secretary of State Ed Buchanan. That selection will instead take place at 1 p.m. Sept. 24 at the Wind River Recreation Center in Pavillion.