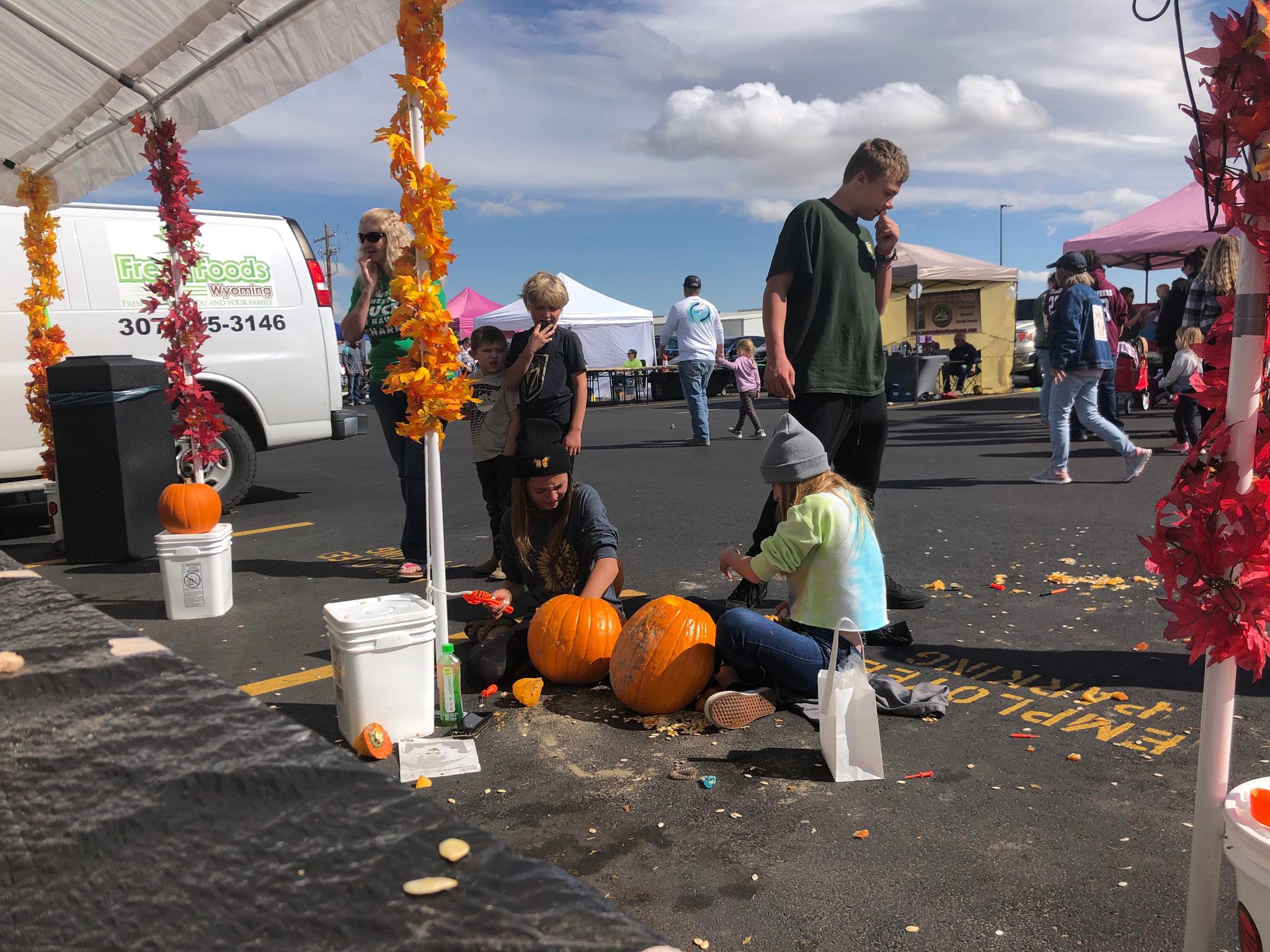 Attendees at the second annual Pumpkin Fest carve a pair of pumpkins. The event was a fundraiser for local nonprofit Mimi's House. (Tommy Culkin/Oil City News)

EVANSVILLE, Wyo. — The leaves are changing color, temperatures are dropping and Halloween decorations are beginning to crop up — all signs that fall is here. Another telltale sign is today’s Pumpkin Fest, which saw local residents turn out in droves to enjoy some seasonal fun while supporting local nonprofit Mimi’s House.

“The turnout has been terrific,” Mimi’s House board secretary Chynna Dobson said. “It’s definitely surpassed our expectations. We actually had so many people show up that we ran out of pumpkins fairly quickly and had to run to shuffle more in.”

In addition to a station for pumpkin carving and painting, several local vendors and artists had set up shop at the festival to help put attendees in a festive mood.

“There’s a whole lot of different vendors here today,” Dobson said with a smile. “We’re grateful to all of them for coming out and taking part in this.”

Among the attendees was Chris Brackenrich, who said he enjoyed the activities for the children.

“It’s been great today,” he said. “I think it’s great what [Mimi’s House does] for the kiddos, and they’ve got a lot of good things going on here today.”

For Brackenrich’s 8-year-old daughter Lennon, it was difficult to choose which attraction was her favorite, though she ultimately said the best part of the day was the local artist who weaved tinsel into her hair.

Ray Shaefer, who only recently moved to Wyoming from Texas, said the festival was a wonderful introduction to the local community.

“It’s a quaint little farmers market,” Shaefer said. “I was driving, saw it from the road and decided to check it out, and I’m glad I did.”

Mimi’s House is a shelter that houses homeless teenagers while imparting strategies and life skills to help them transition successfully into adulthood. To facilitate a family environment, the nonprofit also holds activities such as family dinners, game nights and holiday celebrations.

Shaefer said that when he found out what the event was benefiting, he appreciated it even more.

“Anything that helps children, I’m all about that,” he said.

Though the total amount raised hasn’t been calculated, Dobson said she was grateful for the turnout. The money will go toward some necessary strategic planning as Mimi’s House restructures some of its programs.

“We’re going to do some real hardcore strategic planning so that we can be sure that we’re serving the community as best we can.”