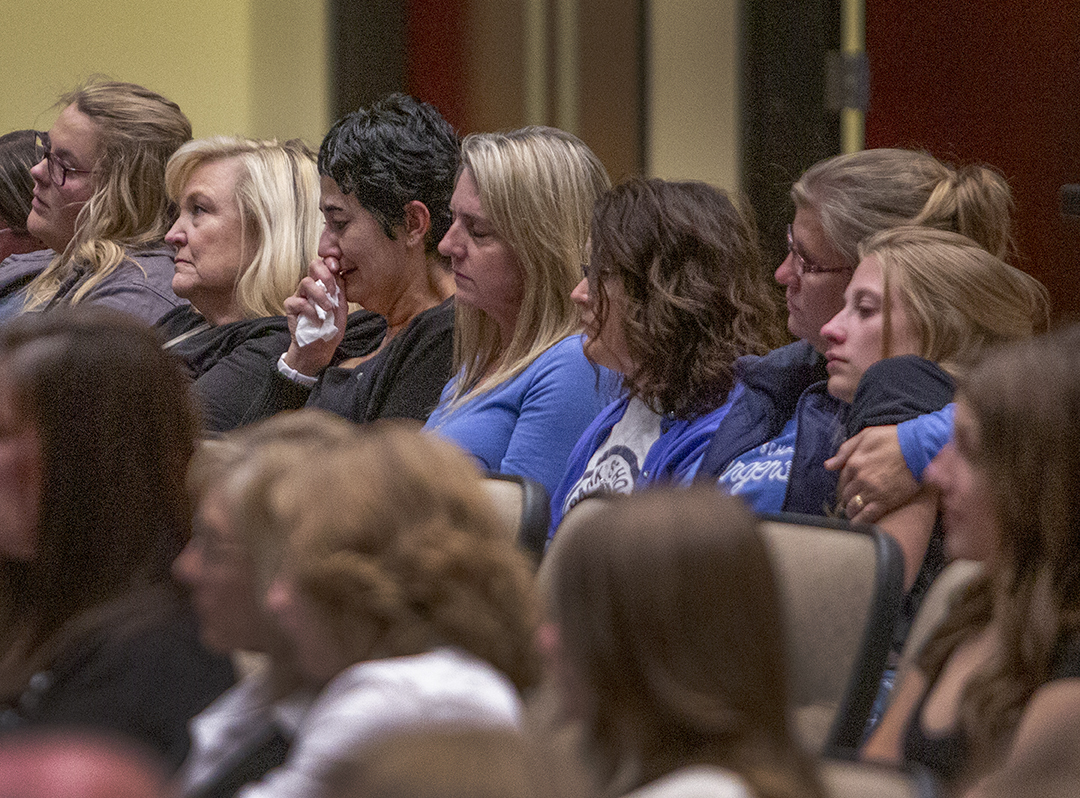 There’d be almost no noise if it weren’t for the music, except for the near-constant sounds of quiet crying before the start of a memorial service for Mauro and Mateo Diaz.

Mauro, a science teacher at Natrona County High School, and his 8-year-old son, Mateo, died on Sept. 24, when their car was hit head-on while traveling to Thermopolis to watch Mauro’s older sons in a cross-country race. Mauro’s wife and Mateo’s mother, Angela, survived the crash. She walked into the service flanked and assisted by their older sons, Jack, 18, and Diego, 16, who sat with family and close friends at the front of the auditorium.

Guest speakers recall Mauro as quiet, thoughtful and loyal. Born in northern Mexico, Mauro spent his childhood in New Mexico before earning an English degree. He eventually moved to Laramie, earned a degree in Biology at UW and soon started a career teaching science. After a teaching fellowship in the Bronx, he moved to Casper in 2005 to teach science at Dean Morgan Junior High School.

“Everyone who crossed paths with Mauro would agree there are not enough words that can describe what a sincere, genuine person he really was,” said longtime friend Ryan Radden.

“His childhood taught him the value of making meaningful relationships,” said Radden. “He was always a good listener, always trying to understand where people are coming from, and the soft-spoken words and quiet laugh put anyone at ease.”

Two former college roommates described Mauro’s first winter in Laramie, when he got his car stuck in snow and sat in their apartment bundled in layers of winter clothing. He soon acclimated to the conditions, and ended up spending countless hours enjoying the state’s natural resources during long backpacking hikes and fly-fishing trips.

Friends said his love of learning and the outdoors was passed onto the three sons he had with Angela.

As Mateo’s ice hockey sticks in a flower arrangement graced the stage, the Park Elementary School third grader was described as energetic, bright, and constantly smiling.

“Mateo was fun, and such an energetic boy,” said Mauro’s close friend and brother-in-law Ben Gruner. “He constantly made me laugh, and brought so much light into any room he was in.”

“One of the greatest gifts he always shared with us was his joyful imagination,” he said.

Notes from Mateo’s classmates and teachers were read on stage. One mentioned the huge stuffed toy snake he proudly showed off one day; another mentioned the fun they had playing soccer and coloring. A teacher wrote of Mateo’s excitement over starting the Harry Potter book series, and looking forward to eventually watching the movies.

“People may leave our lives, but take comfort in the moments that we have shared with them, that ultimately become a part of us that we can carry forever,” said Gruner.

Midway through the service, a slideshow with photos and short video clips played, encapsulating two lives in mere minutes: photos of family gatherings, Mauro surrounded by nature during hikes, and Mateo playing with friends and cousins and enthusiastically competing in Track Day events. It ended with a video clip of Mateo playing a short tune on a vintage piano.

He looked up and proudly smiled at the camera as the video faded to black.