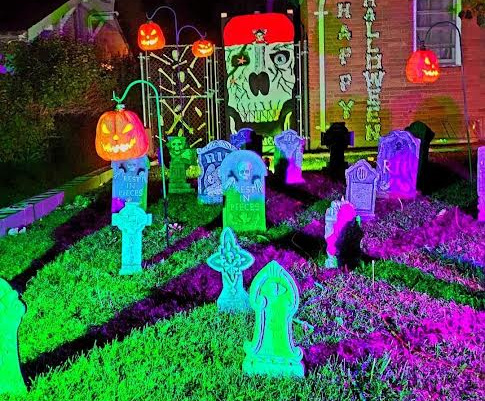 Tricia Provence has always loved decorating for Halloween, but now she's begun building some of her own decorations after taking up styrofoam sculpting. (Submitted Photo)

CASPER, Wyo. — Tricia Provence has always had a liking for skeletons, ghosts and all things spooky. For her, Halloween has long been a time to go all out in decorating. However, this year she isn’t just decorating her home and yard — she’s making many of the decorations herself.

She found out about the joys of sculpting with Styrofoam on YouTube roughly four or five months ago, decided to give it a try, and the rest was history.

“I get these big pieces of Styrofoam and I have specialized Styrofoam-cutting tools, then I get a specialized paint and weathercoat everything,” Provence said. “It’s a learning process, and I definitely mess up. I’ve gone back and done a few things two or three times.”

As she’s continued to work at it, though, Provence said she’s seen the results of her dedication pay off, and as she continues, the complexity of her pieces has increased while the number of mistakes has diminished.

“I’m more critical of my work than anybody else, because I can look at it and see all these tiny little imperfections that annoy me,” she said. “I’ve definitely seen myself improve as I’ve done it more and more, though. And YouTube is your best friend; going and watching others really helps.”

She started off by building a large skull, and has since built a spooky well and a jail cell inhabited by skeletons. The jail cell is the most intricate piece Provence has created thus far, she said, and people can actually enter it. All of her pieces have a pirate theme to them, which Provence said is one of her favorite Halloween tropes.

As far as building decorations for other holidays is concerned, however, Provence said she currently doesn’t have much inclination.

“I’ve always had a thing for Halloween,” she said with a laugh. “All year round I’m into Halloween. I’m from a small town where Halloween was a big thing. And then I came to Casper, where not a lot of people do it.”

Despite this, Provence said she’s seen her Halloween spirit rubbing off on others, including groups of schoolchildren who often stop to admire her handiwork.

“It’s really just so much fun,” she said with a smile.