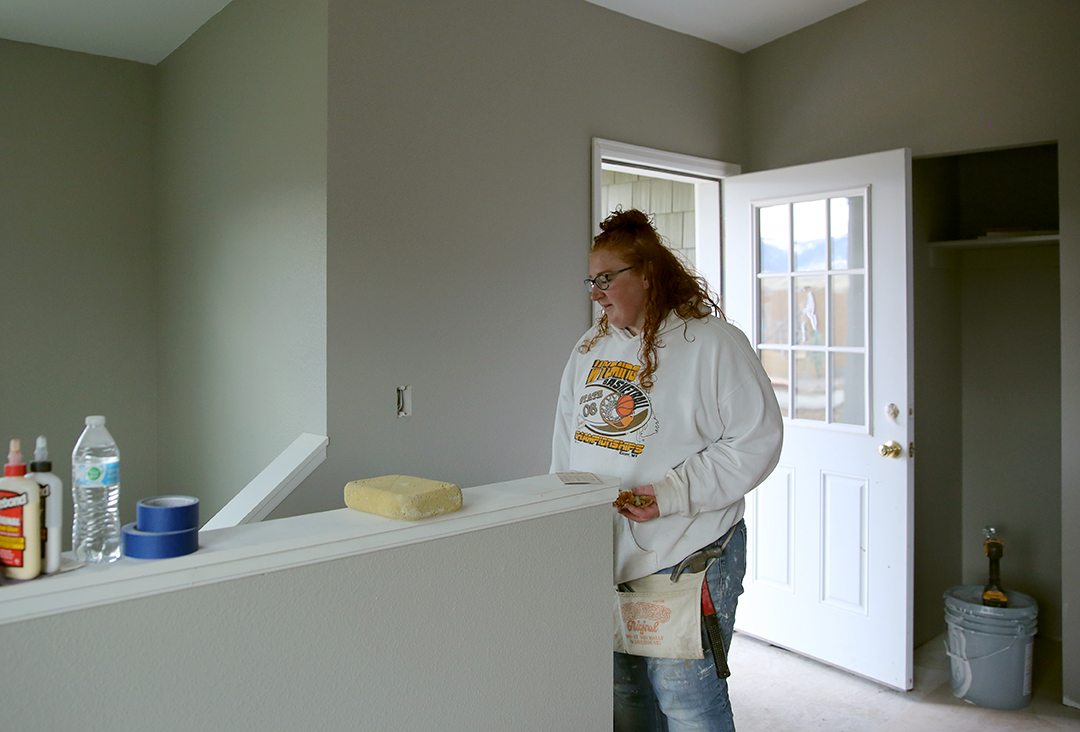 Samantha Moravetz stands in her nearly-completed Habitat home at Harris Crossing on May 3, 2022. She and her son will move into the home this weekend. (Dan Cepeda, Oil City News)

CASPER, Wyo. — Casper resident Samantha Moravetz was drowning in medical debt several years ago and living in an assisted housing apartment when she decided to apply for a Habitat for Humanity home.

After working hard to pay off debt, she was finally accepted in 2020. This Friday, after two years and some 250 hours of sweat equity, she and her 9-year-old son will move into their new home in Harris Crossing.

“I’m super stressed because buying a house is stressful, but I’m super excited,” she said. “It’s my first house that I’ve ever purchased.”

With the completion of Samantha’s house, Habitat for Humanity Heart of Wyoming’s subdivision called Harris Crossing will be nearly complete. Two more houses are under construction on the cul-de-sac on the 1700 block of Shumway Avenue, just west of Beverly Street, making a total of 13 houses in the subdivision that started in 2017. A ribbon-cutting ceremony is scheduled for Wednesday, Nov. 2 at 5 p.m. to mark the occasion.

“Samantha will be able to provide safe, affordable housing for her family and become the organization’s 45th homeowner in Natrona County,” said Executive Director Tess Mittelstadt in an email.

There are more than 1,100 Habitat for Humanity affiliates in the nation, said Tess in an earlier interview, and Wyoming’s is its own nonprofit. “I think it’s very, very important that people understand we’ve been able to build the Harris Crossing subdivision because of funding we’ve received from Natrona County,” she said.

Harris Crossing is the first entirely new subdivision built by Habitat for Humanity The Heart of Wyoming.

Habitat homes were typically built on “infill” plots, sometimes with older homes that were moved onto the plot of available land. “That had more to do with access to property,” Tess said. “Prior to 2017, my predecessor had had this kind of vision of what we could do if we didn’t have one lot, but we had many lots in the same location.”

Samantha’s split-level rancher-style home was designed and built around her needs, she said.

“I’m so in love with this house,” she said. “Every step of the way, it’s been such an amazing process, getting to choose the colors, cabinets, countertops and the flooring.”

Every Habitat for Humanity recipient is required to put in at least 150 hours of work on a project, whether it’s their house or not. Construction manager Shawn Martz leads the builds, and experienced volunteers make up the rest of the construction teams. Major work such as plumbing and electrical is contracted out to licensed professionals.

Samantha expects a very busy weekend of moving, and then will get into the process of settling in and making a home out of the new house.