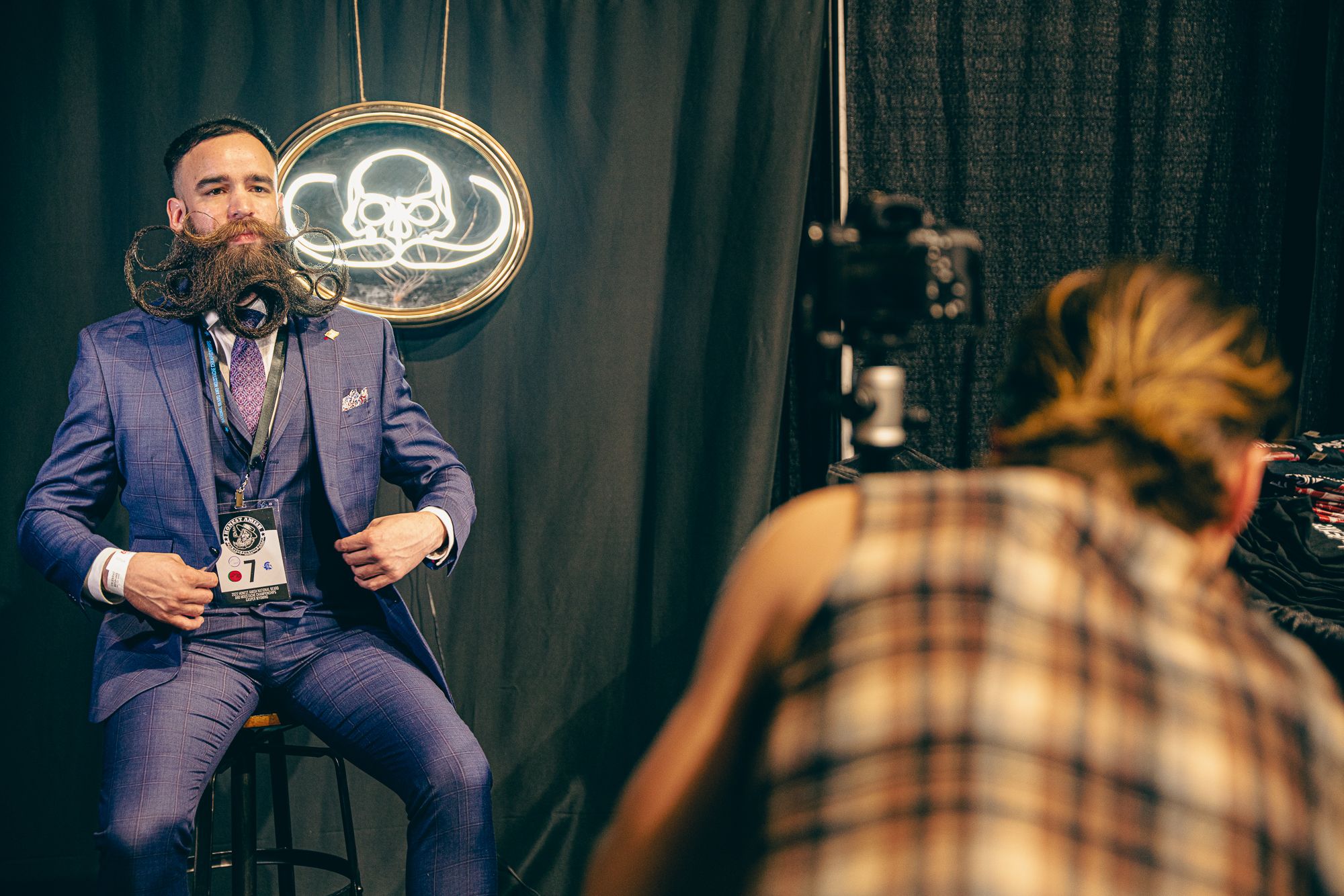 A competitor shows off his beard at the Beard and Moustache National Championships. (Jake Hoffman, Special to Oil City News)

CASPER, Wyo. — On Saturday, the Ford Wyoming Center was home to food, drinks and lots of expertly maintained facial hair as part of the 2022 Honest Amish National Beard and Moustache Competition.

The competition, which was hosted in conjunction with the annual Booze and Bacon Festival, brought competitors from across the country, from Florida to Alaska. In total, more than 200 competitors took to the stage to show off their facial hair.

“This is the only national championship like this so it draws people from all over,” said Beard Team USA creative director Bryan Nelson. “It was really big and gaining momentum, and then it took a hit when COVID struck, but we’re getting back to where we were. This turnout is a lot better than last year’s. … This is a good sign that things are picking back up.”

Though the turnout doesn’t quite match numbers the competition was seeing before the pandemic, Nelson said it’s a positive sign and he’s hopeful they’ll return to pre-COVID numbers soon.

Competitor Ron Wolek was taking part in his first-ever national championship, but he was far from an amateur in the world of professional facial hair. Wolek has made wigs and worked as a hairstylist on several films.

“I worked with Ed Asner on his last movie and I also got to make hair pieces for the Creepshow Holiday Special, which was a lot of fun,” Wolek said.

Looking back at his first time competing, Wolek said he was happy with his showing but knows he could’ve done better.

“I was competing in the ‘Bigfoot’ classification, so I thought the idea was to have it kind of wild,” he said with a chuckle. “But then I ended up losing to some guys with really well-maintained beards.”

Still, he said he loved the camaraderie in the competitive facial hair community and plans on attending several more competitions in the future.

Competitors were split into one of more than a dozen categories depending on their style of facial hair, and each came with its own set of standards and rules.

“Depending on what they’re competing in, it’s totally different,” Nelson said. “In some categories you have to style it, in others you’re not allowed to — it all varies.”

Taking first place in the Groomed Moustache category was Levi Harris from Woodland Park, Colorado. The victory was a milestone for Harris, who was runner-up in last year’s championship.

“It feels awesome,” he said with a grin. “My wife, my daughter and my son were all in the audience and to be able to stand there on the stage and represent Colorado and [personal business Death Grip Mustache Wax] was amazing.”

“Any time your kid succeeds, you’re happy. Plus, I helped make him so I get to take some credit in his win,” he said with a laugh.

Second-place finisher Joshua Quinney, who had already won the top prize twice in the past, said judges aren’t just looking at the contestants’ facial hair when making a decision.

“Me and [Levi Harris] almost tied, and I think it ultimately just came down to his stage presence,” Quinney said.

Quinney said that competing in the Groomed Moustache division is no easy feat, and careful styling with wax is imperative to having a top-level moustache.

Each year, the Honest Amish National Beard and Moustache Competition donates a percentage of its proceeds to charity, and this year the organization chose Project Kenny and the Unaccompanied Student Initiative. Project Kenny provides support to military veterans and service members using canines and other therapeutic techniques. The Unaccompanied Student Initiative provides safe, stable housing and develops support systems for youth experiencing homelessness.

“It’s not just great people and a great time, but for a great cause too,” competitor Joel Neubert said.