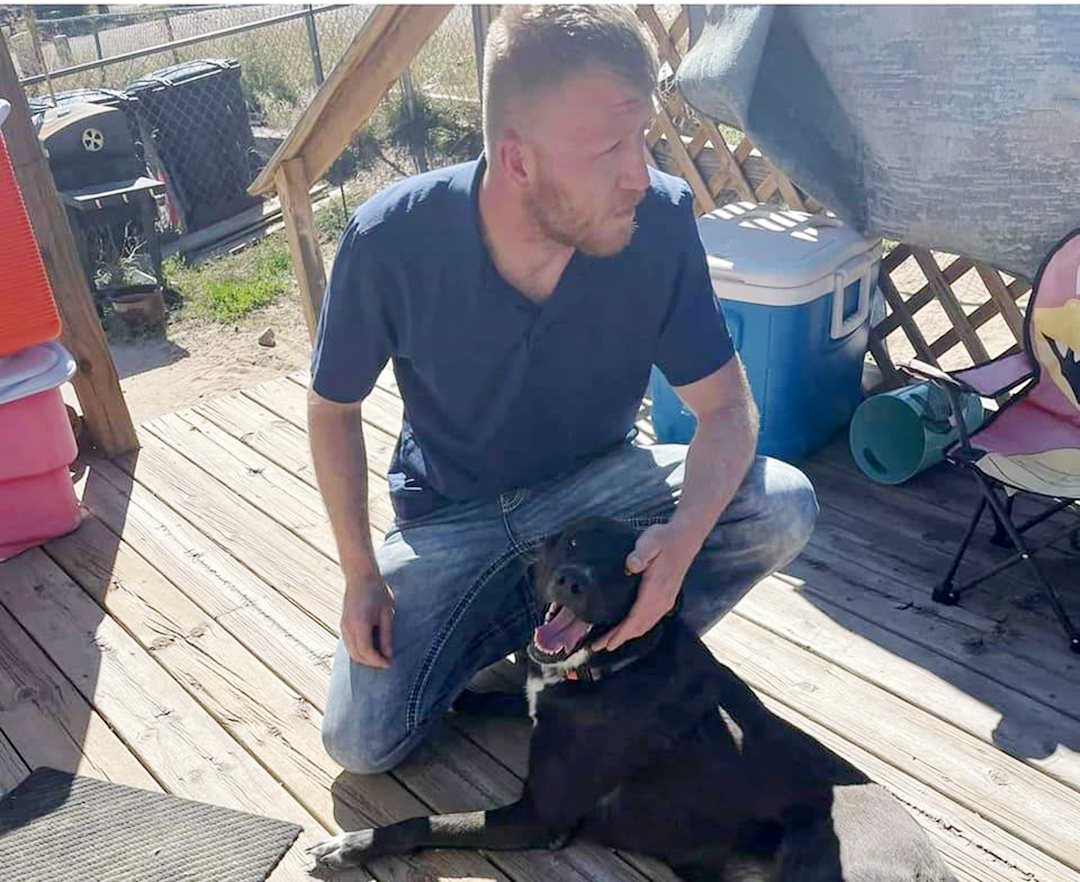 Vincent O'Connell works with a client's dog recently in Casper. O'Connell started the Absolute Alpha dog training business, using skills he learned with military animals during his service in the Navy. (Courtesy via Facebook)

CASPER, Wyo. — Navy veteran and Casper resident Vincent O’Connell can talk all day about the glories of dogs.

“They bond much better than humans do,” he said in a recent phone interview. “They’re always honest, always dependable, always reliable, and their body language is amazing. It’s easy to communicate with them, and they communicate exactly what they want.”

“We just need to learn how to read that,” he added, emphasizing an essential component to a recent life detour.

Mere weeks ago, Vincent was making a comfortable living selling cars at one of Casper’s dealerships. After watching someone in his neighborhood struggle with an unruly pet, he took to social media and offered up the dog handling and training expertise that he learned working in a military K-9 unit to anyone who was interested.

“I decided that I was gonna put a Facebook ad out there,” he said, “and that Facebook ad blew up.”

Confronted with the choice of spending his days with inanimate vehicles or dogs, he naturally chose the latter. Soon, he had resigned his sales job and set up Absolute Alpha, a full-time one-on-one dog training service specializing in particular with unruly and aggressive dogs.

“What I’ve realized is people don’t spend a lot of time with their dogs,” he said. “They get a dog, they go to work and come back and sit on the couch. That’s not the kind of relationship that I see with a dog. They’re family members, and we should be giving them attention.”

“It’s a living being, it’s a living creature that loves you and needs your time,” he said.

He firmly believes that too many so-called aggressive dogs are condemned or sent to shelters for no good reason. Nervous or aggressive dogs often feel unloved and unsafe, he said.

“Most dogs that are aggressive like that, they’re always on alert, they’re scared of their environment,” he added. “It’s almost like PTSD with dogs; if you show them that, ‘Hey, this is the behavior we don’t want, but we won’t hurt you and you’re safe,’ it’s remarkable how well that works.”

“I believe in positive reinforcement,” he continued. “We need to wean them off treats, and we need to show them that they’re loved and cared for, and can depend on us for safety so they don’t have to provide that safety themselves. They don’t have to be scared of their environment.”

Vincent also believes in the adage that training dog owners is as important as training dogs.

“People don’t want to put in the effort,” he said. “I challenge you to bond with a dog for just 30 minutes a day — it doesn’t even have to be training, just bonding — and it’ll be eye-opening.”

To prove his point, Vincent is holding a free dog training demonstration on Saturday, Dec. 3, from noon to 3 p.m. at Sage Park, 2930 E. 15th St. He encourages people to bring difficult pets.

“What I expect to see is dogs pulling on their leash, and I’m going to show you the correction to what’s going on and show you why this is going on,” he said, “and how you continue to correct it and continually build that bond.”

“The things that dogs realize that humans don’t is astounding,” he said. “They have amazing noses, and they can feel our emotions.

“Once they realize what you want and they can depend on you, you can train them to do anything.”

To inquire about dog training sessions, visit Absolute Alpha’s Facebook page or visit their website. Vincent is also available by phone at 307-337-5224.