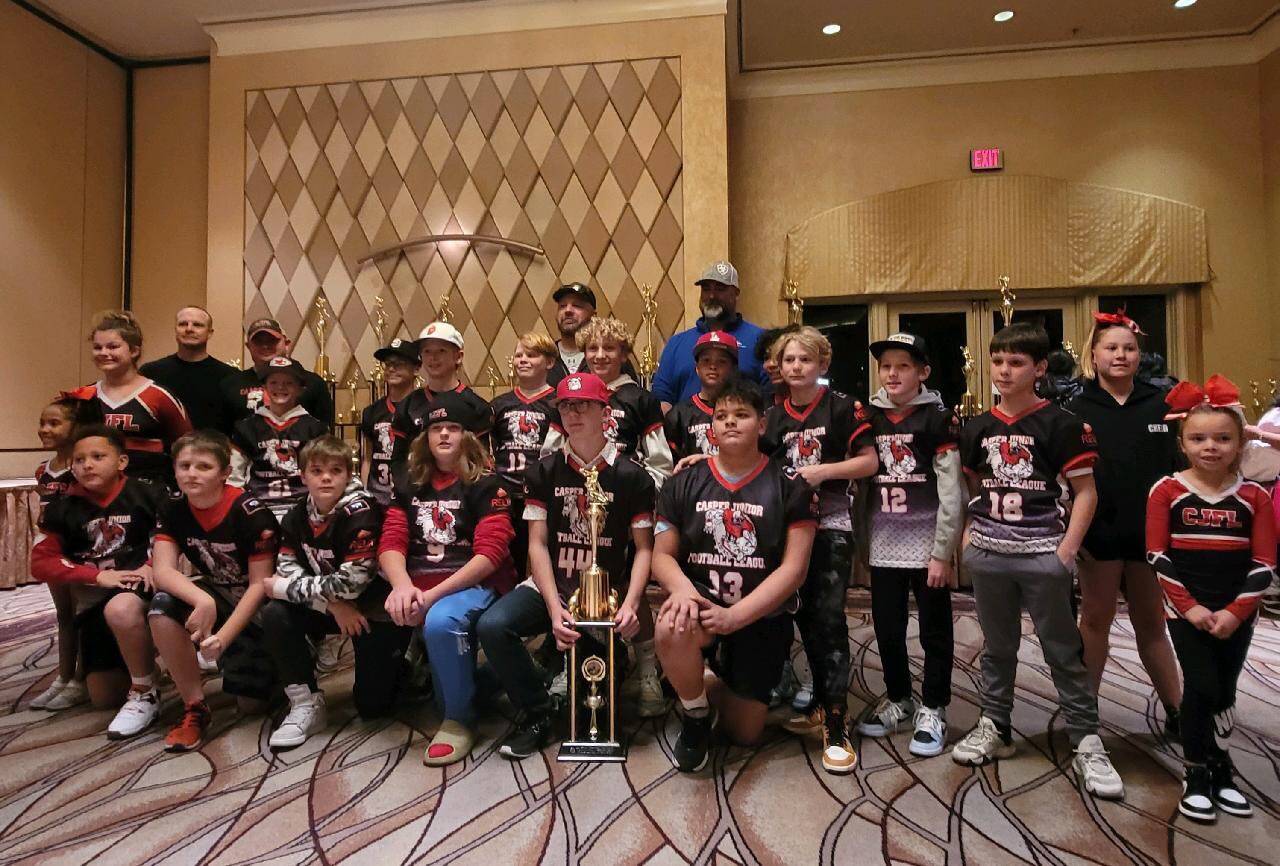 Members of the Casper 11U team pose following a successful showing at the national championship tournament in Las Vegas. (Submitted Photo)

CASPER, Wyo. — After a successful season, the Casper Junior Football League 11U team traveled to Las Vegas to test itself against competition from across the nation. And what the team discovered is that it can not only hold its own on the biggest stage, but also shine. Ultimately, it finished as runner-up in its division at the national tournament.

The league, now in its 10th year, has grown in popularity over time and now includes 460 children across three football divisions and cheerleading squads ranging from first to sixth grade.

This year, the senior division shone in games throughout the state, including tournaments in Green River and Laramie.

“We only lost one game [in the Gillette Tournament], and it was to Gillette — maybe the best team in the league,” head coach Jeremy Taylor said. “We lost a really close game 6–0, and that was probably the closest game [Gillette] played all year.”

Taylor found out about the National Youth Football Championship in Las Vegas from a Rock Springs coach earlier in the season. He said the decision to take part was a no-brainer.

“It was a ton of fun and such a great experience for everybody involved,” he said. “Most of the kids had never been, and the families that came all had an awesome time, too.”

While the players and their families made sure to enjoy the sights and sounds of the big city, they also remembered why they’d come. When it came time to play, the team was more than ready.

In a four-team division, Casper’s first opponent was a formidable one: a California-based team that was the prior year’s 10U national champion.

Not intimidated in the slightest, the Casper boys jumped on their opponents early and never looked back. A balanced rushing attack, coupled with some stifling defense, gave the Californian team fits all game long.

“It was a total team effort,” Taylor said. “Everyone contributed to the win, on both sides of the ball.”

The head coach added that the team’s competition in Wyoming helped prepare it for the big stage.

“In our games here in Wyoming, we spent a lot of the year playing up, because we’re a team of fifth and sixth graders and many of the teams we played were just sixth graders,” he said. “Because of that, I think we were really prepared when it came time to play a team our own size.”

Taylor also thanked the families and fans that made the trek down to watch the team play.

“I think we might’ve had the biggest fanbase of any team there, and we took nine cheerleaders down too and they did great too,” he said. “I think that really did make a difference.”

In the team’s next game, it ultimately came up short against a Colorado-based team that Taylor said was the best they’d faced all year. Still, he said nothing changes how proud he was of his squad.

“This was a team of sixth graders that’d all been playing together since second grade, and they were like a well-oiled machine,” he said. “Still, our guys never gave up. They never stopped fighting.

“What this trip showed me is that we can go to these big events and not just hold our own, but actually do really well. … It makes me want to go back in future years.”

And while Taylor said he loved what he saw from his team on the gridiron, what he saw off the field also warmed his heart.

“After the games, they were making friends with these kids from all over the country, talking to them and getting to know them and just having a good time together,” the coach said.

Registration for the next season will open up online shortly after the start of the new year, and Taylor said those interested in joining can look for updates on when exactly that will be at the Casper Junior Football League’s Facebook page or at the league’s website here.

“Our kids are amazing. They’re great kids with awesome attitudes, and they all come from great families, which makes such a difference,” Taylor said. “I’m already looking forward to next year.”