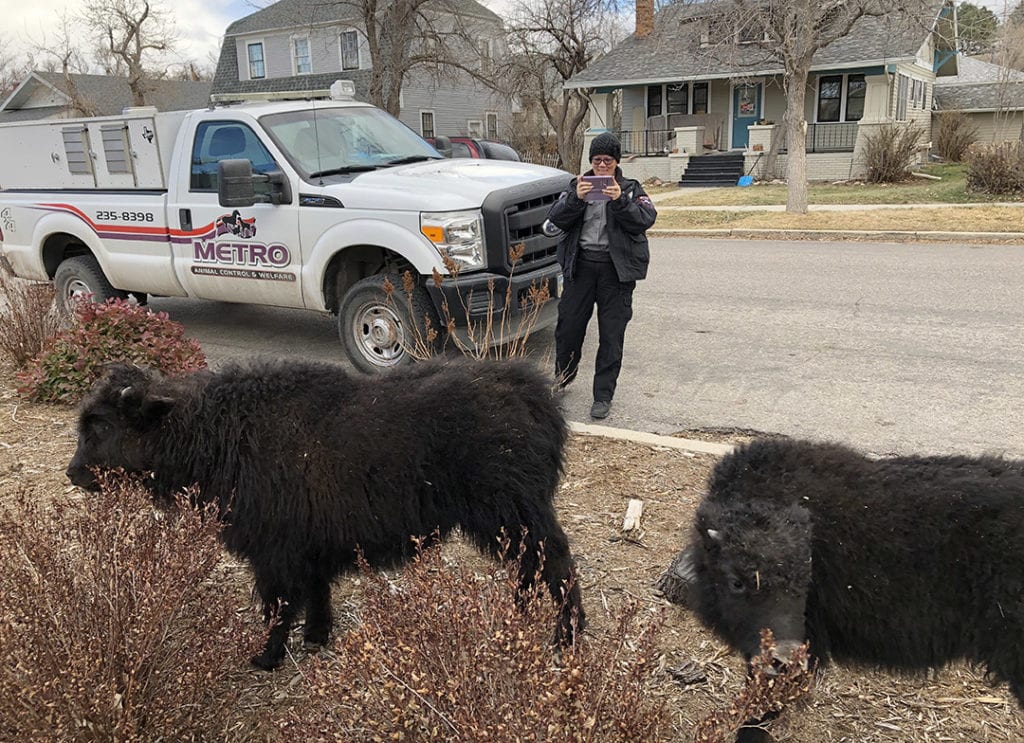 Dec. 20 update: The overwhelming consensus from commenters on our Facebook post says that these “tiny cows” are indeed yaks. They were reunited with their owners yesterday afternoon. Our original post follows below:

On second glance they looked nothing like dogs. Maybe cows, maybe even buffalo. But small.

Those were the thoughts of several people as they passed along Grant Avenue in central Casper on Wednesday afternoon as two black mini bovines of an unknown breed calmly nibbled on fallen leaves and bushes.

“I was sitting in the kitchen and I looked out the window,” said Paige Reeb, 14, who was home with a friend when they noticed the unusual bovines. She promptly called 911.

One of the animals seemed to be a calf following its mom, but no one in the area could really say for sure.

“We got the call and I was like, ‘really,'” said Metro Animal Control officer Tiffany Hyde. “We didn’t believe it, we figured we’d show up for two big dogs.”

Hyde was soon a believer.

“I’ve never seen anything like this,” said Hyde, who’s worked at Metro for 15-years. When asked the animals’ breed, Hyde came up empty. “I got nothin’,” she said.

Livestock aren’t allowed within city limits, and no one who stopped and looked at the animals had ever seen them in the area.

The two mini creatures aren’t tagged or branded. Most unclaimed livestock captured by Metro are usually taken to a livestock auction barn out of town.

Since these animals are clearly domesticated, Hyde said she wasn’t sure what they’d ultimately do with them. At least one passerby who lives on a ranch out of town offered to adopt them if their owners didn’t come forward. The Humane Society also offered to assist.

For the time being, they will be housed at Metro until their owners come forward.