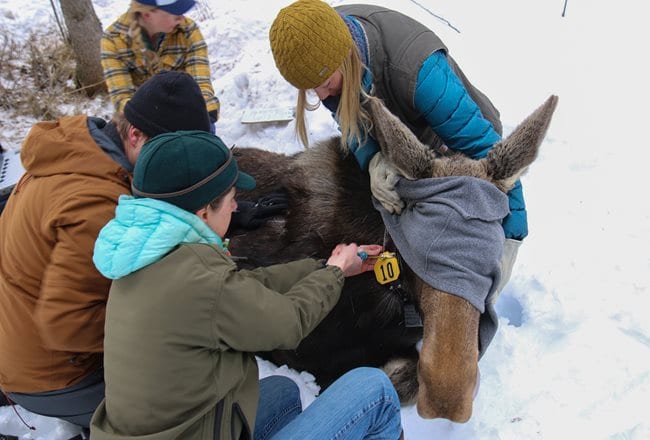 CASPER, Wyo. — The Wyoming Game and Fish Department said on Monday, April 20 that five additional cow moose have been fitted with GPS satellite tracking collars to bolster a study looking at how moose interact with Wyoming Highway 22 between Jackson and Wilson.

“The Wyoming Game and Fish Department and Wyoming Department of Transportation initiated the study in 2019 to learn more about when, where, and how often moose cross roads, which will in turn inform where wildlife crossings would best be located in the upcoming highway reconstruction project planned for 2022,” Game and Fish said.

“Unfortunately, one of those moose died of unknown causes,” Game and Fish added. “It is known that it was not from a vehicle collision as collar data showed it had never crossed a roadway.”

“Currently, there is a total of 14 collared moose being tracked in this area. The collars are programmed to record the location of the moose every 30 minutes for approximately 2.5 years when they will automatically detach and be recovered. While on, the collars upload GPS locations every two days to a satellite, which then sends the locations to an email account where they can be downloaded. This technology provides real-time data on moose movements and notification of possible mortalities.”

The moose tracking study is the first of its kind in the area, according to Game and Fish who add that “a lot is being learned.”

“For instance, in the first year, four of the 10 moose collared last winter were migratory, meaning they moved from their low elevation winter ranges where they were collared to high elevation summer ranges,” the release states. “One of these collared moose spent the summer some 20 miles north in Grand Teton National Park, in Open Canyon and Death Canyon. The other migratory moose spent the summer in the Phillips Canyon and Teton Pass areas.”

Six of the intial ten moose who were collared are considered “resident.” Game and Fish explains that these moose use the same areas in summer and winter.

“The resident moose primarily spent the summer on West Gros Ventre Butte, the Wilson area and along the Snake River, Fish Creek and Fall Creek,” the release states.

Moose vary in terms of how often they tend to cross roads.

Additional funding for the study this year will allow researchers to look at how winter ticks impact moose. The study will also begin to look at other health-related information such as “blood mineral levels, body condition and pregnancy,” according to Game and Fish.

“This work is ongoing and results will be available in the future,” the release adds. “The Game and Fish would like to sincerely thank all of the private landowners who allowed access to their property to dart and collar moose.”