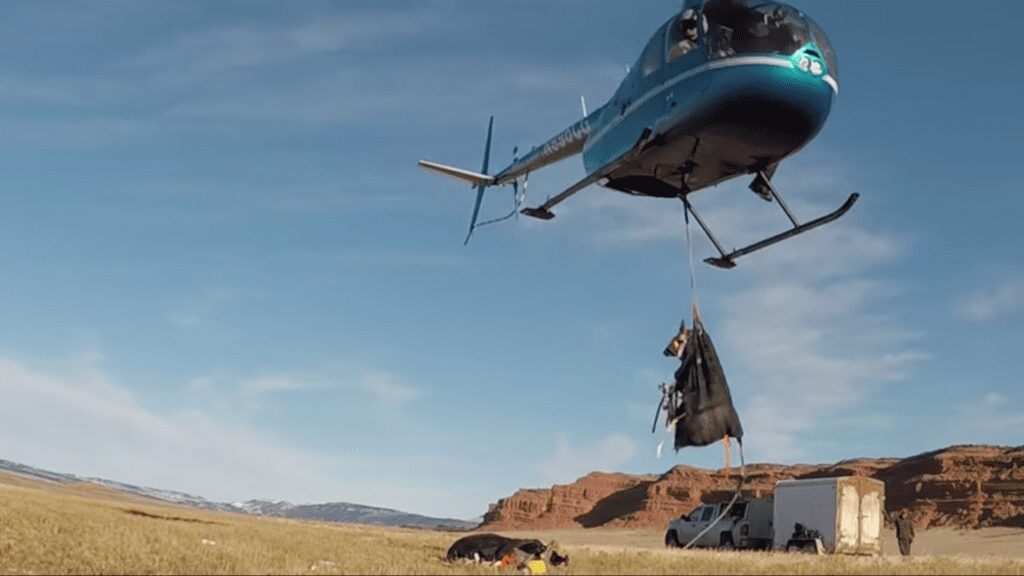 A helicopter transports a captured mule deer during a capture operation near Kaycee in 2019. (Screenshot from Wyoming Game & Fish Department video posted to Youtube)

CASPER, Wyo. — The Wyoming Game & Fish Department said on Thursday that a mule deer capture to study the movements of the deer in the northern Bighorn Mountains will begin on Aug. 1.

“The deer will be captured by a professional capture crew using helicopter net guns as well as by Game and Fish personnel on the ground using immobilization techniques,” the department said.

The captured adult doe mule deer will be fitted with radio collars to track their movements.

“The goals of the study are to identify mule deer seasonal range and habitat use and document fawn production and three-to-six month fawn survival rates,” Game & Fish add.

25 does were captured and fitted with radio collars by a professional wildlife capture crew on March 5, the department adds. Those deer were captured on winter range on both the eastern and western foothills of the Bighorns.

“The captures in August will target does on high-elevation summer range,” Game & Fish add. “The GPS collars will record the position of each animal every two hours for the next three years, before automatically releasing from the animal. Once-daily position updates will be available to biologists throughout the study, while the finer-scale, two-hour movements will be stored onboard the collar and retrieved at the end of the study.”

“If an animal dies during the study, a mortality signal will be sent to the local wildlife biologist who will search for the animal’s carcass, determine the cause of death and collect biological samples.”

Three of the 25 deer captured in March have died, including two due to malnutrition, according to Sheridan Wildlife Biologist Tim Thomas.

“The deer were in poor body condition with little fat reserves and were found after a spring snowstorm,” Thomas said in the Game & Fish release. “The third mortality was the result of mountain lion predation. The collars were retrieved from each animal and will be redeployed in August.”

The Wyoming Game & Fish Department have shared video of a Kaycee mule deer capture which also used helicopters in 2019 to their Youtube channel:

Game & Fish is collaborating with the following agencies for the project:

“The project has received generous financial support from the Knobloch Family Foundation, the Mule Deer Foundation, The Nature Conservancy, Sheridan Community Land Trust, the Wyoming Game and Fish Department, the Wyoming Wildlife and Natural Resource Trust, the Department of the Interior Secretarial Order 3362 and the Cody Chapter of Muley Fanatics,” Game and Fish add.