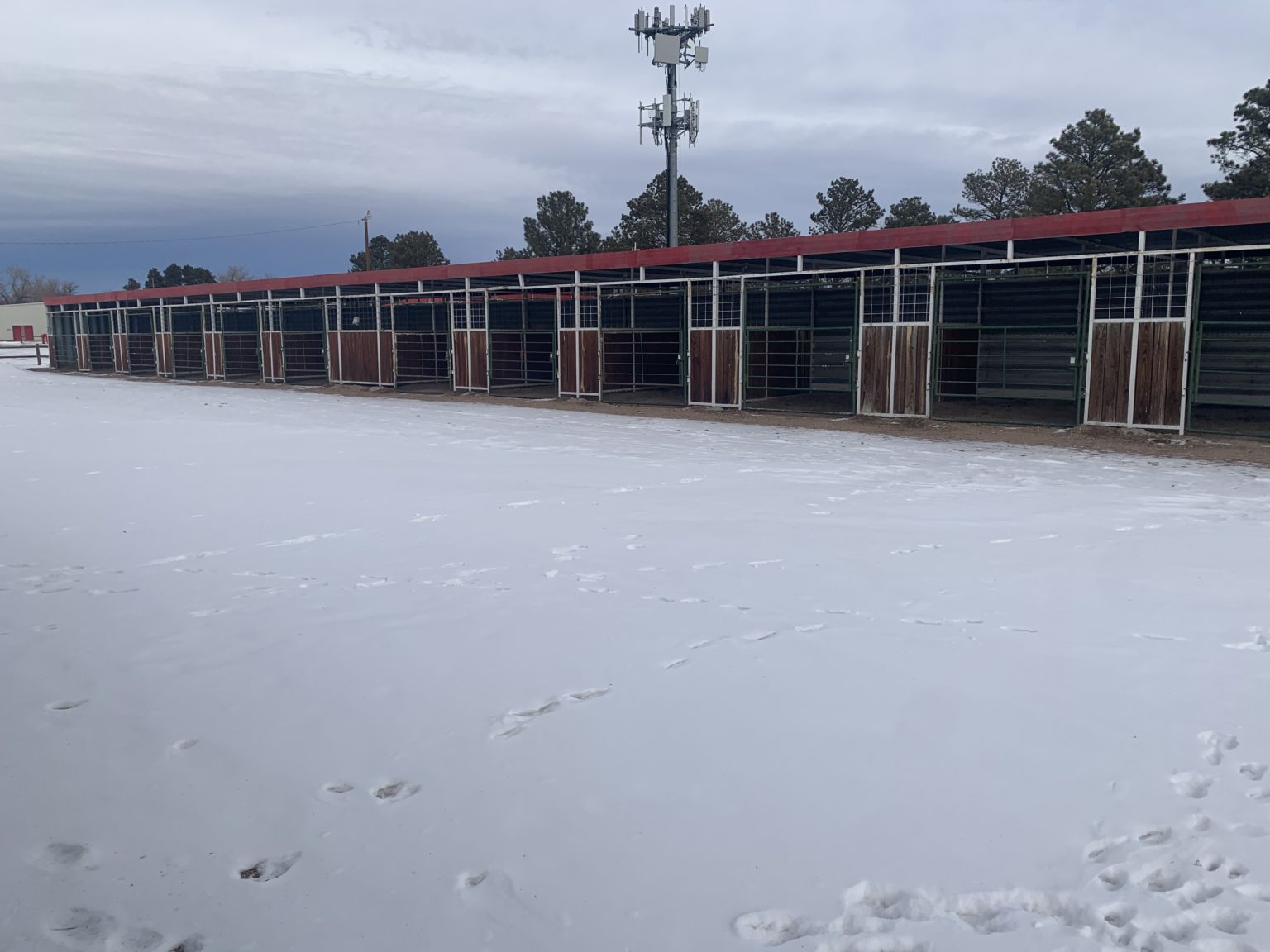 Empty animal pens sit in the snow Monday at Frontier Park in Cheyenne. Cheyenne Frontier Days has offered pen space to those who have displaced livestock as a result of the Marshall Fire over the past week that has affected portions of Colorado. (Briar Napier/Cap City News)

CHEYENNE, Wyo. — The total toll of Marshall Fire that’s ravaged parts of Colorado over the past week may not be known for weeks.

But there’s another cost to the tragedy for some, one that creates its own set of logistical nightmares when natural disaster comes calling: animal life.

Much like many areas of Wyoming, the fire’s most-affected area of Boulder County, Colorado is a region filled with ranchers and farmers that make their living off of keeping and maintaining livestock. If that operation is severely altered — such as by a fire destroying a barn or ruining soil — it has an obvious and disastrous effect on some people’s livelihoods.

That’s where Cheyenne Frontier Days (CFD) stepped in to help their neighbors to the south, offering animal pen space beginning this past weekend to any farmer or rancher with displaced livestock as a result of the fires. CFD President and CEO Tom Hirsig said that no one had taken him up on the offer yet, but it still stands in case someone needs it.

“For us, it’s kind of a no-brainer,” Hirsig said. “We have all these empty pens. … When somebody is trying to find a place to put 200 heads of cattle, there’s not lots of opportunities or places to put them. There’s some fairground here and there [and] sale barns. But we just wanted to make that offer out there in case somebody’s house burnt down and they had some animals and they had friends that were living in Cheyenne that they could stay with.”

Hirsig said that at the moment, the CFD property could hold “a couple thousand” animals with ease. He noted that the CFD’s livestock board had heard there were some issues with livestock displacement in the affected areas, which resulted in a widely-shared post on the Cheyenne Frontier Days’ Facebook page.

In Boulder County’s latest update shared Saturday, officials wrote in a news release that the fire was 62% contained and spread over 6,200 acres. The Boulder Daily Camera reported the same day that nearly 1,000 homes have been destroyed, mainly in the towns of Superior and Louisville, while two people are missing and feared dead.

“People can always find refuge in the place to stay, but you know, animals sometimes get kind of left out,” Hirsig said. “Especially like in fires or places where they get displaced and nobody knows where they are, we care a lot about that.”

Louisville, for instance, is roughly 90 minutes south of Cheyenne, a drivable distance from home for someone suffering from livestock displacement. With so much space for animals left unused for large swaths of the year, it felt right for Cheyenne Frontier Days to act, Hirsig said.

“It’s just kind of natural when you have a bunch of pens sitting here and you know during the rodeo how many animals we can put in here,” Hirsig said. “[If] somebody really needed something, it should be available to them.”

Cheyenne Frontier Days has provided a phone number — 307-778-7263 — for any questions regarding space for displaced livestock due to the fire.