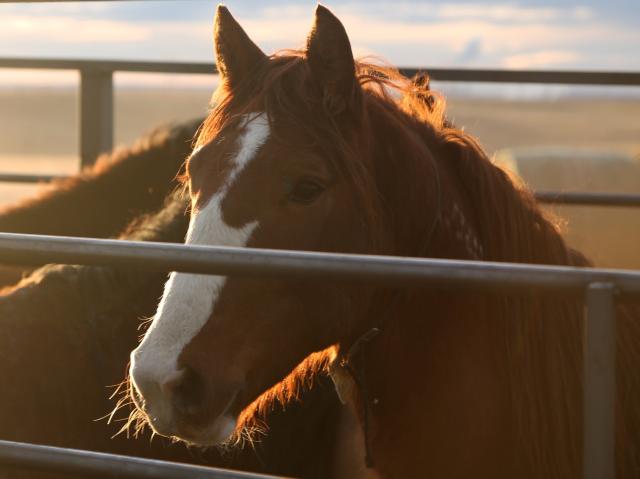 CASPER, Wyo. — 11 horses have died of Streptococcus equi, also called strangles or equine distemper, at the Wheatland Off-Range Corral that houses about 2,750 horses and burros, according to the Bureau of Land Management (BLM).

About half of the animals at the facility have shown signs of strangles and the BLM said in a press release Thursday that it is pausing wild horse and burro adoption events at the facility until further notice.

No foals have died as a result of strangles at the Wheatland facility, according to the BLM.

“Foaling mares and newborn foals have shown to be the least impacted by the infection,” the agency says. “Additionally, all of the mares at the facility have been vaccinated for strangles and their foals are born with some immunity.”

The BLM previously announced a temporary closure of the corral and postponed adoptions due to strangles affecting horses at the facility in March. No animals have been shipped from or received at the facility since the last load of wild horses gathered in fall 2021 were delivered in January 2022, according to the BLM.

“The BLM and a veterinarian continue to monitor and provide care for the animals and are evaluating when adoptions can resume,” Thursday’s press release states.

Strangles is a common infectious disease among equines and can be spread by horse-to-horse contact or through contact with people, tack, drinking troughs and other means, according to the BLM. The root cause of the outbreak at the Wheatland facility has not been identified.

Strangles has a typical mortality rate of 10%, but can be as high as 40%, according to the BLM. The 11 horses that have died at the Wheatland facility equal about 0.8% of the corral’s population.

Wild horse and burros are vaccinated against strangles, influenza, rhinopneumonitis, eastern and western encephalomyelitis, tetanus, West Nile virus, and rabies when processed into the BLM’s program. While the strangles vaccine can help decrease the severity of symptoms, it does not completely prevent the transmission of the disease, according to the BLM. All the animals at the Wheatland corral have received at least a first does of vaccines: “The first animals to arrive at the facility in 2021 are starting to receive boosters,” the BLM says.

Strangles symptoms can include the following, according to the BLM:

The animals at the Wheatland corral are being provided supplemental feed and additional lick tubs to help mitigate the loss of appetite. The BLM adds that medications for inflammation and pain are being administered when needed. The cancellation of adoptions aims to help reduce stress on the animals, according to the BLM.

The BLM is also bleaching equipment, alleyways and chutes and segregating animals that are showing strangles symptoms away from other animals.

“We look forward to holding adoptions again in Wheatland,” said High Plains District Manager Kevin Christensen. “However, our priority is the health of the animals at the facility. Adoption events will remain paused until the horses are fully recovered and we are confident that animals can be shipped without risk of transmission.”

Further information is available from the BLM.