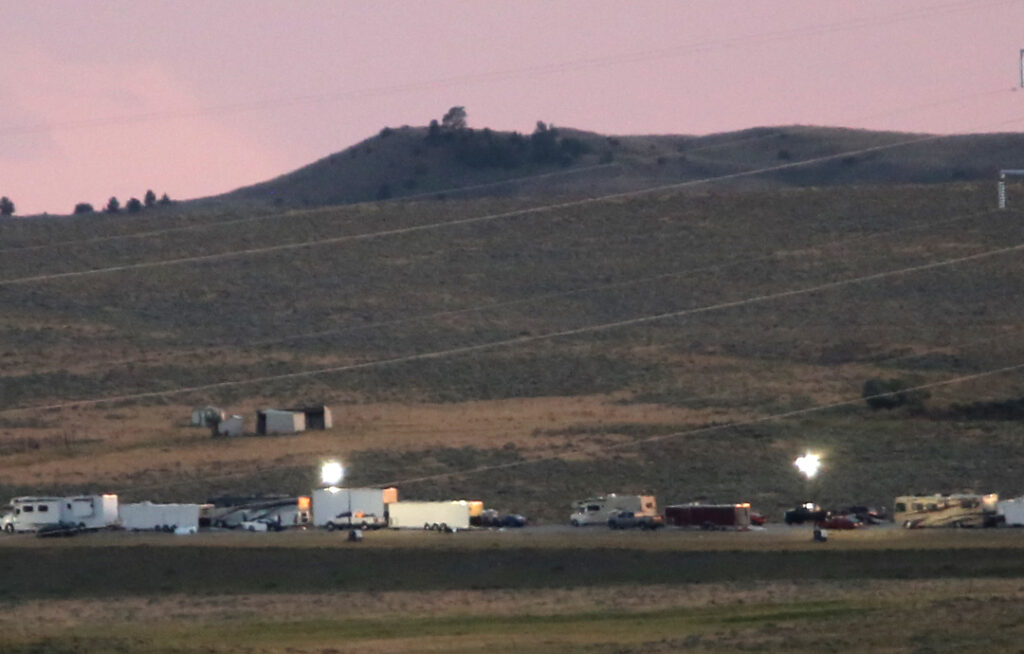 Numerous vehicles line a closed street near Mills on Tuesday, July 8. The area was being used to produce the Discovery series “Street Outlaws: Fastest in America.” (Dan Cepeda, Oil City)

CASPER, Wyo. – “Street Outlaws: Fastest in America” is a competition docu-reality series, but in many ways it’s a mystery.

The highly popular Discovery Channel series “Street Outlaws” has run for 15 seasons. The first season of its new “Fastest in America” spinoff premiered in January, and what appears to be season two is currently in production in Casper.

“Eight of the fastest teams in America fight for a winner-takes-all purse of $100,000 – the highest payout in street racing history,” according to a season one blurb at Discovery Channel.

According to Visit Casper CEO Brook Kaufman, the Wyoming Department of Transportation took the lead on helping facilitate the production in Casper.

“WYDOT is the lead agency on that project, and then the county signed a permit to allow for the street closure,” she said. “Visit Casper’s role was to help with lodging accommodations and connecting them with the fairgrounds for car and trailer storage, things that they needed off-site.”

Kaufman said she wasn’t sure how many crew and cast members were in town for the production and wouldn’t know until later how much of an economic impact the show’s production would bring into the area.

Kaufman said the production schedule runs from late June when crews started to arrive, to the final day of shooting on July 24. While the show flaunts the “outlaw racing” image, all racing scenes are done at night on closed roads with full cooperation from authorities.

WYDOT is closing WY 257 between Robertson Road and the WY 220 junction on production nights from around 4 p.m. to 7 a.m. the next morning.

On Tuesday night the area was closed and patrolled by a Mills Police vehicle. Several vehicles, including enclosed trailers, were seen on the road heading to what appears to be a well-lit staging area lined with motorhomes, trailers and other vehicles and equipment.

A person close to the show reached by Oil City News said they were unable to talk to media, due to the competition nature of the show and liability issues.

Some information has leaked out online, however.

Central Wyoming Motorsports in Douglas posted the names and vehicles of Team Wyoming on Facebook on Monday, and that the team would be racing Team Kentucky that night. A person reached at the racetrack said the “Street Outlaws” producers used the Douglas track for testing.

Team Texas posted on social media they would be gathering for the public at G-Ma’s Diner in Mills on Wednesday evening.

It’s unclear when the finished episodes will air, and with ironclad contracts often used in reality competition shows it’s very likely racing fans will have to wait months before they find out who sped away with the $100,000 prize.