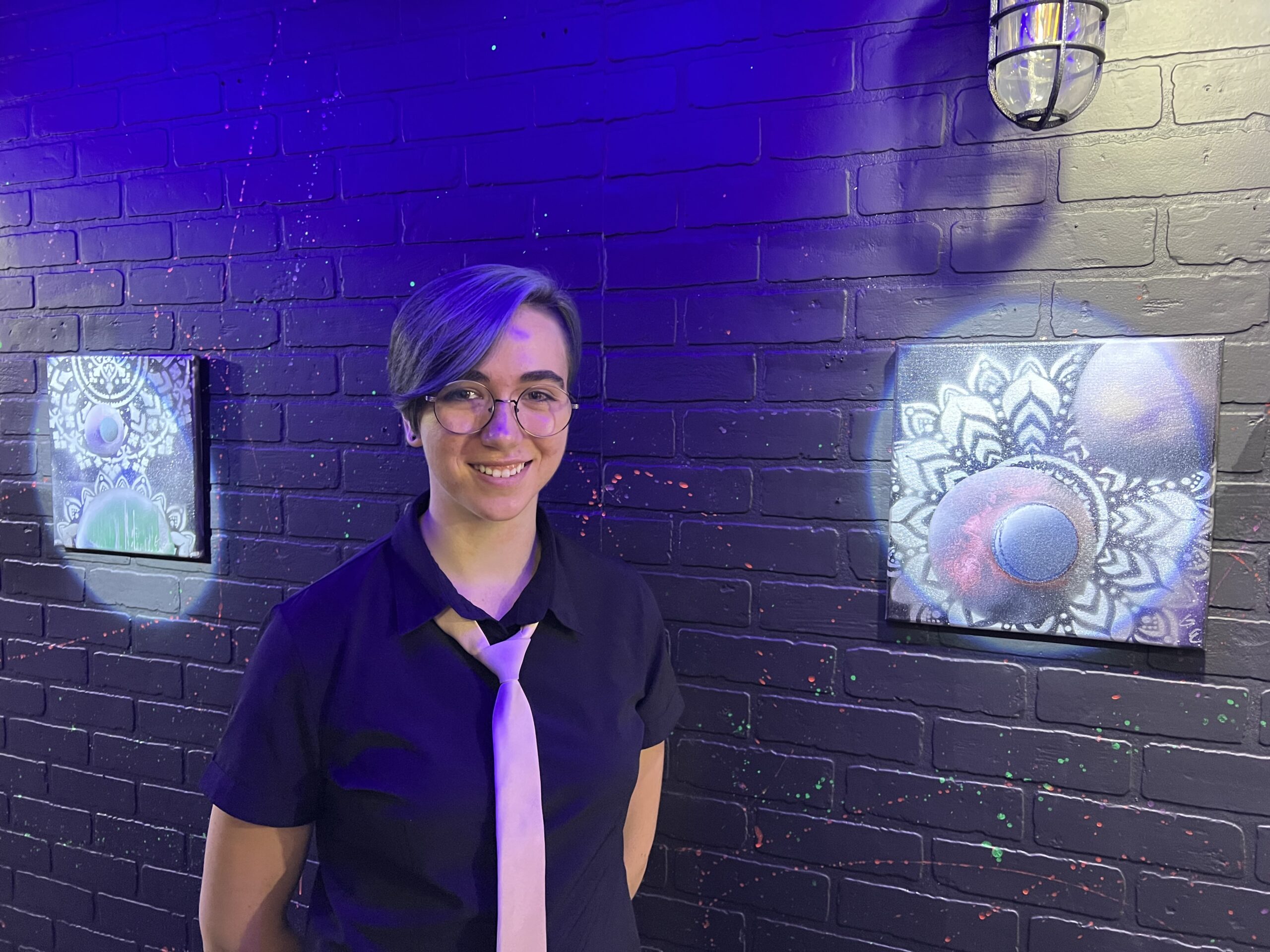 Juliana Engelman, an artist who works as a barista, will hold an opening of "Controlled Chaos" in the Bourgeois Pig's Alley Gallery on Friday. (Brendan LaChance, Oil City)

CASPER, Wyo. — A Casper artist who works as a barista at the Bourgeois Pig, 114 W. 2nd St., will hold an opening for her new “Controlled Chaos” show in the downtown coffee shop’s Alley Gallery on Friday.

Juliana Engelman, who said Thursday that her art is usually done with drawing, experimented with something relatively new for her by creating the series of planet-mandala-themed pieces featured in her new show. Instead of drawing, she relied on a method that used spray paint, stencils, cups, bowls and things like newspaper and plastic bags to add some texture.

“Each one has a handful of planets that I’ve done and then in the background I spray-painted the silver mandalas that I used stencils for,” she said. “They’re all unique, but they all have this same sort of thing going on.”

In terms of process, Engelman said she began by laying down some background colors and adding some textures. Next, she used bowls or cups to create the planet shapes and add galaxy elements to the background.

“I let that dry and then I’ll put the stencil down, put the cups back down so it doesn’t cover the planets and then hit it with some silver,” she explained.

When it comes to why she likes planets, Engelman said she’s had a long fascination with space.

“Astronomy was probably one of my favorite classes that I ever took — the online college class when I was a junior,” she said. “It was just really cool. I’ve always really liked space and it just looks so cool.”

While she wants to branch out and start spray-painting some other forms, the simplicity of the shape of planets has been good ground for experimentation, Engelman said.

“The planets are pretty simple and it’s fun to mess with colors and textures and all that,” she said.

Engelman isn’t too concerned with conveying a particular message with her art, though her interest in science fiction stories enriches her interest in the form of planets, she said.

“I grew up on Star Wars, got into Star Trek a little bit, Firefly, Aliens,” Engelman said, listing some of her sci-fi influences.

In terms of the colors for planets, Engelman said her favorite combination is red and black, though pink and yellow is starting to compete for top spot.

“I also like to add metallics to it,” she said of the planetary color schemes in her works. “So in some of them you’ll see the copper, you’ll see some silver. I like to put silver with greens and blues. Gold really does actually go with a lot. I like to put that one with purples and stuff — like complementary colors I think will look good together. I don’t put a whole lot of thought into it beforehand. I just go at random and it usually turns out pretty good.”

Engelman’s love for drawing dates back at least to elementary school, and she became increasingly interested in perfecting that art around fifth and sixth grade, she said.

She’s also worked with watercolors and acrylics, with most of her experience in those mediums self-taught aside from some art classes during her senior year. Her love of creating art relates to its versatility.

“You can use it for a lot of different things,” Engelman said. “I think what I like a lot is you create something out of nothing. You took some random idea from your brain and you made it into a physical thing that people can look at — something that could be beautiful.

“A lot of people like to put meanings behind [art] — and I do really appreciate art that sends a message — but I actually really like to make art for art’s sake. Just something beautiful for people to appreciate or something that can beautify a space.”

The show in the Alley Gallery has some synergy with the previous show that was on display by Betsy Bower and Britt Boril. Bower painted the hallway black for that show, which ended up working nicely with the art Engelman created.

“When Betsy painted it black, I was just like, ‘You know what, that works perfectly, just leave it,'” she said.

Engelman was also able to use space at Bower’s art shop to create her pieces in exchange for help cleaning up, she said.

In terms of the title for the show, Engelman said that “Controlled Chaos” is something that she thought up on a whim when asked what it should be called.

“I don’t know if that’s still the title,” she said. “It was going to be called Controlled Chaos because the process itself really doesn’t look like anything until the end when you have it all come together. And there’s really no rhyme or reason for the colors. Like the texture — you’ve got to trust the process and it comes together in the end.”

There is a soft opening for Engelman’s new show on Thursday amid the Casper Art Walk in downtown Casper. The formal opening will be held starting at 7 p.m. Friday at the Bourgeois Pig. Engelman will be there to talk to anyone interested in her work.

If people are interested in purchasing any of the pieces, they can talk to Engelman while she’s working behind the barista counter of the coffee shop or ask any of her colleagues about the work.