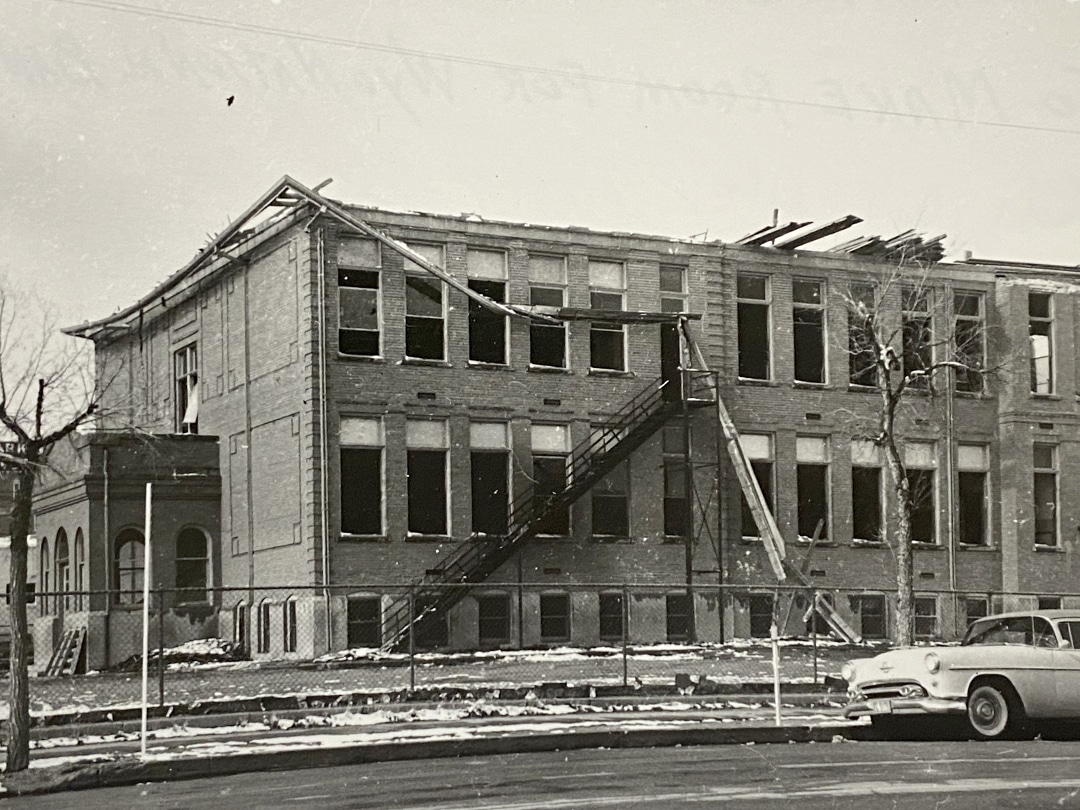 Washington School, a landmark on the corner of First and Durbin for decades, is seen being demolished in the early 1960s. (Casper College Western History Center)

CASPER, Wyo. – Casper’s Washington School was documented with photos and nostalgia during the end of its final school days in June, 1960.

The location on the corner of First and Durbin was home to Casper’s first school starting in 1881, when Central School first opened. A new brick school was built there in 1910, and a large addition around that building opened in 1911. During the following decades, thousands of young Casper students attended the school, which was eventually renamed after the first U.S. president.

By the 1950s, Casper’s post-war economy was booming, and the growing population needed more school buildings that were fit for the era.

In 1960, the school district sold the Washington School property for a cool $504,350, which translates to more than $4.5 million in today’s dollars. At the time of the sale the purchaser was kept secret, adding a bit of intrigue as the public awaited word of the building’s ultimate fate.

Full-page photo spreads and stories filled Casper’s newspapers as they eulogized the building and marked the end of an era.

“From its red bricked walls have come countless leaders for the pioneer community, taught by teachers of the ‘old school,'” wrote photographer Chuck Morrison in the June 4, 1960 edition of the Casper Morning Star. Like many Casper residents, the longtime newspaper photographer was a Washington School alumni, but he had an even stronger connection. For 30 years his father, Angus Morrison, was the custodian and building manager who lived with his family in an apartment on site.

The money raised from Washington School’s sale was put into new classrooms and supplies around the county, including a new school in Paradise Valley. A total of 27 new classrooms were added by 1964, according to a Casper Star-Tribune article from the era.

The beloved old brick building with its creaky wooden floors and drafty windows was eventually demolished and replaced with something entirely different in every imaginable way.

Instead of bricks and wood, a new building made of concrete, granite and glass almost literally sprouted from the ground.

Designed by Denver architect Charles Deaton, the new Wyoming National Bank Building was a modernist and engineering marvel for the era. Its circular dome, meant to resemble a blooming flower, was constructed out of concrete panels that were cast on-site in forms created from wood and dirt dug up from the lower level.

According to a splashy Casper Star-Tribune article published in May 1964 marking the grand opening, each panel, or “blade,” weighed approximately 21 tons and measured 44 feet high. The 17 panels were aesthetically striking and also act as the structure’s supporting columns. Hugging the circular dome is a sleek modernist building with window shapes that played off the blades of the circular section, while the dome served as the vast bank lobby and bank teller station.

According to the Society of Architectural Historians, “Deaton’s design was a departure from earlier Wyoming banks, whose architecture stressed tradition and solidity.” The new bank was constructed only a few years after First Interstate Bank built their new modernist building just across the street on First, which at the time was a striking, sleek multi-story building with a generous use of glass at street level. Its modernist aesthetic has been obscured over the decades by renovations, but the Wyoming National Bank building still resembles its original design on the outside.

In 1968, Casper architect Harold Engstrom was commissioned to design and construct a 177’-tall, free-standing pylon that held the bank’s signage and originally a state-of-the-art electronic clock and temperature display. In 2016 the structure was threatened with demolition by then-tenants Wells Fargo before a public outcry changed their plans.

Wells Fargo, which eventually inherited the building after numerous bank mergers, listed the property for sale in 2018 and the following year announced its sale to an investment group run by Casper entrepreneur and former Natrona County Republican Party chair Joe McGinley.

This story was updated to reflect that Joe McGinley is no longer chair of the Natrona County Republican Party.