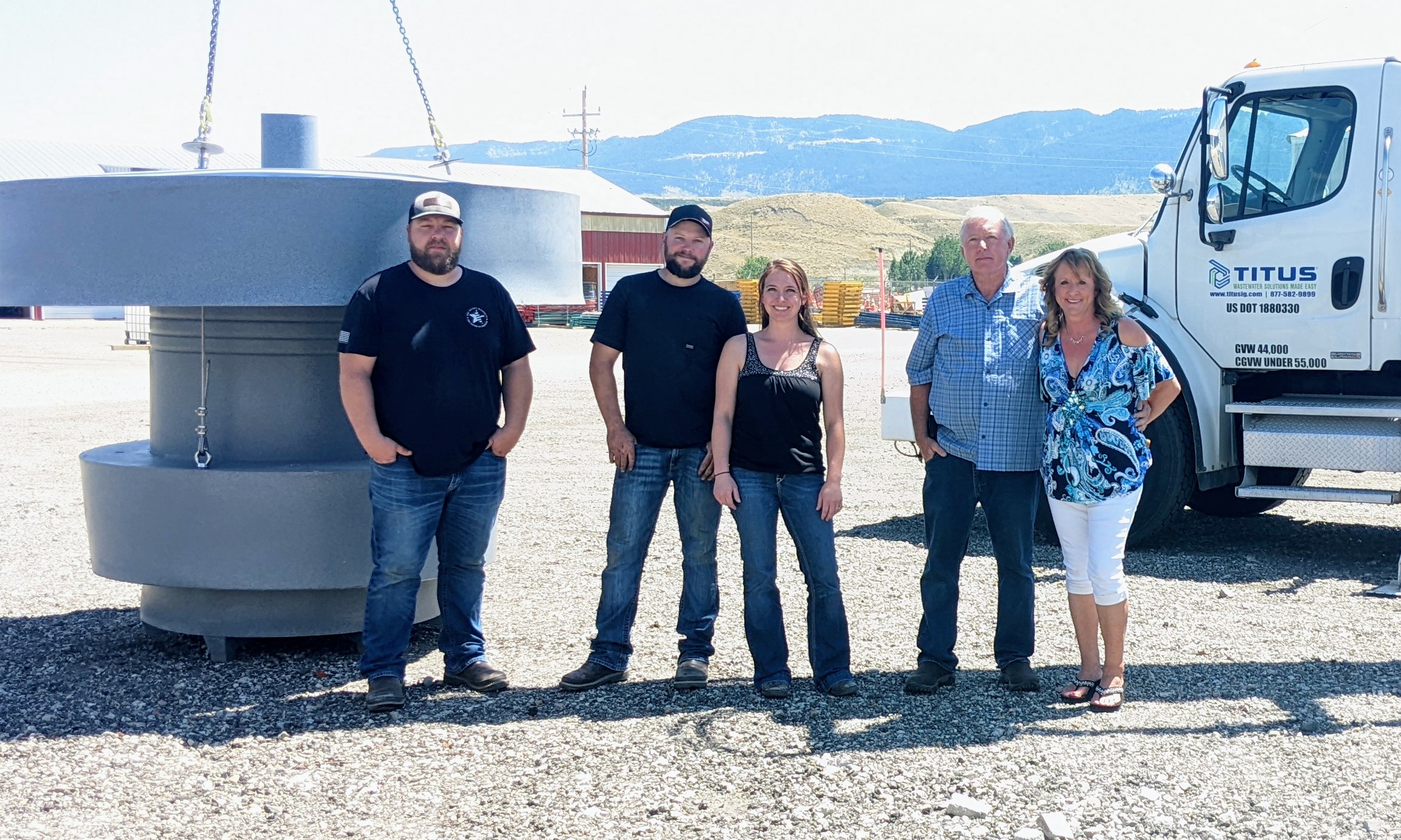 The company was previously headquartered in Prineville, Oregon, and began to look for a new home in late 2021. Owners Jeane’e and Lewis Titus’s daughter Kristi recommended the company consider Wyoming after she met Governor Mark Gordon during a hunt in the state, the press release said.

“While looking into relocation within Wyoming, Lewis discovered Casper, which provided the central location, space, and incentives they needed for a centrally located headquarters,” the company said. “Connecting with Advance Casper, Natrona County’s economic development organization, helped to recognize the mutual advantages for TITUS and the community should TITUS choose to relocate to Casper.”

“The people we met were incredibly warm, extremely supportive, and presented a very livable, diverse, and welcoming community,” said Jeane’e.

The Tituses made several trips to Casper before deciding to relocate the company here.

TITUS Wastewater Solutions was able to secure a commercial property at 5301 CY Ave. in Casper in a deal with former boat dealer Extreme Performance, the press release said. The company’s new facility includes 44,000 square feet of space in a four-building complex on a four-acre lot with room for expansion.

“Over a dozen truckloads, including 53’ dry vans, 48’ flatbeds, open trailers, boom trucks, and personal vehicles, arrived in Casper in mid-June, and now one organization and three families are ready to begin the next chapter of their journey, calling Casper ‘home,'” the press release said.

The company also decided to rebrand as part of its move to Casper. It was previously called TITUS Industrial Group.

Lewis has 34 years of experience as a millwright and pipeline maintenance technician and has specialized in corrosion control, the release said. Lewis and Jeane’e initially launched a company called TITUS Industrial Sealants in 2000 before that became TITUS Industrial Group in 2004.

“The Tituses traveled the west coast and Pacific Northwest, offering solutions for the pipeline and wastewater industry with products to address corrosion, leaking, infiltration, and inflow,” the press release said. “The formation of TITUS Industrial Group attracted Solmax (formally known as GSE), and TITUS began representing HDPE liners from California to Colorado. They also became a manufacturer’s representative for ductile iron frames and covers. In 2008, TITUS continued to diversify, adding mixing aerators to the distribution product line.

“In 2016, Lewis began to develop a more durable, effective, and robust mixing aerator product,” the press release added. “Lewis and Jeane’e were introduced to Todd Brason, an entrepreneur, private investor, and business strategist, through a mutual industry connection. Todd was intrigued by the wastewater industry and the opportunity to support the development of a product that addressed various wastewater issues.

“TITUS and Brason joined forces, merged their organizations, and opened an east coast office in Buffalo, NY. This merger launched the TITUS® Twister® Mixing Aerator and created jobs, expanding their team of Fabrication/Assembly Technicians to manufacture the aerator. The need for national distribution became evident, and TITUS brought on a Director of Business Development to oversee the building of a robust distribution network.

“Over the next two years, the TITUS® Twister® design was finalized and patented in both the US and Canada. TITUS’s distributor network was established to educate and supply local markets throughout North America. As an organization, TITUS strived to source local materials for the fabrication of the TITUS® Twister® and provided a product truly made in the USA.”

The COVID-19 pandemic impacted the company, but Lewis took time to focus on developing a new product in 2020, the release said.

The growing demand for its products and the development of its distributor network were factors in TITUS’s decision to relocate, the release said.