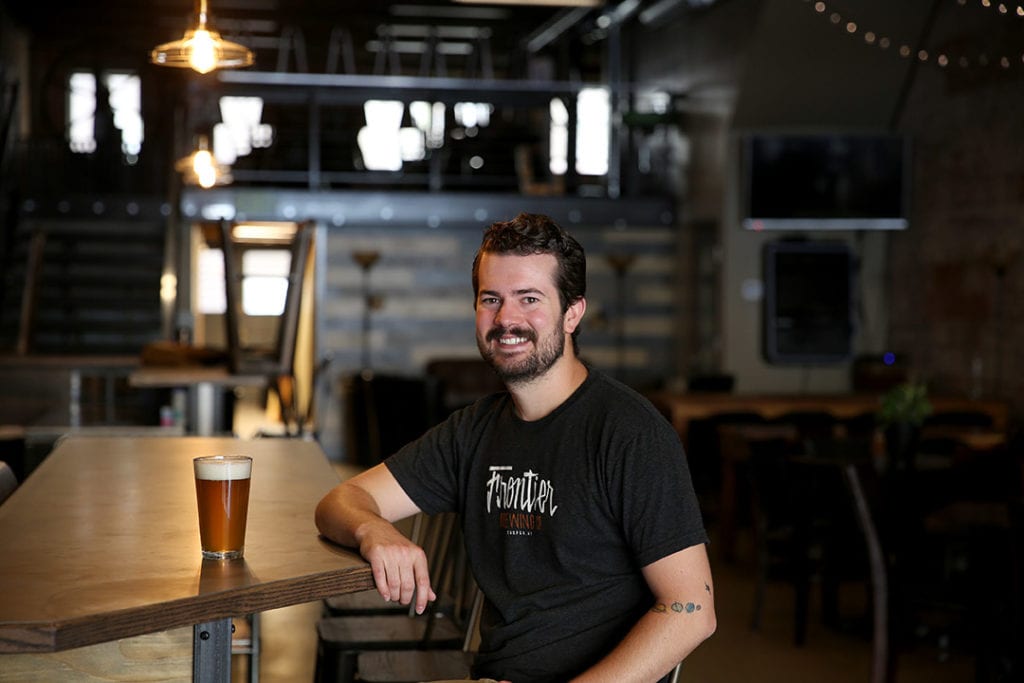 Frontier, which opened last week just before the eclipse festival, is the first of three craft brewers planned for Casper. These developments finally bring Casper into the craft beer party that smaller towns such as Lander, Sheridan and Ten Sleep have been enjoying for years.

Frontier is Rudkin’s first professional brewing job, but he’s been taking the craft very seriously since he made his first batch in college. He discovered craft beer during a cycling tour with friends. “My travel mates bought me a six pack of Newcastle brown ale,” remembers Rudkin. “For the rest of the trip we got to experience craft beer in towns across the entire United States.”

From there he jumped right into craft beer. He started brewing using extract brewing kits, but quickly made his way to more complicated all-grain brewing where flavors can be infinitely controlled. He’s approached brewing from the science angle from day one. “It’s basically all science,” said Rudkin.

Rudkin earned a communications degree and worked in various related jobs after college, but the thought of brewing as a career took hold early on. “There is unlimited depth to what you can pursue in brewing,” said Rudkin. “You’re never going to get there and go ‘Ok, I know it all.’ That’s never gonna happen. There’s always more to learn.”

While the styles of craft brewing seem infinite, Rudkin is most attracted to traditional British and American styles. “I like tradition and I like history,” said Rudkin. Tradition doesn’t mean boring, however. “It’s actually tradition to innovate.”

With the craft beer market now mature, and massive controversial conglomerates like AB-InBev muscling their way in, Frontier is aiming for what’s called the nano-brewery segment. For example, a brewery can make 50,000 barrels of beer and be called a microbrew. Frontier plans to brew just 125 barrels per year. The nano market is so new, the brewing system Frontier purchased is just out of prototype phase, according to Rudkin.

There are other benefits to remaining small. “The smaller you are, the more freedom you have to experiment,” said Rudkin.

The first line of beers Rudkin is developing for Frontier will be a pale ale, golden ale, a rye and an IPA. After that he’ll start experimenting with different styles on rotating taps, including using local ingredients ranging from raspberries to sage.

Frontier will also continue to offer other Wyoming craft brews on their self-serve taps after their house beer is ready to sell, which should be two or three weeks. Names for their beer are still in the works.

Rudkin is excited to be part of a downtown and craft beer resurgence in Casper.

“It’s not a side operation,” said Rudkin of the brewery. “It’s the heart of what we do.”

Frontier Brewing Company and Tap Room is located at 117 E. Second Street in the old Wolford’s Shoes building. Hours are from 2:00 to 9:00, Wednesday through Sunday.