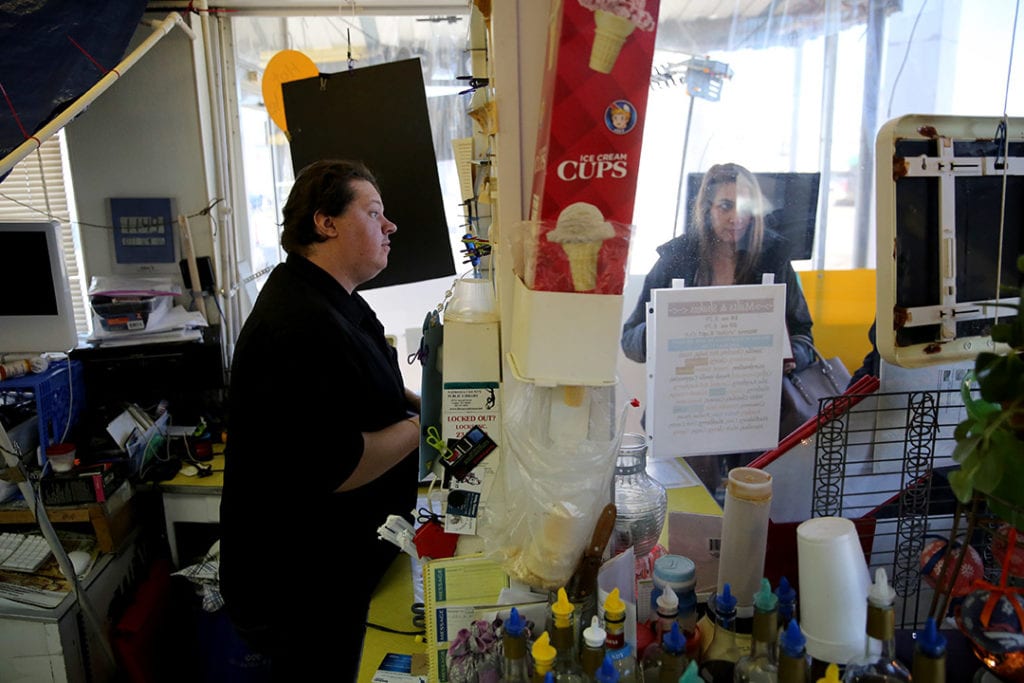 JC Burgers manager Justin Foote-Page takes a customer's order at the original window of JC Burgers recently in Casper. The diner was originally built as a Tastee-Freez in 1957, and the dining section outside the order window was enclosed in the 1970s. (Dan Cepeda, Oil City)

For over 60 years now, a tall sign with a blast of neon and sharp shapes has been making its distinctive statement on a quiet corner in central Casper.

When JC Burgers first opened as a Tastee-Freez in 1957, that corner was anything but quiet. At the time it was just off the busy Yellowstone Highway, which before I-25 was built was the main road into and through town.

While the town’s action has moved, the small diner has remained much the same. This time capsule feel is something manager Justin Foote-Page is hoping to use to his advantage.

“Back in the 50s, we were one of the busiest places in town,” said Justin.

“I want to keep the nostalgia of the place,” said Justin, who is running the business with longtime co-owner and manager Kathy Bodenhamer.

While nostalgia is good, age still leaves its mark. The neon in that vintage sign is often broken, so Justin hopes to address that. He’d like to resurface the parking lots to hopefully attract car shows in the summer.

Tastee-Freez was a rapidly growing business in the 1950s, but it began to shrink and by the 1980s the owners left the franchise and rebranded JC Burgers.

Still, the spirit of the original concept remains.

Soft-serve ice cream made by vintage machines is still available, along with shakes and malts made at the same vintage counter. The beef is locally processed at Dan’s Meat Processing in Evansville and never frozen, and the buns are specially baked by the same supplier.

The buns and meat sizzle on the original vintage General Electric kitchen grill, too.

Justin has met with local preservation groups to get a historical designation for the restaurant. He has a certain affinity for the old diner, which explains his desire to rebuild its loyal customer base.

“I think I should’ve been here back then, it just seems more like my era,” said Justin. “I listen to the old music all the time, it just seemed like a great time and a time when people got along with other people.”

While the catering business also helps keep the lights on and grills hot, it’s the original diner that Justin wants to make shine again.

“I want to have a little nostalgic area in Casper where people can go and be happy again,” said Justin.

JC Burgers is located at 711 E. Collins and open Monday through Saturday from 11 a.m. to 7 p.m. You can view their Facebook page here.