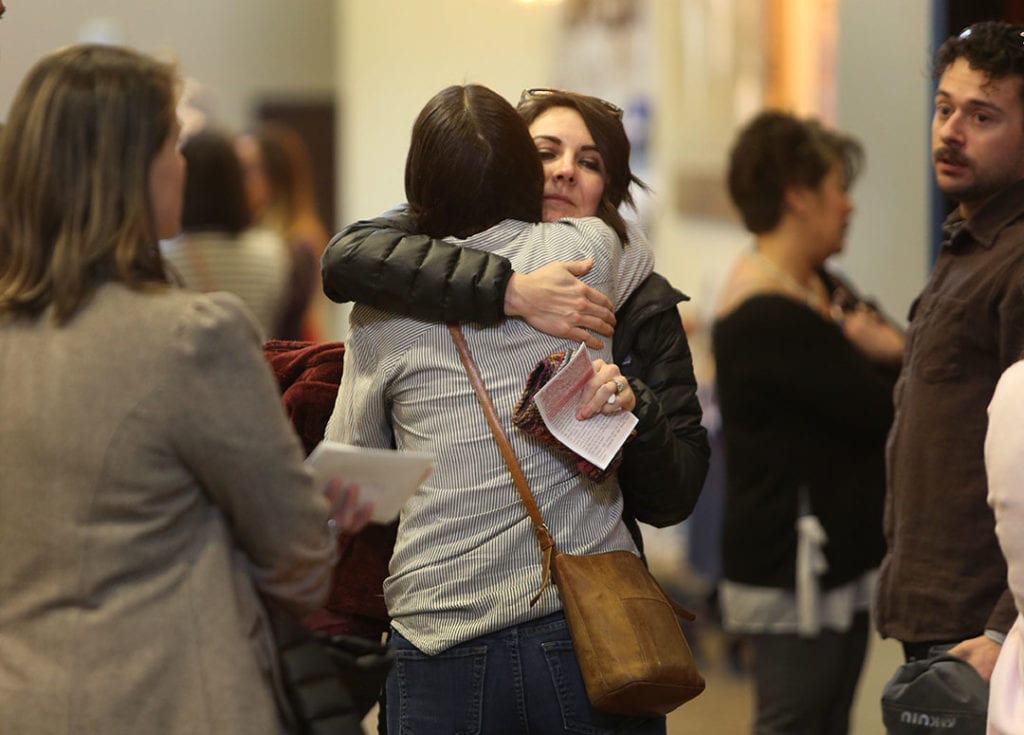 Mourners gather outside of the chapel after a memorial service for Deborah Steplock on Tuesday, March 5, at Highland Park Community Church in Casper. She will be laid to rest in Memphis, Tennessee, where she was born. (Dan Cepeda, Oil City)

A classic Elvis Presley song called “I Got Lucky” played as photos were projected on big overhead screens during a memorial service for Deborah Steplock at Highland Park Community Church on Tuesday morning.

The song was fitting, in part because Memphis-born Deborah was a lifelong Elvis fan.

Also fitting were the photos of Deborah, always smiling. Deborah hiking, finishing marathons, posing at Disney resorts, enjoying wine on the porch, or cocktails and dinner with her husband, Dr. Louis Steplock. Photos with her children, grandkids, pets and friends.

“I was lucky to have her for 58 wonderful years,” said Debbie’s older sister Diane Ward. “We made it a point to call every Thursday, we called it our ‘chat time.’ I was blessed to have her as my sister.”

Barbara Steplock, the eldest of five kids, thanked the community for their outpouring of support before recalling her mom’s life.

“She was a ballerina and a cheerleader, she grew up playing the piano and going to any concert that she could,” said Barbara.

Barbara said after her parents married, her dad answered an ad for a physician in the “beautiful Rocky Mountain area.”

The couple relocated to Casper and started their family. “And the whole family followed…this is when the population of Casper doubled and this is before they had kids,” said Barbara.

“She was always a cheerleader for family, her friends, her sports teams but above all, her children,” said Barbara.

“Our dad would tell you that he wasn’t the perfect husband, but that she was the perfect wife,” she continued, “but nobody loved her as much as he did.” Barbara said her mom often said she felt like she was living a fairy tale.

Barbara ended with a thought about her mom’s tissue and organ donation after her death. “Even though she is not physically with us anymore, it is still comforting to know that her heart is still beating,” she said.

Pastor Mike Fackler addressed “the elephant in the room.” Deborah died from injuries after being shot in her home by her son Andrew, 27.

“The ‘elephant in the room’ goes by many names…it goes with questions. Why? How come? What if? And we all came in here holding a piece of that,” said Fackler before moving into scripture about healing and forgiveness.

Fackler said he met with Deborah’s family and asked what she’d want if she were here.

“She would ask you to find it in your hearts to forgive Andrew,” said Fackler. “That sounds like something Jesus would do…that sound like freedom to me, like peace to me.”

There were dozens upon dozens of happy memories on that slideshow earlier in the service. As the slideshow drew to an end, it stopped on a photo of two people…Debbie and her only son, Andrew, both beaming.