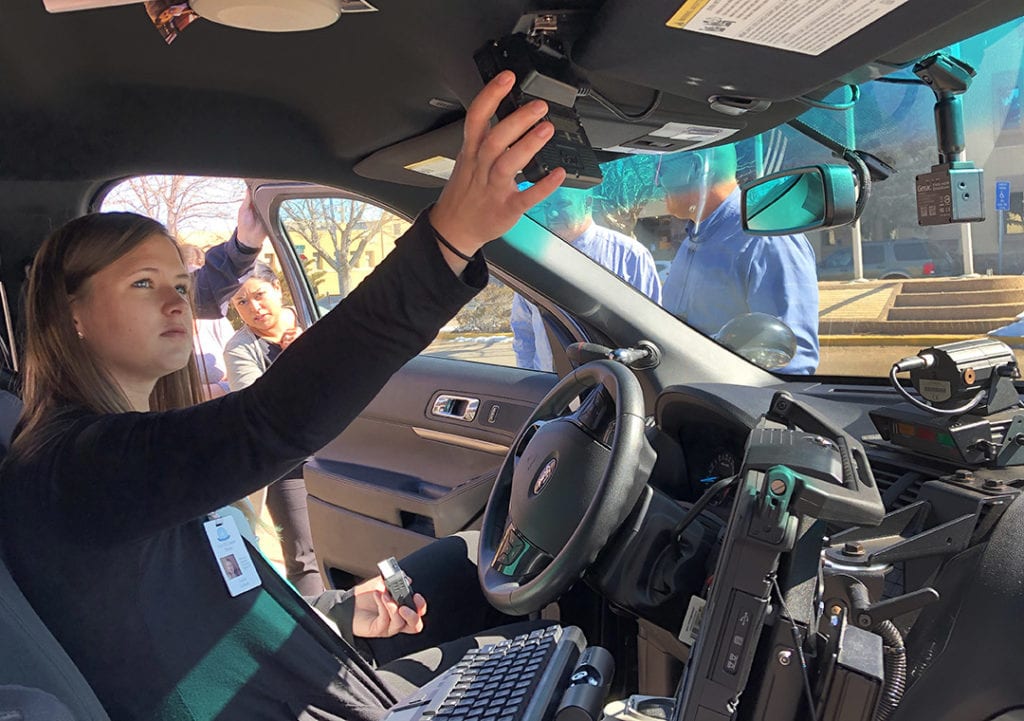 Casper Police fleet supervisor Taylor Gilbert demonstrates a police car camera system during a media event at City Hall in 2019. The system’s front camera can be seen on the windshield at right. There is also a rear-facing camera and a body-worn camera with the system. (Dan Cepeda, Oil City)

A routine probation check by a Casper Police officer turned into a foot chase around and behind the Hardee’s restaurant on First and Poplar recently.

It would be a simple footnote by now by police standards except for one thing…the entire sequence from start to finish was captured in high definition video with a camera worn by the officer.

That video was shown to Casper media during a press conference announcing the implementation of a $1.5 million project that will replace the Casper Police fleet of obsolete car cameras with an integrated body and car system.

“We will be filming every contact with our citizens that is related to police service,” said Casper Police Chief Keith McPheeters.

The search for a new video system started early last year after funding was approved. Twelve vendors responded to an RFP, of which three were chosen to field test over two months in Casper.

After gathering input from officers in the field, a California-based vendor named Getac was ultimately chosen.

“We purchased a hundred body-worn cameras, and we have 85 in-car units that will be installed,” said police technology manager Scott Hoffman.

The cars will be equipped with two cameras, front and rear, which are turned on automatically when officers engage their light bars or drive over 70 mph. They can also be turned on manually.

Body cameras are switched on by officers during any stop. The operation is performed with one button. A voice on the camera confirms the setting or mode.

All data is stored locally and later uploaded and stored in the cloud where it can be accessed by officers at any time.

“If there’s something that happens in the street that we need to view right now, that gets transmitted immediately,” said Hoffman.

In addition, the cameras can live stream back to police or operations headquarters if needed.

Car cameras also have live geolocation and tagging, which is a future feature on the body cameras.

The old system was purchased in 2008, according to Hoffman, who says video quality and speed has since made enormous strides since.

“They didn’t have the capability to take a camera with them outside the vehicle,” said police fleet manager Taylor Gilbert.

Chief McPheeters says the amount and quality of video gathered in the field will benefit evidence gathering and training for cadets.

“You can follow a case from the street all the way to their arraignment,” said Hoffman.

All officers are now wearing the body cameras, according to Hoffman, and the car systems are being phased in over the next few months.