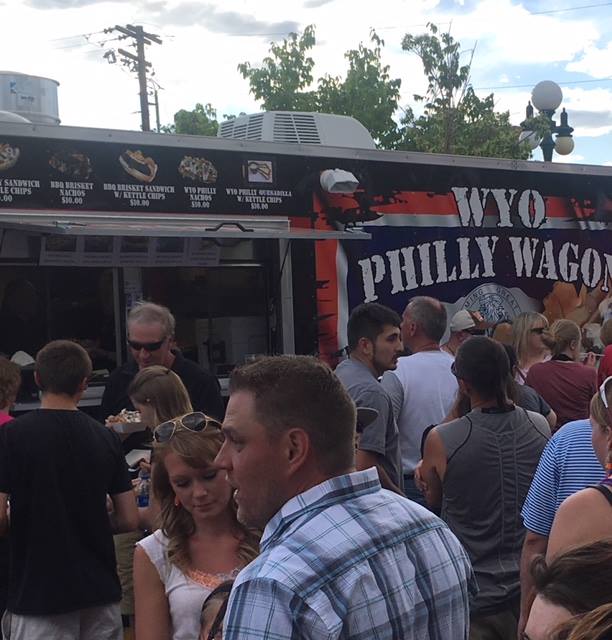 CASPER, Wyo. — Wyo Philly Wagon and Caputa’s Catering owner Rob Caputa said he’s concerned that the City of Casper has too many regulations when it comes to the oversight of food trucks.

“There should have been zero regulations as far as I’m concerned,” he said. “The Natrona County Health Department has it under control.”

Caputa said that since the City requires food trucks to obtain temporary parking permits in order to operate downtown, he is in favor of a proposed amendment to the Mobile Vendor Parking Permit ordinance that would allow signs to be posted earlier informing the public that parking spaces are reserved.

Nevertheless, Caputa said he thinks the cost of those parking permits are too high. He said that each parking space costs $25, but that food trucks often require multiple spaces.

Caputa said what he’d like to see is an annual permit that allows food trucks to operate between 3-10 p.m.

“It should have been a $25 a year permit to operate in the City of Casper per year,” he said, though he later added that even a $100 per year permit price could work and would be preferable to having to obtain the $25 per parking space permits each time food trucks want to operate downtown.

Caputa said that the main reason he is concerned about these costs was not due to concern for his own business, but for younger people hoping to one day own their own food truck.

He said that some of the extra fire code regulations the City Council is considering adopting for mobile food vendors could prevent aspiring food truck owners from getting a start due to the cost of installing things like oven hoods and fire suppression systems.

“I’m just worried about the future of food trucks, about the young guy who starts with a little barbecue stand and wants to work his way up to owning a food truck,” Caputa said.

He added that he thinks too many regulations and associated costs could prevent that from happening.

“It’s a craft,” Caputa said. “It’s an art work and you know, they squish that. They stifle it.”

He said that the Wyo Philly Wagon’s fire suppression system cost $10,000. Caputa added that costs such as this or the cost to install oven hoods could be too steep to allow young people to get into the business.

“It’s the only place in the state of Wyoming that does that,” Caputa said. “Once regulation has started, it is never ending.”

He added that he thinks one of the problems is that some members of the City Council, the City or the fire department don’t seem to understand food trucks.

“I think they still think of food trucks as old carnival food,” Caputa said. “I think they think it is an eye sore. But my kitchen is a real chef’s kitchen.”

He added that he’s heard Casper Mayor Charlie Powell previously suggest that a space for food trucks be established downtown. Caputa said he thinks that is still a good idea and suggested that a parking lot near Midwest Avenue could serve as such a space.

“Three or four food trucks would drag people downtown,” he said. “I have people driving from Glenrock to get their Wyo Philly fix.”

Caputa said that while it may be hard to track, he’s confident that food trucks help bring in customers that will spend money at other businesses as well.

“You know, look at the Gruner Brothers, they get it,” he said. “They know food trucks bring in customers and they have a great facility overlooking Casper.”

Caputa said that he was also responsible for past summer food truck gatherings at the Sunrise Shopping Center parking lot.

“2,000 people came to my Windy City Wednesdays,” he said. “Think of the exposure that food trucks bring [to nearby businesses].”

Caputa said that he’d invite food truck owners from around the state to those events, but said that some of them couldn’t or didn’t want to come to Casper due to regulations here.

“I tried to get food trucks from all around,” Caputa said.

He added that he’s only aware of three food trucks still operating in Casper.

“There’s only three of us left,” he said. “Food trucks have nowhere left [that] they can go?”

“Casper spends so much money on street lights and everything to brighten up the downtown and that’s great, but food trucks would bring all these people downtown too.”

“When the cycle comes back around, we just need to be one big neighborhood happy family,” he said, adding that previous disagreements about food trucks downtown may have turned some people off. “It created some black eyes. It just gives a bad vibe out there.”

Caputa reiterated that he thinks less regulations are needed.

“Look at Mills, you can set up anywhere out there,” he said.