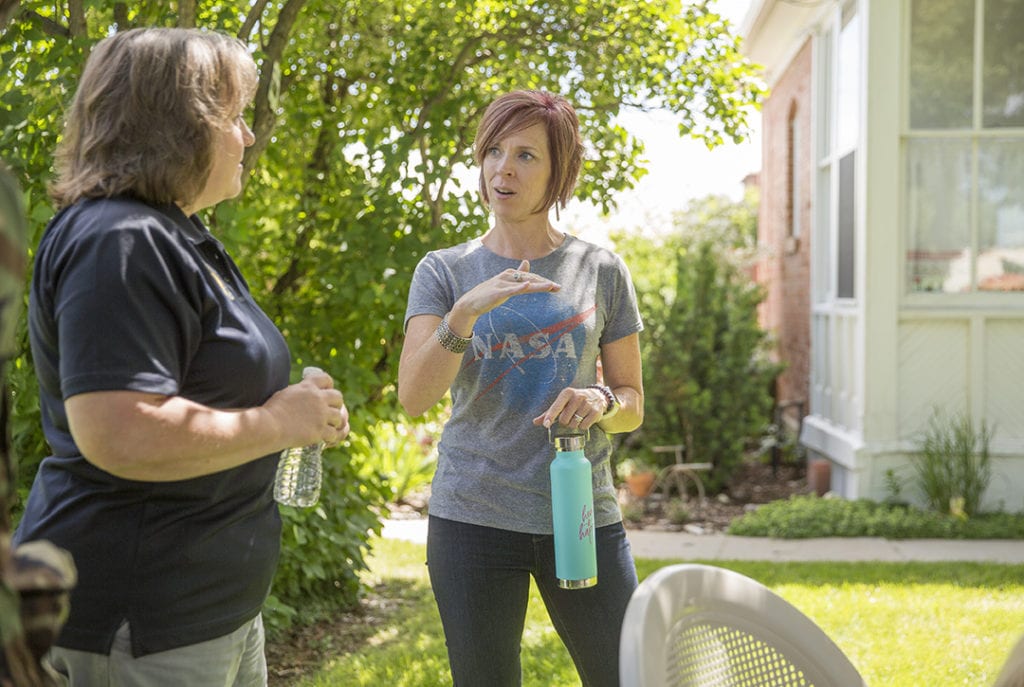 NASA engineer Ryan Prouty attends a space camp for children at the Historic Bishop House on Thursday morning in Casper. Prouty, a Kelly Walsh High School grad, is one of the key engineers on the International Space Station. (Dan Cepeda, Oil City)

In 1997, Ryan Prouty was among hundreds of students at the University of Wyoming’s graduation ceremony.

Over a year later, she was in Moscow, watching the control display systems she designed as the Space Shuttle delivered and docked the American section of the International Space Station to the Russian unit.

She calls it the most emotional moment of her life.

“To hear the cheers and shouts echoing throughout all of the building was just incredible,” recalls Prouty.

Prouty, a mission integration and operations manager for the International Space Station program at NASA, grew up in Casper and was in town this week. She gave presentations and talked to kids during a space camp held at the historic Bishop House in celebration of the upcoming 50th anniversary of the Apollo 11 moon launch.

“I am in charge of all the rocket launch schedules, what we pack in the rockets and what the crew does with everything we send them,” she said.

Prouty says her office integrates all of the work from about 12 different offices in the Space Station program.

Prouty integrates such things as requirements for experiments, launch hardware, maintenance, “the vehicle office that’s in charge of keeping the Space Station in the sky,” among other technical challenges that keep a small lab with humans safely floating in space.

As Prouty tells it, the story of how a Kelly Walsh student who studied mathematics at the University of Wyoming landed at NASA is pretty straightforward.

“I work with all of these people who love space and planed their entire life to either be an astronaut or work for NASA,” said Prouty. “My story is a little different.”

Prouty studied mathematics “simply because I liked math, it was my favorite subject.”

She used her situation of being great at math, a female and living in a small state to try her luck with an organization known for its diverse hiring practices.

“I was sitting in a salon one day reading an article about the Russian space station Mir, and it intrigued me so much I applied to move to Houston and work for the International Space Station.”

Much to her delight, she got the job.

“I saw something and thought, ‘that is something bigger than myself and I want to do that,’ and I went and did it.”

She enjoys giving speeches to children, and hopes her life path inspires children to be open to new opportunities.

“One of the questions kids dread is ‘what are you gonna be when you grow up,’ and some of them don’t know, so it’s stressful. I didn’t know.”

Prouty credits math with helping her solve more than equations.

NASA’s work on the Space Station is building knowledge and technology for the future of space exploration, including proposed settlements on Mars.

“A lot of the technology demonstrations on Space Station are specifically selected and executed for exploration technologies we need for the moon and Mars.”

“I speak to students and teachers every year all over the country, it’s one of my favorite things to do,” said Prouty.

“I feel like it’s my responsibility to go out and tell people what we’re doing (at NASA) and get them excited about it all over again.”

Prouty still marvels at her launch from KW and landing at NASA, even after all these years.

“Even today I’ll sit in a big meeting deciding on launching a rocket, and I’ll think to myself ‘I can’t believe they’re letting me do this. This is incredible.'”