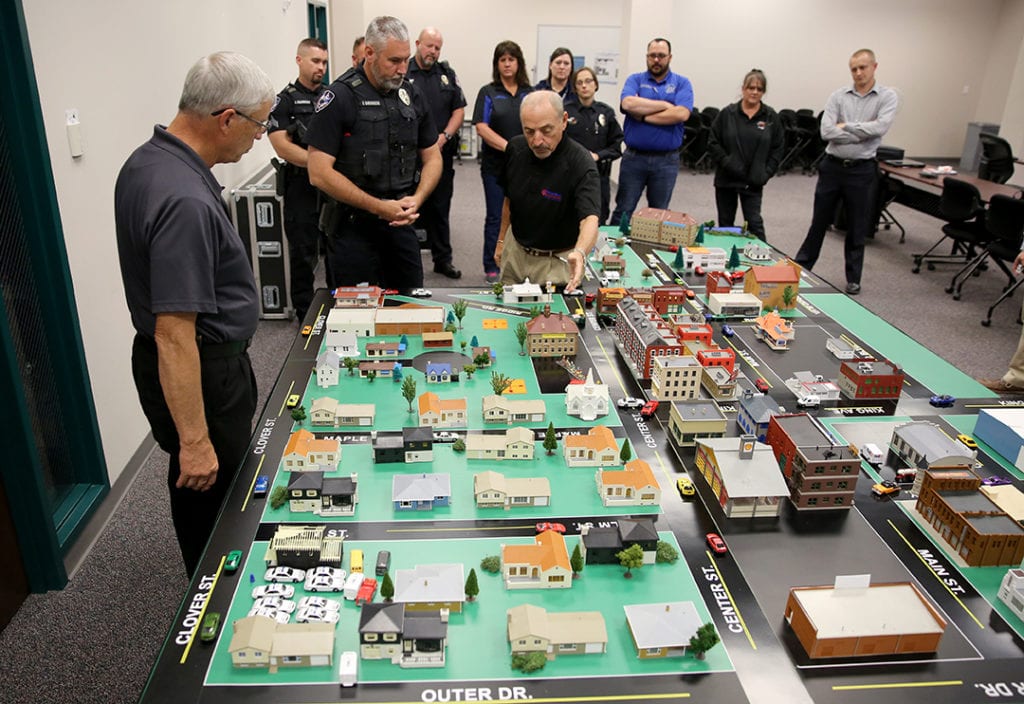 Representatives with BOWMAC run through a training scenario for the benefit of media on Thursday at the Public Safety Communication Center in Casper. The training program helps first responders learn to react during emergency situations, such as mass shootings or natural disasters. (Dan Cepeda, Oil City)

CASPER, Wyo. – The models look playful, reminiscent of the inviting toy houses and cars that made up Mr. Rogers’ imaginary neighborhood.

In reality, however, the purpose is deadly serious.

“This training is designed to give first responders the experience to respond to critical incidences,” said retired police officer and BowMac designer Vincent Faggiano.

The scenario on Thursday for the benefit of local media was a chemical spill incident involving a school bus. Using the model and in real time, streets were blocked off, children moved safely to areas and police and medical responders were dispatched to various optimal locations. The scenarios involve responders on the ground and dispatch operators.

Faggiano says most orders for BowMac come from communities that have already experienced a traumatic incident, but praised Casper for using the system beforehand.

“If an incident does occur and they’ve trained together, then they’ll be better prepared to respond as a team,” he said.

Purchase of the roughly $86,000 system was approved by City Council earlier this year. Training on the system takes three weeks, and the Casper Police and dispatch members who have trained can then lead the trainings.

“We can teach other officers, we can teach other departments from around the state who’ll pay us,” said Casper Police spokesperson Rebekah Ladd, who said it could eventually make up the cost of purchase.