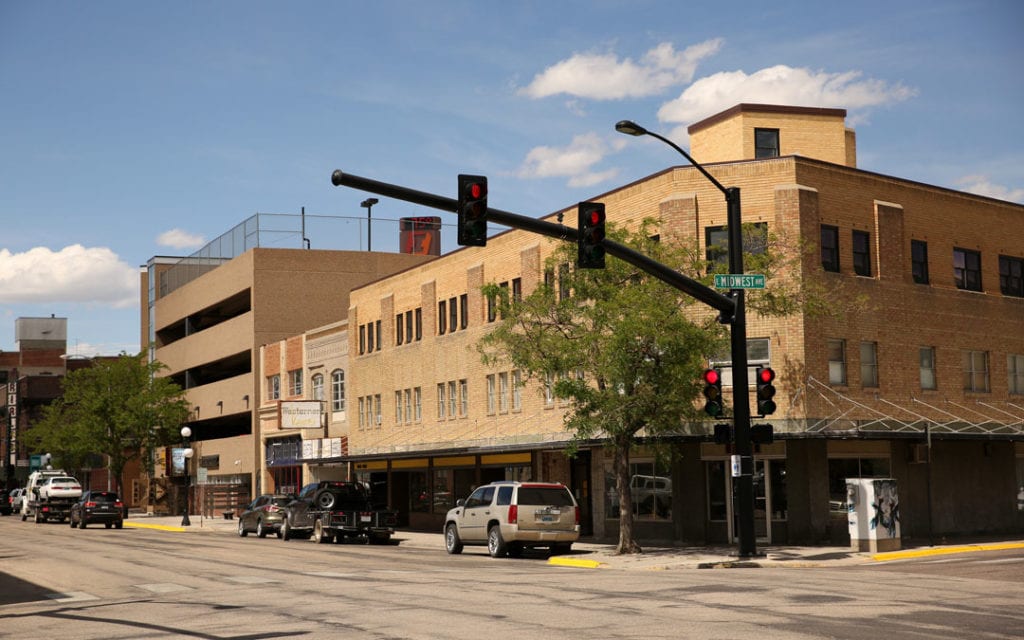 A brick office building sits on the corner of Midwest and Center St. in downtown Casper on Thursday, June 15. The building was constructed in the late 1940s and replaced the wood Natrona Hotel building. (Dan Cepeda, Oil City)

CASPER, Wyo. — The City of Casper is in the process of selecting a firm to manage the downtown parking garage on Wolcott and the parking lot at 106 South Center Street for the next four years.

The operation and management of these parking facilities is currently conducted by Casper’s Downtown Development Authority, but that contract is set to expire.

The DDA along with two Denver-based firms responded to the city’s request for proposals to take on management and operation of the downtown facilities starting Sept. 1. The firm that is selected will be contracted to manage the facilities through June 30, 2024.

The city council discussed the topic during their Tuesday, July 14 work session. Community Development Director Liz Becher explained to the council that a committee including herself, Vice Mayor Khrystyn Lutz, Finance Director Tom Pitlick and Buildings and Structutes Manager Matt Thomason evaluated the proposals and conducted interviews with the three candidates.

Denver-based Republic Parking scored the highest, followed by Denver-based Interstate Parking with the Casper DDA coming in third. Each was asked to provide operational plans which were to address:

Becher said that the committee “went into this process with wanting to have a fresh lense” on how the parking garage could best be utilized as an asset for the city. She added that the city have been interested in finding ways to get more people to use the parking garage so as not to take up limited parking on Casper’s downtown streets.

Republic Parking’s plan would involve paying the city a lease of $4,000 a year, which Becher said is comparable to the current agreement with the DDA. Republic had representatives visit both the parking garage and the Center Street lot which Becher says informed their revenue projections.

“Republic sees some lost revenue they believe they can capture,” Becher said. She added that the firm plans to join the Casper Area Chamber of Commerce if selected and are planning a big marketing push to increase use of the parking facilities.

Becher said that Republic also has a graphic artist on staff that would help create signage that would complement the Casper Area Metropolitan Organization’s “Wayfinding Plan” which aims to add signage around towns in Natrona County to highlight the community’s assets and attractive destinations.

She said that Republic projects $172,000 in revenues for the first year of management, which compares with $125,000 the DDA projected. Becher said that an aspect of Republic’s plan which “popped” for her was their profit sharing component.

Becher said that in the city’s current agreement with the DDA, there is a profit sharing component where the city would receive 10% of profits if the parking structure generates revenue beyond the DDA’s annual projections. She said that the parking facilities have not generated sufficient revenue to trigger the profit sharing mechanism for at least the last two years.

Republic’s profit sharing model proposing giving the city 30% of profits if net income exceeds a certain level. The firm also proposes that a Parking Advisory Board be formed that would focus on parking issues in Casper and communicate parking needs to the city council.

Becher said she reached out to staff at the City of Omaha, the City of Tacomo and the City of Cedar Rapids who also provided positive feedback of experience working with Republic Parking.

Becher said that Interstate Parking also had a strong interview. Compared with Republic, she said their operational plan would be heavily reliant on automation.

“Automation is a nice asset,” Becher said, but added, “I think our community is far more into [in-person] interaction with our citizens as well as our guests.”

She added that Interstate’s marketing plan was not as strong as Republic’s. Interstate also looked more at street parking as an asset, which Becher said didn’t align as closely with the city’s goal of emphasizing the parking garage as an asset.

Becher said that the City of Idaho Springs and the City of Duluth reported positive experiences partnering with Interstate Parking.

She said that the DDA was energetic in their interview and are “very, very interested in continuing to be a vital part of downtown.” The DDA also manage David Street Station and Becher noted that the parking garage is important to their ability “to host huge events.”

The DDA also work to encourage people to patronize downtown businesses and Becher said that the availability of parking is also important to those efforts.

Following the presentation, Councilman Ken Bates said that if Republic can deliver on everything Becher described, “that would be very beneficial to us and Casper.”

Councilman Charlie Powell asked whether the city’s capital improvement plans for the parking garage were incorporated into the candidate’s revenue projections.

Becher said that “Republic in particular has been studying our market area.” She said the candidates were all aware the city is working to add 22 additional security cameras in the garage and that both Republic and Interstate communicated those cameras would work well with license reading technology they would implement.

She added that the city have not yet moved forward on plan to issue a request for proposal to replace the ticket arms and access control. Becher explained that staff thought it best to wait until a parking firm is selected in case they offer their own technology that would make the upgrades redundant.

Becher said that Interstate Parking would rely on credit card paying and prepaying whereas Republic would still offer an option for people to pay in person.

Lutz said that an important question for her during the interviews was whether the firms offer mobile apps that allow people to find parking options online. She noted that both of the Denver based companies offer such options.

The vice mayor said she relies on such technology when she is traveling to other towns and thought it would be a valuable asset to offer people visiting Casper.

Councilman Steve Cathey said he thought it would be a good idea to have a firm specifically focused on the parking industry take over management in Casper. He asked whether the contract would include a cancellation clause in case the city was unhappy with the way the facilities were being managed before the contract expired.

Becher said that the contract had not yet been drafted, but that City Attorney John Henley was present at the work session and would make note of that type of feedback. She said a cancellation clause was part of the contract with the DDA.

“We should have an opt out in there,” Cathey said.

Councilman Mike Huber said that he has “a fairly strong prejudice in favor of dealing with local entities.” However, he said he agreed that the city should look to work with Republic based on the strength of what they say they can offer.

“Let’s move forward with this Republic outfit and see,” he said.

Becher said that the last time the city issued a request for proposals to manage the parking facilities, they didn’t receive bids from out of state.

“I was delighted that we were able to get some responses this time from out of state,” she said. “We have finally got some attention. They see a revenue potential.”

Becher added that Republic communicated that they see enforcement of street parking rules as important and would work closely with the Casper Police Department to ensure those rules are being enforced.

“That’s important too,” she said.