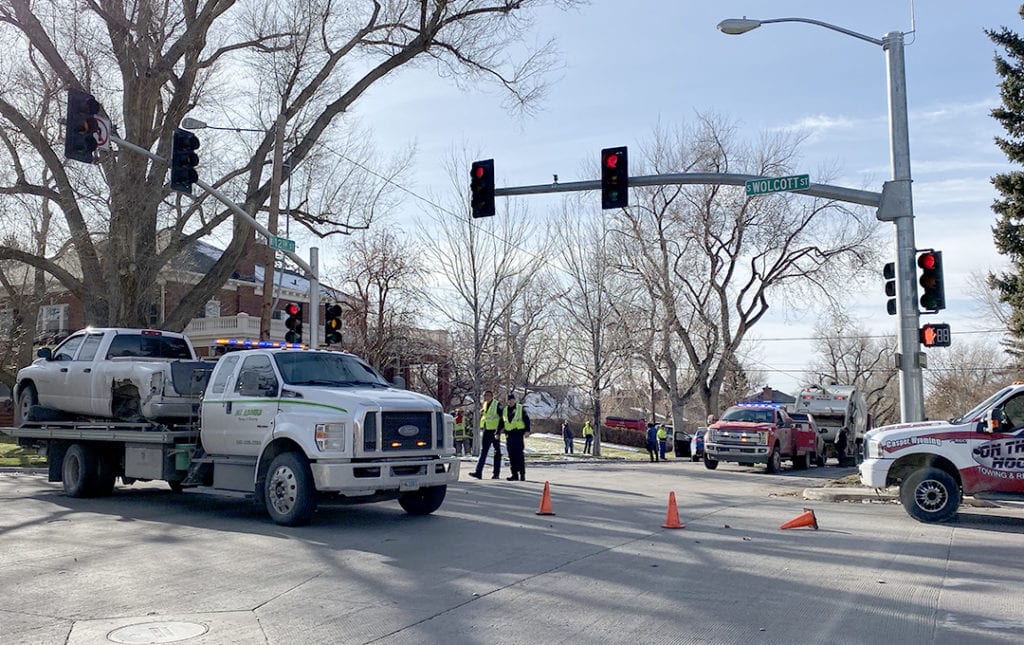 Vehicles are hauled away after a four-vehicle collision on 12th and Wolcott on Tuesday Nov. 12, 2019.(Dan Cepeda, Oil City)

CASPER, Wyo. — The Casper City Council have been discussing changes to parking rules and fees in recent weeks and appear to be steering toward an agreement.

Among the proposed changes is an increase to recreational vehicles (RV) parking permits. While city staff initially proposed raising RV parking permit fees from $25 to $500, Community Development Director Liz Becher said in March that citizen feedback indicated this may be too high. The permits allow people to park RVs on the street from May 1 to Nov. 1.

Council member Bruce Knell suggested during the March 9 work session setting the RV parking permit fee at $125. But when council again discussed the fees during their Tuesday, April 14 work session, Knell said he would be comfortable with staff’s $250 RV permit fee.

The proposed new rules would also establish a one-time $25 application fee for all parking permit types. The city is looking at reducing private handicapped parking space fees and temporary special needs parking permits from $300 to $50.

The council is also looking to allow a new pilot “parking on the parkway” program along 12th and 13th Street between CY Avenue and McKinley Street. The “parkway” is the often grassy space between the roadway and the sidewalk which is owned by the city.

Under Casper’s current rules, parking on parkways is prohibited but the city has not been enforcing these rules since 2017 at the direction of the city council.

The new pilot program would allow people to park on the parkways for a first-time fee of $250. Council said on Tuesday that rather than requiring a $250 annual renewal, they would like to set the renewal fee at $50 per year.

Council member Steve Cathey said that he thought $250 renewal fees would be too steep since people are required to pave the parkway area at their own expense (under supervision of city staff) to be eligible for the permits.

“$250 a year after they put everything else into it seems to be a bit much,” Cathey said.

While Knell said he likes the parking on the parkway concept as it would allow people to “enhance” the property, Council member Kyle Gramroth reminded the council that city staff don’t view modifications to the parkway as an enhancement.

Gamroth said he also had some hesitation about charging people $250 each year for the permits, but asked City Manager Carter Napier to remind the council what kind of time and costs the city would incur if there was such a program.

Napier said that he would be comfortable with the $50 annual renewal fees if the initial fee is set at $250. He said that city staff would need to monitor alterations to the city-owned parkways to make sure that construction is done appropriately.

Gamroth said that the council’s solution is not going to please everyone. He noted that city staff researched parking rules in some other cities and found that other cities don’t tend to allow any parking on the parkways.

Council member Khrystyn Lutz asked whether the city would start enforcing the prohibition against parking on the parkway (unless someone has a permit) if the council adopt the new parking rules and fees.

He said that the police department and code enforcement would both be in a position to address parkway parking and related issues. McPheeters said he thinks there is a good chance that people who park on the parkways without a permit may also have abandoned vehicles or problems with out of control weeds at their properties which code enforcement addresses.

Knell said that the parkway parking program would be a pilot program on 12th and 13th Street. He said the council is aware that there are other “skinny streets” where residents may desire to park on the parkways and that this could be a possibility in the future depending on the success of the pilot program.

The new parking rules would also include new fines for parking violations. Those are detailed in a memo in the council’s work packet as follows:

The council are expected to hold their first reading of the proposed parking ordinance on Tuesday, April 20.