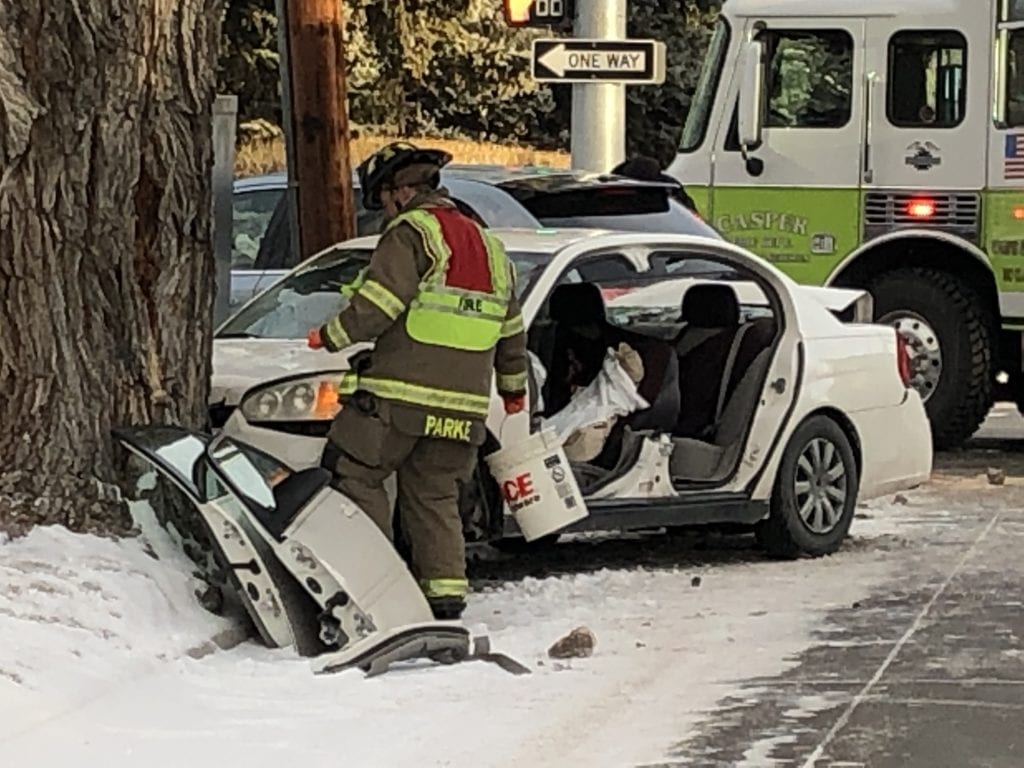 A crash at the corner of Wolcott and 12th near downtown Casper, slowed travel for morning commuters, Friday February 8th. A second unrelated crash happened a block away. (Oil City Staff)

CASPER, Wyo. — The Casper Police Department conducted a speed study of 12th and 13th Streets in September and found that in the two-week period that the study was done, 85% of drivers traveled at speeds of 31 mph.

While most drivers appear to be following speed limits on 12th and 13th Streets, 12 vehicles were found to be traveling in excess of 65 mph during the two-week period. The maximum speed captured during the study was of a vehicle traveling at 92 mph, according to a memo from Casper PD staff.

The study involved times when a speed trailer was and was not deployed and the study found no change in 85th-percentile speeds when the trailer was not present. Casper PD staff note that the speed trailer does not display speeds in excess of 50 mph in order to avoid a situation in which drivers are tempted to achieve “high scores.”

When the speed trailer was removed, officers were deployed in the area in high enforcement times and the memo notes that officers made few stops or citations. The study team had an overall consensus that there are other areas in Casper where speeding issues are worse.

“Examples of those areas include our High Visibility Enforcement area on CY between Wolf Creek and Wyoming Boulevard and our current DDACTS (Data-Driven Approaches to Crime and Traffic Safety) area on Second Street between Jackson and Beech,” the memo states.

Casper PD staff add in the memo that while there are some instances of people traveling well above the speed limit, they see those instances as “sporadic” and not occurring at times that are necessarily predictable.

Casper PD staff also reviewed instances of rollover crashes on 12th and 13th Street and found that significant causes have been driver impairment or failure to stop at stop signs and traffic lights.

The Casper City Council is set to discuss results of the speed study during its pre-meeting ahead of Tuesday’s regular city council meeting on Tuesday, November 16. The pre-meeting begins at 5:30 p.m. with the regular meeting scheduled to begin at 6 p.m.

Further information on the speed study can be found in the council’s work packet for the pre-meeting.