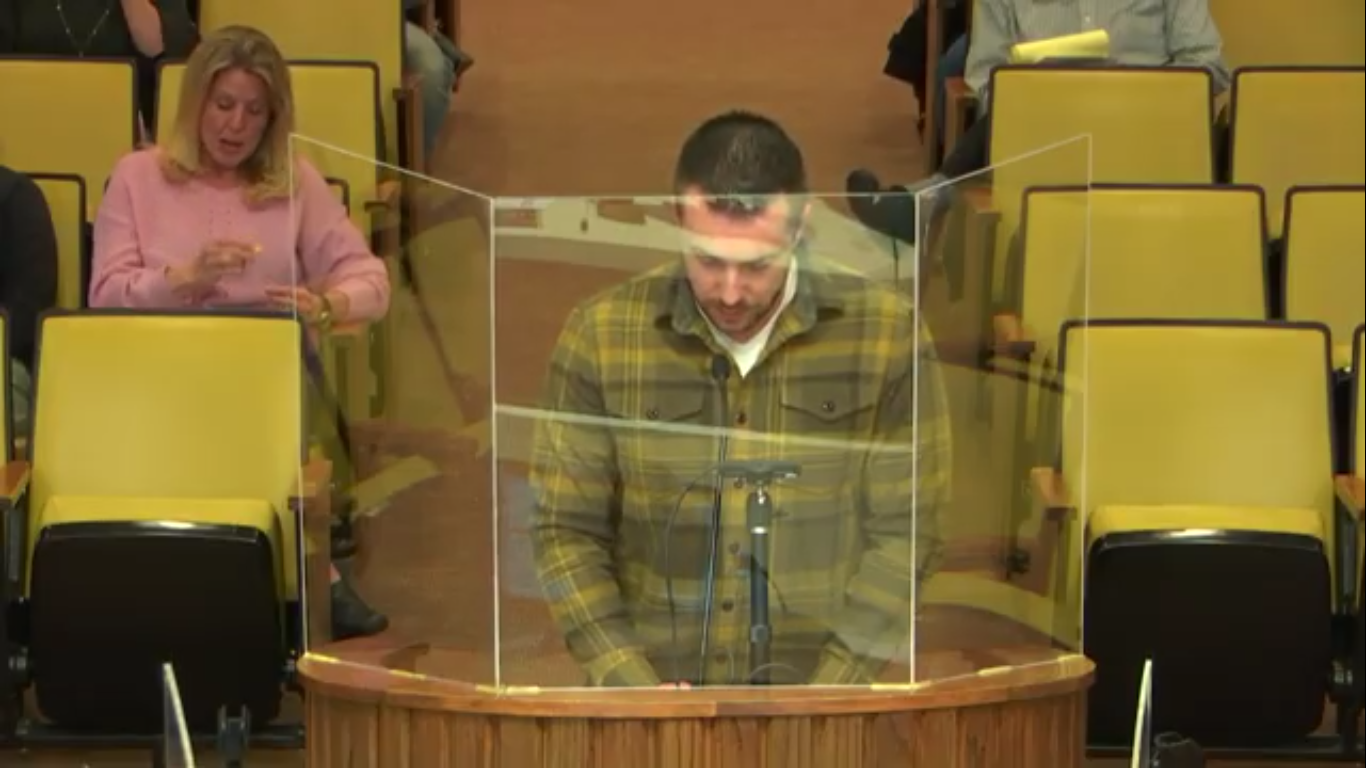 CASPER, Wyo. — The Casper City Council in April approved the transfer of a retail liquor license from the CY Discount Liquors & Backdoor Lounge location on CY Avenue to an area near the old Ridley’s building on the 1300 block of CY Avenue.

Businessman John Johnson told the city council during that meeting in April some of Johnson Restaurant Group’s plans for the former Ridley’s building.

“In this last year, a couple of opportunities have come before us and one of them is that we purchased the Ridley’s building on CY,” Johnson told the council. “We’re going to put a twenty-thousand square-foot ACE Hardware in [it]. We’re going to relocate Once Upon a Child; we don’t own that business, but the lady that does needs more space; and then we want to move CY Liquor and Backdoor Lounge into that location.”

While the city council has already approved the liquor license transfer, multiple parents of students at St Anthony Tri-Parish Catholic School and Preschool expressed concerned during the Tuesday, November 16 city council meeting about a bar and liquor store moving into a location across the street from the school.

Several of the parents who spoke said they had only become aware in the last several weeks that CY Discount Liquor would be moving into the new location.

Pete Maxwell spoke as a “concerned parent,” board member at St. Anthony’s, and co-owner of the Gaslight Lounge, stating that as a liquor license holder, he understands the time, effort and financial investment of projects like what the Johnson Restaurant Group is undertaking.

On the other hand, he said that he also learned the hard way the importance of reaching out to neighbors and schools when seeking a liquor license. Maxwell said that when he sought a liquor license from the city in 2016 that was eventually awarded to the Yellowstone Garage, he asked council members at the time why his proposal had not been chosen. Maxwell said that council members told him that his having not reached out to the Montessori School of Casper was a factor.

Maxwell and the Gaslight were eventually able to secure a different retail liquor license, but that one was at full cost rather than the license that was awarded to the Yellowstone Garage. Maxwell said that prior to getting the liquor license for Gaslight, he spoke with Montessori to hear their concerns about the bar.

Maxwell said that as a concerned parent, he is worried about CY Discount Liquors planning to open at 6 a.m. daily alongside the proximity of the bar to the school.

“With kids coming and going each day within feet of this establishment, it makes me very concerned,” Maxwell said.

He added that he understands it may be too late to do something about the situation but said that he thinks the Johnson Restaurant Group should have reached out to St. Anthony’s to talk about their plans in advance.

Council member Bruce Knell told Maxwell that he has spent time at the new CY Discount Liquors site earlier on Tuesday and spoken with Johnson about concerns people have expressed. He said that Johnson had showed him that most patrons will park in front of the building rather than in a lot behind the building that is closer to the school. Knell said that Johnson communicated that the parking lot in back would mainly be used by employees rather than patrons. Knell also said that Johnson committed, at Knell’s suggestion, to having a fence constructed in back to add a barrier between the bar and the school and houses behind the building.

“As far as loitering, drinking, drunks outside, I just don’t think that is going to be an issue,” Knell told Maxwell. “With 99% of their traffic coming in and out of the front door, I don’t think the school will ever even notice it.”

Knell said that he also lives in the neighborhood. He added that Johnson seemed willing to take suggestions on how to allay concerns of people in the area.

Elizabeth Grill then spoke, saying that she is a parent of two children at the school. She noted that there are other schools in Casper that are in proximity to bars but that the access between schools and bars in other areas is more distinct than it will be between St. Anthony’s and CY Discount Liquors.

She also said that St. Anthony’s may be different from other schools in terms of a higher amount of traffic since parents pick up their students rather than students being transported on buses. Grill said that some of her concerns were eased when looking at the way CY Discount Liquors will be accessed, saying that it doesn’t appear traffic leaving the liquor store and bar will come out right in front of the school.

Grill said that she thinks the council may want to consider changes to its zoning ordinances, noting that there is not a requirement under general commercial zoning for liquor stores to be set back from schools. She said that since the city’s ordinances do have rules requiring gambling establishments be at least 300 feet away from schools, the city may want to consider making some kind of similar rule for bars.

Council member Kyle Gamroth said that council members have asked city staff to put together information about Casper’s ordinances so that the council can consider whether changes along these lines are needed.

Parent Jody Olson said that he is a patron of CY Discount Liquors but doesn’t think that it is appropriate to have it located next to the school.

“Obviously, we’re not supposed to drink and drive but it happens,” he said. “It is like we are creating an atmosphere for trouble.”

Olson said he thinks it is inevitable that some type of problem will arise from having the school located in close proximity to the bar: “It is not if it is going to happen, it is when.”

Knell said that he thinks that CY Discount Liquors “is not going to look like a neighborhood bar. … It is too classy; it is too nice.” On the other hand, he said he understands Olson’s concerns and added, “I pray to God what you are saying never happens.”

Henry Groenenberg spoke on behalf of John Johnson and the Johnson Restaurant Group and said that they take the concerns of parents seriously.

He said that he thinks some of the concerns relate to the bar, including the name “The Backdoor Lounge,” noting that this is a name that came about from the old location and that the name shouldn’t be taken to imply that people can only get in through the door in back.

Groenenberg added that Johnson envisions the new location as something akin to Vintage, the bar attached to Poplar Wine & Spirits. He said that the establishment will serve alcohol but food will also be available. While the bar will open at 6 a.m., Groenenberg said that the people who come in at that time tend to be people getting off of a night shift and that it isn’t really different for them to go to a bar at that time than it is for someone to go to a bar after getting off work in the evening.

He also said that the bar will offer a casual social environment: “It is not scheduled to be a rowdy bar.”

Parent Suzette Fresquez said she had concerns about people drinking during the day and subsequently wandering streets near the school while kids may be at recess. She said that children might be exposed to vulgar language or other behaviors that parents don’t want their kids to be exposed to.

Council member Steve Cathey asked Fresquez whether she takes her children to Walmart or to downtown Casper. He said that children may be exposed to homeless people or “drunks” in these areas and said that they might hear cursing or violent acts in those situations as well. He suggested that he thinks it is unfair to expect the Johnson Restaurant Group to ensure kids aren’t exposed to such behaviors if parents take their children to other areas where they would be exposed to such behaviors.

Fresquez responded that she thinks schools are meant to be places where parents can be confident of their children’s safety. She said that if problems do arise at the bar, “our kids’ safe place is no longer a safe place and that’s my concern.”

Vice Mayor Ray Pacheco asked City Manager Carter Napier what type of communication the city had engaged in to notify people that the bar and liquor store would be coming to the area.

Napier said that the city published legal notices and information in its own website of the transfer of the liquor license. As no zoning change was needed to allow the liquor license transfer to occur, Napier said that there were less notification requirements than if there had been a zoning change or a gambling establishment moving into the location.

He said that the city received some communication from the school in April asking for some information about the transfer and that responses to those questions were provided. Napier said he has also had phone conversations with people concerned about the situation.

Pacheco asked whether changing Casper’s ordinances would have an effect on CY Discount Liquors’s ability to move into the new location. Napier said that he did not think the council would have the “retroactive authority” to require businesses to relocate that already have licenses under current ordinances.

Pacheco said that he understands that parents are concerned and thinks the council should have further conversation about what, if anything, can be done to help address those concerns.

“This isn’t going away; this establishment is going to be there,” he said.

Pacheco said he isn’t sure what can be done to alleviate the concerns of parents but said that he thinks conversation between the parties involved rather than butting heads is the key.

Knell said that he thinks that if problems arise when the bar opens and parents bring complaints, the city and council members will take those complaints seriously.

He told the parents that he thinks they need to be realistic about the world having danger in it but to not live in fear.

“You could walk out these doors tonight and somebody could run you over,” Knell told them after pointing out that he has a PhD in divinity.

Knell said that he thinks there are a lot of schools in Casper that are in proximity to bars and that the council rarely hears complaints about problems arising from those situations. He pointed specifically to Natrona County High School and its proximity to bars in the downtown area.