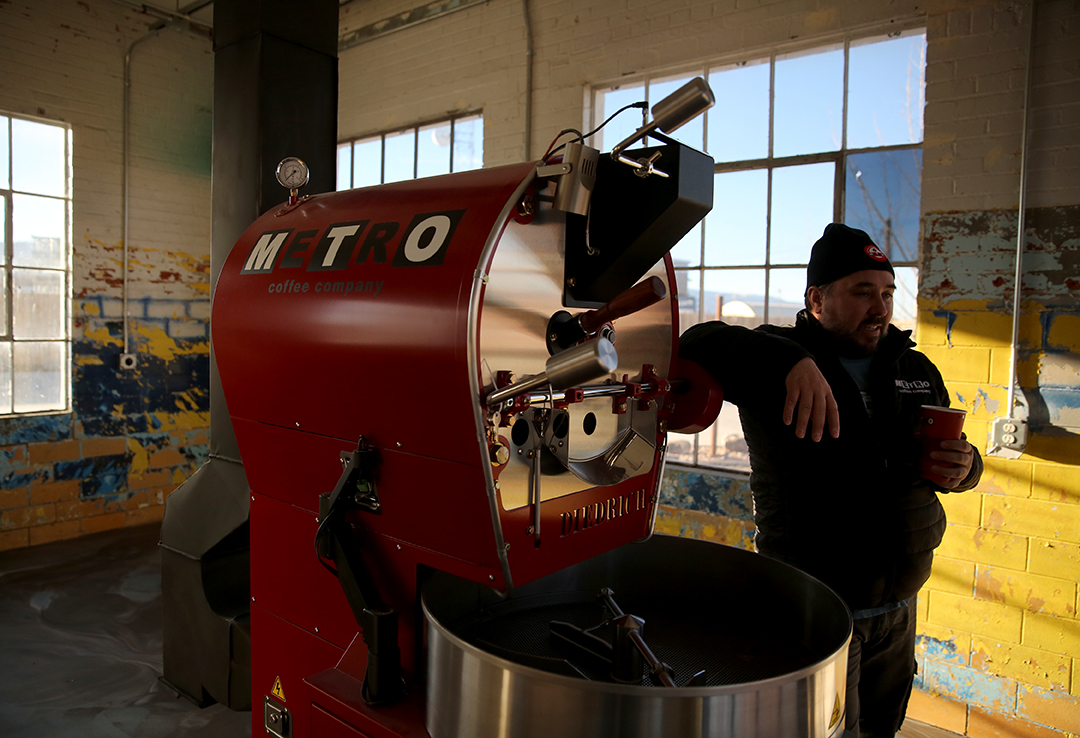 Metro Coffee Company co-owner Sean Peverley stands next to the new coffee roaster that has been installed in the historic Skelly Service Station building in the Old Yellowstone District. The building will become Metro’s third location, and first to include a roaster. (Dan Cepeda, Oil City)

CASPER, Wyo. — Metro Coffee Co. Co-Owner Sean Peverley didn’t originally have expansion of his business in mind when he took over the downtown location on David Street in 2017.

However, the necessity to grow the brand has become more apparent for Peverley as time has gone along, making it a major factor in why Metro is opening a new location for the second time in roughly a year and the coffee spot’s third in Casper.

Placed on the corner of South Elm Street and West Yellowstone Highway inside the former home of 1890 Craft Apparel will be the scene of Metro’s new roasting station and drive-thru location, a venue that Peverley hopes to get fully remodeled and running sometime in January. A former car service station, the many open windows along the building will give patrons a constant open look inside the daily operations of one of the city’s most popular coffee shops.

With a hulking red and Metro-emblazoned roaster inside that can roast 80 pounds of coffee beans an hour, it’ll be another major step forward for the business after its east-side location on Centennial Hills Boulevard opened doors late last year. The excitement of the idea that Metro could do more, plus creeping toward customer peaks at the original location, greatly influenced Peverley’s choice to broaden Metro’s horizons.

“In 2020, I knew that we were going to start roasting somewhere, somehow,” Peverley said, “and so the thought of this building being available, I’ve always just known that it is available. And I know people want to be using this building for something … coincidentally, when we went and talked to [building owner] John Huff and his wife through the Yellowstone Garage, we talked about having a roastery and they were excited about that. They wanted some sort of coffee in this building.”

Peverley said that Huff had mentioned that he originally thought his family would be the ones to install a coffee shop in the building, but when Peverley said Metro could come along and install the roastery, details got sorted rather quickly.

As the roastery site gets going, Peverley noted that Metro is largely going to be sticking at first to its baseline blends there like medium roasts and espressos, but the origins of the beans will shift over time as the patrons grow and their palates demand new flavor profiles.

“At some point, I’ll buy something different,” Peverley said. “We’ll have an Ethiopian coffee for a minute, we’ll have a Mexican coffee. And those opportunities will come up simply [and] easily as we get a customer base, you know? So yeah, we’ll have an opportunity to build on what we are currently going to start with.”

Though not from Casper originally, Peverley said he’s fallen in love with the city and has enjoyed helping to expand the downtown area through Metro. And even at the helm of a brand that’s been around the city for nearly two decades with a trio of locations, Peverley wants the small-scale feel of Metro to stay.

“I love working with the community, I love being a part of the community,” Peverley said. “I think that Casper, you know, it’s a place I’ve fallen in love with. … I love downtown, the way that downtown is growing, and just coincidentally I’ve been a part of that. I’m going to help build it even more now. And I think that’s a big part of who we are.”