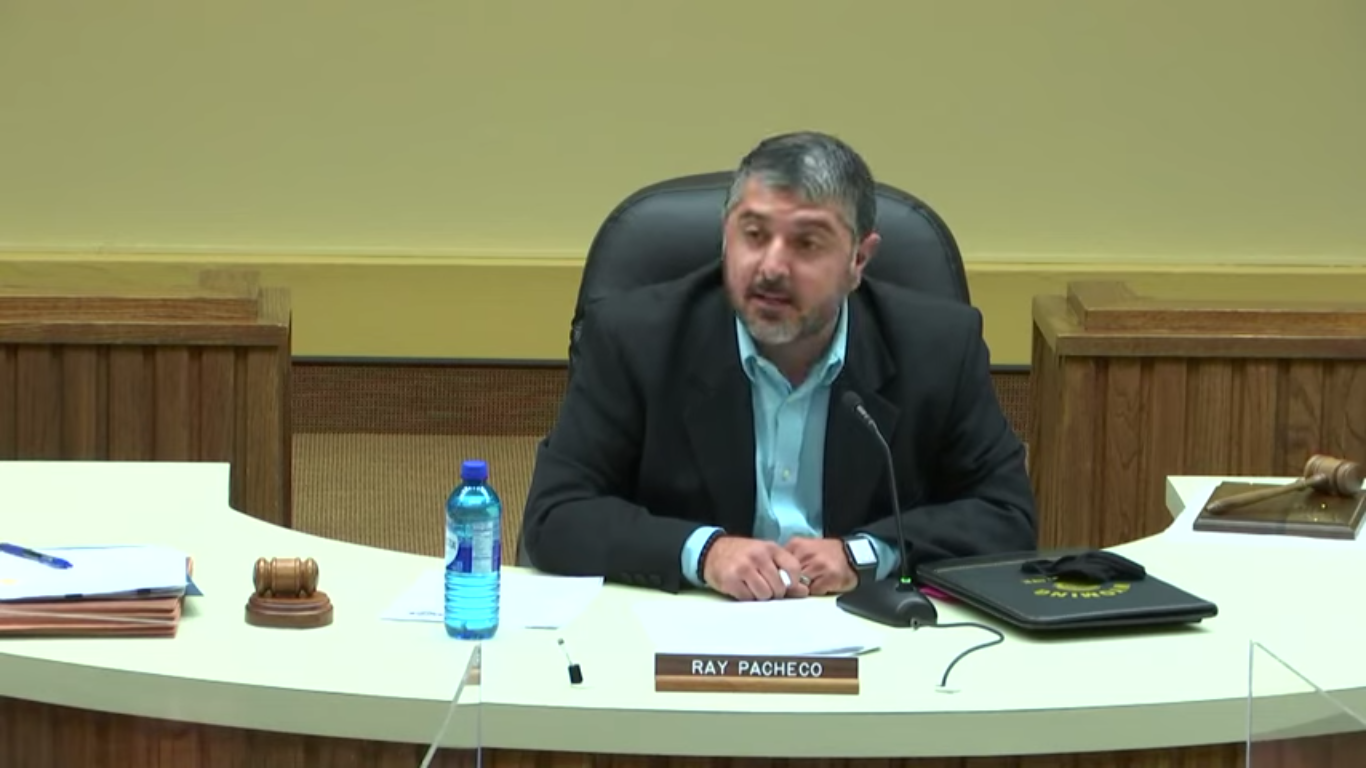 Casper Mayor Ray Pacheco after being sworn-in on Tuesday, January 4, 2022. (Screenshot via City of Casper, YouTube)

CASPER, Wyo. — Casper City Council member Ray Pacheco was sworn in as mayor during the council’s first meeting of 2022, returning to the leadership position after previously serving as mayor in 2018.

After being sworn in as mayor on Tuesday, January 4, Pacheco thanked fellow Council member Steve Freel for the leadership he provided as mayor. Freel found himself in the mayor’s seat when the COVID-19 pandemic arrived in Casper and served in that role throughout 2020 and 2021 before moving into the position of vice mayor on Tuesday.

“I wanted to thank him for his friendship, for his dedication and his tireless leadership and steadfastness in the last two years leading this council,” Pacheco said of Freel. “It cannot be overstated that the vice mayor in his two terms as mayor led this council and our community during the most difficult times in recent memory. We are grateful — I am grateful — for your leadership.”

Pacheco said that he fully expects there to be challenges for the city during 2022.

“We will face challenges in maintaining and funding our city infrastructure like our streets, City Hall, the Ford Wyoming Center, Hogadon, the water treatment plant, and the list goes on,” Pacheco said. “With state funding becoming less and less reliable, we will need to find unique and innovative ways to fund these necessary city properties.”

In addition to finding ways to fund infrastructure-related projects, Pacheco said he sees city employee compensation as a priority for the council to address.

“Most importantly, we will need to find ways to continue to support our city employees,” he said. “While we addressed pay freezes and stagnant wages, we need to make sure that all city employees are compensated fairly and justly.”

To begin the new year, the city implemented 5% raises to full-time employees and police officers that had had their wages frozen in place since summer 2020. While wages have been unfrozen, Pacheco said he thinks the council should find further ways to improve compensation for employees.

“In the coming budget year, finding funding for cost of living adjustments and broader pay raises for our employees should be and must be a priority for this council,” he said.

After pointing to infrastructure funding and employee compensation as some of the issues he sees facing Casper in the year ahead, Pacheco said after the meeting on Tuesday that the state’s revenue picture is a backdrop for the challenges facing the city.

“Obviously, we know that state funding is tight,” Pacheco said. “It’s been that way two, three years now, and I just don’t know and see a way out of that at this point without certain hard decisions.”

“I don’t think we can cut our way out of it, obviously, from the state level but with that being said that also trickles down to to all the cities, to the municipalities.”

Pacheco said that he thinks it is important to have conversation with state legislators representing the Casper and Natrona County area and ask how they are fighting for the local community.

From Pacheco’s perspective, Casper is going to need to be innovative in order to find ways to address things like infrastructure funding challenges.

Funding, or the lack thereof, for streets projects is one example of infrastructure challenges facing Casper. Only 4% of roads in Casper are considered in “excellent” condition and 13.5% of Casper roads are “backlogged,” meaning they are poor or very poor, according to a report prepared by Infrastructure Management Services. That study found the city should be spending about $3.5 million more per year than it currently does on street maintenance projects.

Other infrastructure needs the city council discussed in 2021 include multi-million dollar upgrades needed at the wastewater treatment plant and a roughly $40 million backlog in stormwater system repairs. The city has also been exploring how to find funding for a new Casper Police Department headquarters that could cost in the neighborhood of $40 million. Completely addressing aging building infrastructure could require $50 million or more. Overall, city staff pointed to $178 million in pressing infrastructure needs as the council discussed in February 2021.

To address some infrastructure facing Casper as well as Midwest and Evansville, Natrona County voters were asked to consider a special purpose “sixth cent” sales and use tax in November 2021. Voters defeated the proposed tax that would have been used to raise roughly $4.4 million needed for a pair of infrastructure projects.

One was the repair of a roughly seven-mile stretch of pipeline that brings drinking water to Edgerton and Midwest, which town officials said is currently succumbing to corrosion issues. The other was to complete the renovation of Midwest Avenue in downtown Casper from Walnut to Poplar Street, which is expected to be major thoroughfare when the new state office’s building opens on Collins.

Pacheco said that with the sixth cent failing, Casper is going to have to find other ways to fund the completion of the renovation of Midwest Avenue.

“We do know from conversations that we’re going to have to make some cuts other places,” Pacheco said. “[City Manager Carter Napier] has made that abundantly clear if we need to do those things. It’s not even just Midwest but we have a multitude of other streets and I’m just talking streets.”

“So when I was talking about that in my remarks about infrastructure, our work is going to be cut out for us in the coming year. And so I don’t have an answer yet.”

Pacheco said he expects that Napier will propose a tight budget for the city when it comes time to create a new budget this spring and that he expects some of the infrastructure needs facing the city are likely to remain on the back burner.

Pacheco said he understands that state legislators also face a difficult task when it comes to figuring out how to address pressing needs in the state and that he doesn’t envy the position they are in.

“But the fact of the matter is that if you don’t have revenue coming in, what are our options?” he asked. “What decisions are they going to have to make to create revenue?”

In his comments during Tuesday’s council meeting, Pacheco said he thinks the city council can provide leadership during what he sees as a critical moment for the United States.

“I’ve also come to a greater and a deeper understanding of leadership these last seven years,” Pacheco said. “Leadership is not always being right. Being a real leader means listening, listening and listening, and fully understanding other people’s perspectives even when you whole-heartedly disagree.”

“You see, we’ve come to a watershed moment in this country and it is a turning point that needs to start with this council where we must lead with courage, knowing that we won’t always agree and when we do disagree we can walk away from this dais seeing each other with dignity and respect. This coming year, I challenge this council to find ways to be examples of that courage, to recognize the humanity in others, to lead with compassion, understanding and hope. There are many young people in this chamber tonight. My sincere hope is that we can set examples for these young people of how government can work together for the betterment of this great community.”

For his part, Freel said after being sworn in as vice mayor that he appreciated the support he received from former Vice Mayor Khrystyn Lutz and from Pacheco during his two years as mayor. Freel said he has also appreciated the level of research and thoughtfulness the members of the city council have contributed.

The mayor and vice mayor in Casper are selected from among members of the city council by vote of members of the city council. Pacheco and Freel were provisionally elected by their peers for the leadership positions during the council’s straw poll vote in November 2020. The council confirmed the results of the straw poll vote in a formal vote during Tuesday’s meeting.

In Casper, the mayor has the responsibility to lead city council meetings and issue proclamations on behalf of the city but has no more formal power than other council members. The mayor in Casper has some symbolic power and is asked to attend and speak at community events.

In Cheyenne, by comparison, the mayor is elected by the voters and serves as the city’s chief executive. There, the mayor has the authority to sign ordinances into law, appoint department directors and oversee the day-to-day operations of the city, as BallotPedia explains. The mayor in Cheyenne also has the power to veto city council actions.

In Casper, the mayor has none of the above specific powers. Under the “Council-Manager” system of government, the city council as a whole shares oversight of general administration and policy and also has the authority collectively to set a budget. The city council also has the authority to appoint a city manager to carry out daily administration of the city. In Casper, the city manager is Carter Napier.

The nine members of the Casper City Council include: