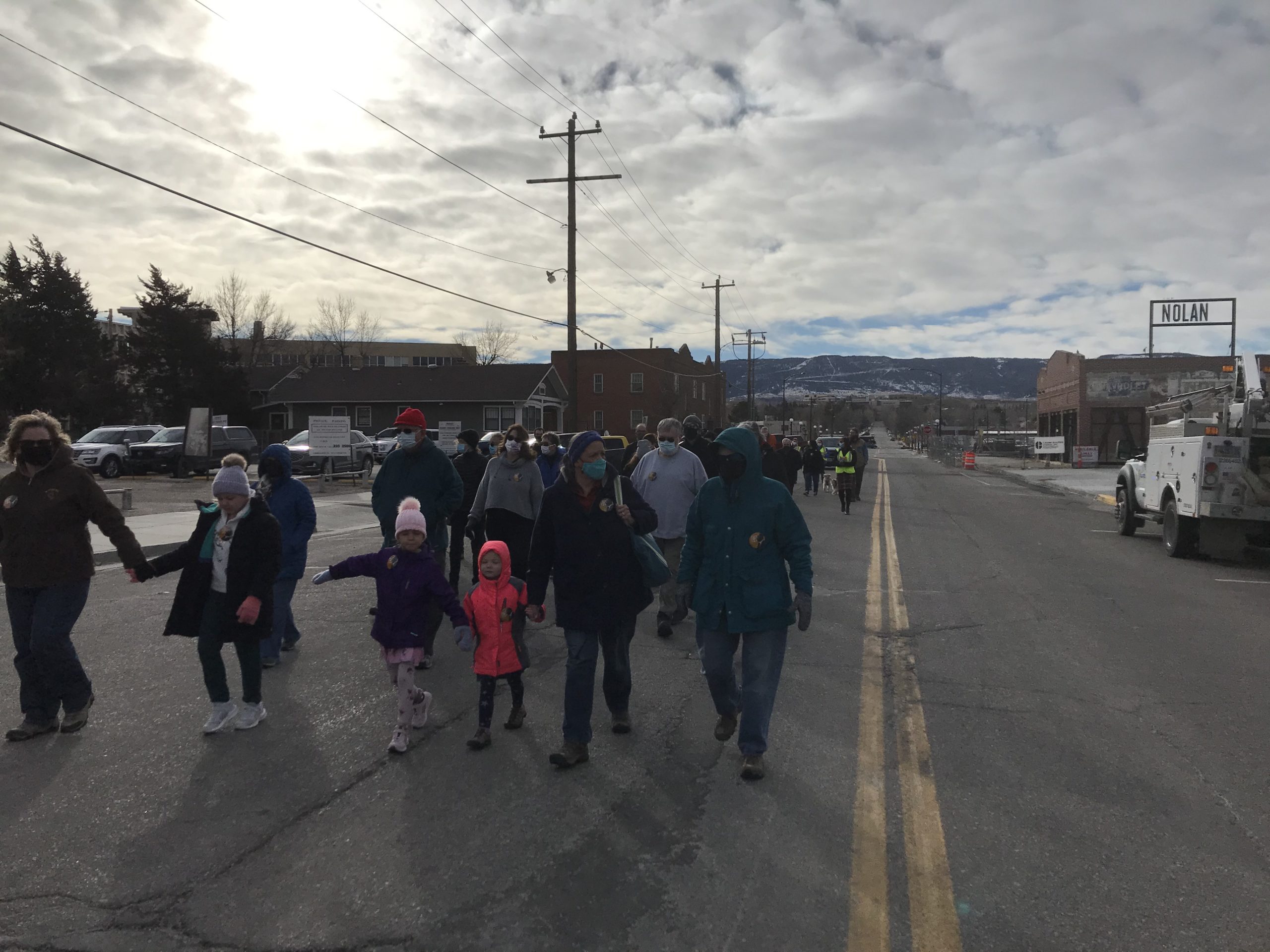 CASPER, Wyo. — Monday marked Martin Luther King Jr. Day, which is a federal holiday designated as a day of service.

In Casper, people gathered at ART 321 in the morning for an MLK Day march that made its way through downtown Casper to the First United Methodist Church Casper. There, community leaders spoke about the legacy of Dr. Martin Luther King Jr. and about the need for service they see in the community today.

“We gather here this morning in the presence of something greater than ourselves and as we gather here today, we remember the conviction of Martin Luther King Jr. that freedom is never voluntarily given by the oppressor, but demanded by the oppressed,” Boswell said. “Therefore, we pray for courage and determination by those who are oppressed.”

Boswell’s prayer recalled other words of King speaking on the issue of justice.

“Injustice anywhere is a threat to justice everywhere,” Boswell said, citing King’s words in a letter he wrote in a Birmingham, Alabama jail in 1963. “We are caught in an inescapable network of mutuality, tied in a single garment of destiny. Whatever affects one directly, affects all indirectly.”

“We remember Dr. King’s hope that ‘the dark clouds of racial prejudice will soon pass away and the deep fog of misunderstanding will be lifted from our fear-drenched communities and [that] in some not-too-distant tomorrow the radiant stars of love and brotherhood will shine over our great nation with all their scintillating beauty.”

After Boswell’s prayer, Casper Mayor Ray Pacheco addressed those in attendance, calling on the community to find courage in difficult times.

“Maya Angelou once said, ‘Be certain that you do not die without having done something wonderful for humanity,'” Pacheco began. “It’s easy to speak words to make change in our community. It’s the action that takes courage.”

“We live in an unprecedented time. A time of political tribalism. A time where we stand separated by our beliefs.”

“One small thing that we can do: taking the courage to stand alone at times,” Pacheco said.

Pacheco called on young people in particular to work to make a difference in the community.

“To the young people here today, you have to be the one to make the difference,” the mayor said. “As adults we have failed. But the whole lies in your hands. I challenge our young people to stand in courage to make a difference.”

“My hope and my prayer is that you can make a difference.”

Following his speech, Pacheco led those in attendance in a pledge of nonviolence in honor of MLK Jr. That pledge read as follows:

In honor of Dr. Martin Luther King, Jr.’s life and work, I pledge to do everything that I can to make America and the world a place where equality and justice, freedom and peace will grow and flourish.

I pledge to make nonviolence a way of life in my dealings with all people.

I will reject all forms of hatred, bigotry and prejudice and I will embrace the values of unconditional, universal love, truthfulness, courage, compassion and dedication that empowered Dr. King.

I will dedicate my life to creating the beloved community of Dr. King’s dream, where all people can live together as sisters and brothers.

The community also watched a trailer for a new “Casper Freedom Trail” video that is part of a project spearheaded by ServeWyoming, exploring Casper Black history.

Luck also said that ServeWyoming is supporting Project Homeless Connect Natrona County and asked people to contribute to those efforts.

Luck told Oil City on Monday that ServeWyoming is encouraging people to volunteer in churches and nonprofit organizations throughout the community.

“We have a lot of nonprofit partners that need some extra help, especially right now,” Luck said. “We encourage everyone to go to our website, which is ServeWyoming.org, click on volunteer and find a way to be of service today.”