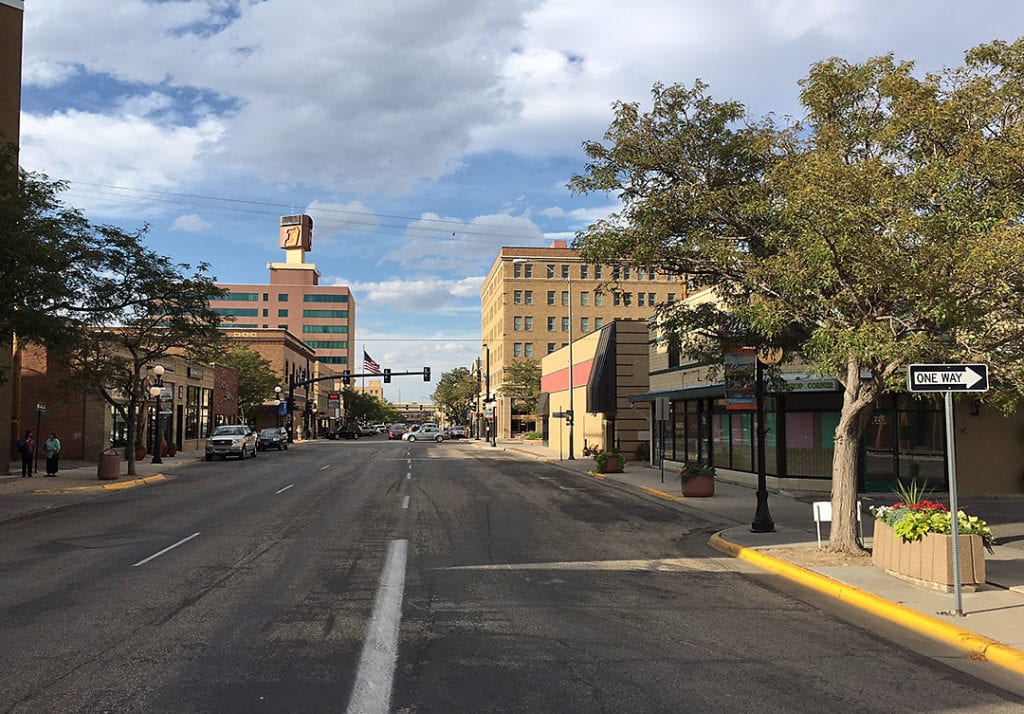 CASPER, Wyo. — The Casper City Council discussed whether to move forward on converting downtown one-way streets back to two-ways during its Tuesday, March 8 work session.

Converting Durbin and Wolcott to two-way streets is a concept that Casper Area Metroplitan Planning Organization Supervisor Jeremy Yates said has been recommended by multiple reports over the last 30 years. The idea has again been recommended in a study recently completed by consultants hired by the Casper Area MPO. (The full study is available in the city council’s work packet.)

The city council could choose to have the project completed in phases to reduce up-front costs or could choose to do the project in one fell swoop. Members of council that spoke during Tuesday’s work session all said that they see some need for converting Durbin and Wolcott to two-way streets, but opinions differed on whether the project should be made a priority or whether it should take a backseat to other projects.

City Manager Carter Napier said that if the city council does want to move forward on the project, he would want to look into whether American Rescue Plan Act funds can be used for it. If not, the city would likely use money from its Capital Reserves Fund, an account that collects funding when projects are completed with surplus dollars remaining.

That fund has about $3.5 million in it, according to Napier. However, the city’s proposed $36.3 million capital spending plan for Fiscal Year 2023 would use about $1.43 million of Capital Reserves. Adding the $750,000 downtown street conversion project would decrease that fund total to around $2.3 million. Napier said that the Capital Reserves fund has historically been as high as the $10–12 million range.

Council members Steve Cathey and Kyle Gamroth both raised questions about relying on this funding. Gamroth said he would like to see the city first seek grant funding that might be available to help pay for the conversion, particularly if the project involves adding bicycle lanes or other features to improve pedestrian travel in the area.

Cathey said he was cautious to use the Capital Reserves due to concerns over inflation and how it could impact various project costs in Casper. The city council also discussed the proposed $36.3 million capital plan on Tuesday, and Napier said that the vast majority of that funding proposal is cash that the city already has on hand. However, cost estimates for the 157 projects the city is proposing for FY 2023 don’t necessarily rigorously account for inflation, according to Napier. Inflation reached a 40-year high of 7.5% in January 2022, according to MarketWatch.

Cathey said that with inflation likely to lead to higher costs for Casper’s proposed projects, he would prefer to keep the Capital Reserves funding available in order to help ensure various projects are able to move forward.

“I would hate to take $750,000 out of that fund,” Cathey said, referring to the estimated cost of the one-way streets conversion project.

Cathey added that he agreed with Gamroth that the city should first look to see whether American Rescue Plan Act funds or other grant money might be able to pay for the one-way streets’ conversion. Gamroth said that he would also like to hear what other projects city staff might recommend for use of the Capital Reserves fund instead of the one-way conversion to help the council make decisions about how much of a priority it should be.

Knell, on the other hand, said that he thinks the Capital Reserves fund should be used for the one-way streets conversion project.

“Unless I’m wrong, that’s not a savings account,” he said. “It is a slush fund for when we are saving money on other projects that that money just gets diverted into.”

Napier said that while the term “slush fund” gives city finance staff some anxiety, there is no policy in place requiring the city maintain some minimum balance in the Capital Reserves Fund. Most other city funds do have sideboards limiting how they can be used. Napier said that the Capital Reserves Fund is typically used to help ensure capital flow for projects and to help the city leverage grants.

“It is meant to do capital,” Napier said.

Earlier during the work session, Knell argued that the city should make the one-way street conversion happen sooner rather than later as inflation is likely to push the cost further north of $750,000 the longer the city waits and he doesn’t want to kick that can down the road.

Gamroth said that he thinks that there are a host of projects that would be good for the city, but that there simply isn’t enough funding to make them all happen at once. Therefore, he characterized one role of the city council as prioritizing which cans can be kicked down the road versus what needs to happen sooner.

Council member Lisa Engebretsen said that she was not sure the one-way streets conversion should be a top priority, though she thinks “it is needed at some point in time.”

Pacheco said that he thinks the city should move forward on the project and avoid further ballooning costs due to inflation, with these comments coming early in the discussion on Tuesday. After the council’s full discussion, the council asked that city staff further explore whether grant funding may be available for the project before making any final decision about whether to fund the one-way conversion project in the near-term.