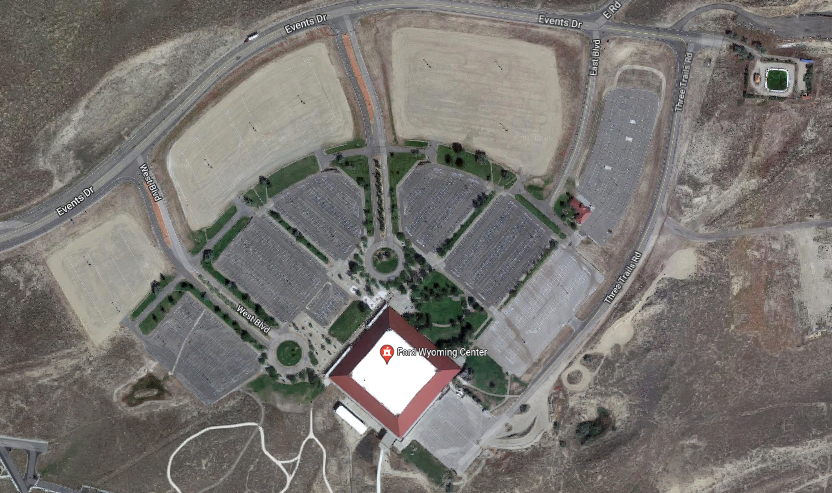 The proposed new indoor sports facility would be constructed on what is now a dirt parking lot located to the northeast of the Ford Wyoming Center. (Screenshot via Google Maps)

CASPER, Wyo. — The Casper City Council on Tuesday gave a preliminary nod toward what could become a new indoor sports facility near the Ford Wyoming Center.

Casper City Manager Carter Napier initially informed the city council in January that that the city had been approached by a group interested in constructing the new indoor sports facility. Napier said during the council’s Tuesday, April 5 pre-meeting work session that a nonprofit organization is behind the proposal and it’s hoping to lease a dirt parking lot from the city located to the northeast of the Ford Wyoming Center for the construction of the facility.

Napier said that the city would retain ownership of the land under the proposed agreement and would lease it to the nonprofit. The city manager added that there is the potential that the construction of the indoor sports facility might lead to more development in the area. Visit Casper CEO and Natrona County Commissioner Brook Kaufman told the council in December 2021 that the Ford Wyoming Center could potentially be expanded into a campus of facilities and that such an expansion might make it more feasible to host tournaments in Casper.

Attorney Tassma Powers, who is a member of Advance Casper’s Board of Directors and represents McMurry Group/ Refined Properties, attended the pre-meeting work session on Tuesday and said that a nonprofit is being formed that would facilitate and fund construction of the sports facility. The specific name of the nonprofit was not shared during the discussion Tuesday.

Powers said that the same consulting group that was hired when there was discussion about the possibility of building an indoor sports facility at the Platte River Commons has been hired for the proposed facility that would be built near the Ford Wyoming Center. Strategic Financial Associates, LLC conducted a feasibility study for the Amoco Reuse Agreement Joint Powers Board regarding the possibility of constructing such a facility at the Platte River Commons in 2019, but the plans never materialized.

Powers told the council that if the new sports facility envisioned for the Ford Wyoming Center area moves forward, the nonprofit organization would not itself directly manage operations of the new facility, but would rather issue a request for proposals from a third party to do so. She added that the goal is to have construction begin in 2022, with about a 12-month construction timeline.

The facility would primarily focus on court sports and would include three basketball courts and six volleyball courts, according to information included in the city council’s pre-meeting work session work packet that also shows some preliminary designs. The facility might also be able to offer artificial turf that could be used on an as-needed basis.

Murphy said that the Ford Wyoming Center’s “traffic flow right now is not very good” and that the facility’s parking master plan would need to be reviewed if the proposed new sports facility project moves forward.

Napier said that while parking for CNFR is important, he didn’t think that alone should be a sticking point that would prevent the proposed sports facility from moving forward. He noted that the city owns other land in the area and that other options could be explored to address parking issues.

The council gave a nod to city staff moving forward with working out leasing agreements that could allow the project to advance. Such agreements would need to be formally approved by the city council by vote during a regular meeting.