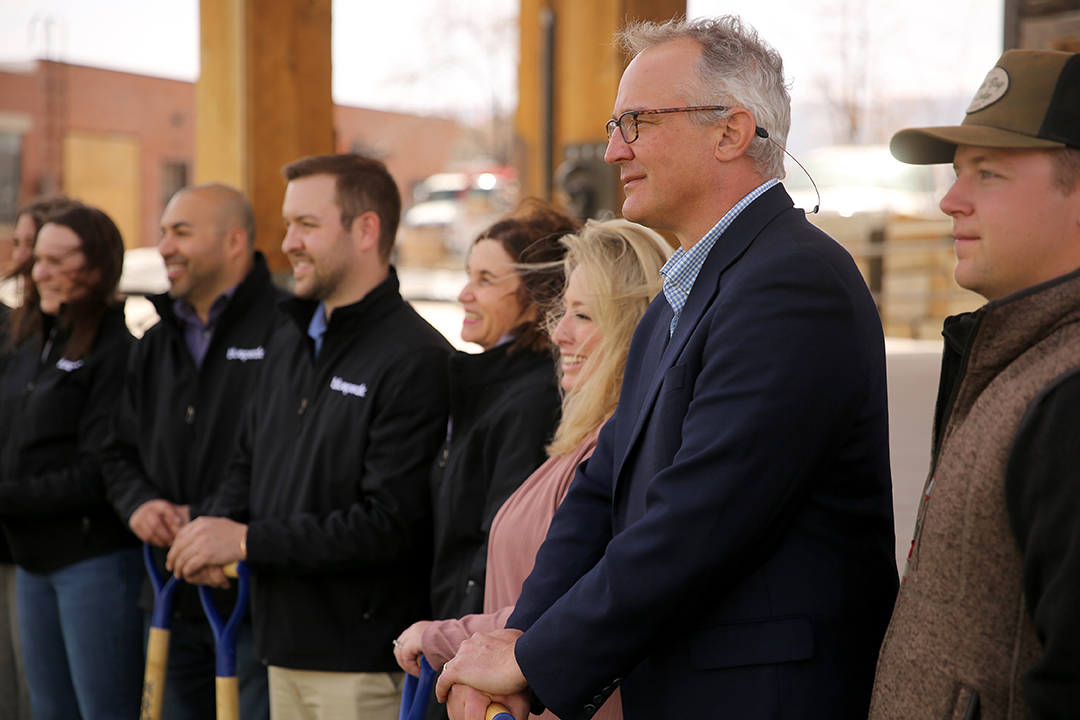 Bluepeak chief executive business officer Mike Harry, second from right, poses with company and Casper representatives during a ceremonial ground breaking at David Street Station on Tuesday. The company plans to wire every home and business with fiber-optic capability over the next three years. (Dan Cepeda, Oil City News)

CASPER, Wyo. — Bluepeak company employees and Casper Area Chamber of Commerce representatives held a ceremonial groundbreaking at David Street Station on Tuesday to mark the upcoming construction of a new fiber-optic internet and cable system for the Casper market.

“We plan on about 4,000 to 5,000 homes this year, and it’ll be a multi-year project,” Bluepeak chief business development officer Mike Harry said.

Construction will start downtown and expand to homes in the next couple of weeks, he said. The company hopes to have early customers online by August and ultimately have some 24,000 residents and businesses wired.

The company, which is based in Colorado as Clarity Telecom LLC operating as Bluepeak, focuses on building broadband systems in smaller markets. Similar systems have been built in South Dakota and are currently under construction in Cheyenne.

“We’re a pure fiber-to-the-home, so we’re a next-generation technology,” said Harry, adding that fiber allows the same upload and download speeds that can reach 5 gigs for residences and 10 gigs for businesses. Bluepeak is also a cable company and will offer tiered packages, he said.

“Casper will probably be a three-year build, just given the size of the market,” Harry said. The systems will be both underground and raised using existing infrastructure. He said the company is using its own capitol for the project and hasn’t received any state or city funding. The company is under an aggressive growth plan, with 20 new markets in play by the end of the year, he said.

According to an earlier press release, the company currently operates under the name Vast Broadband in South Dakota and parts of western Minnesota. Those markets will be rebranded under the name Bluepeak in 2022.

“Our company comes from rural roots, and we understand that companies pass over places like Wyoming,” said Bluepeak’s government affairs representative Casey Quinn. “We believe people in Wyoming deserve as much access as someone in Los Angeles or New York.”