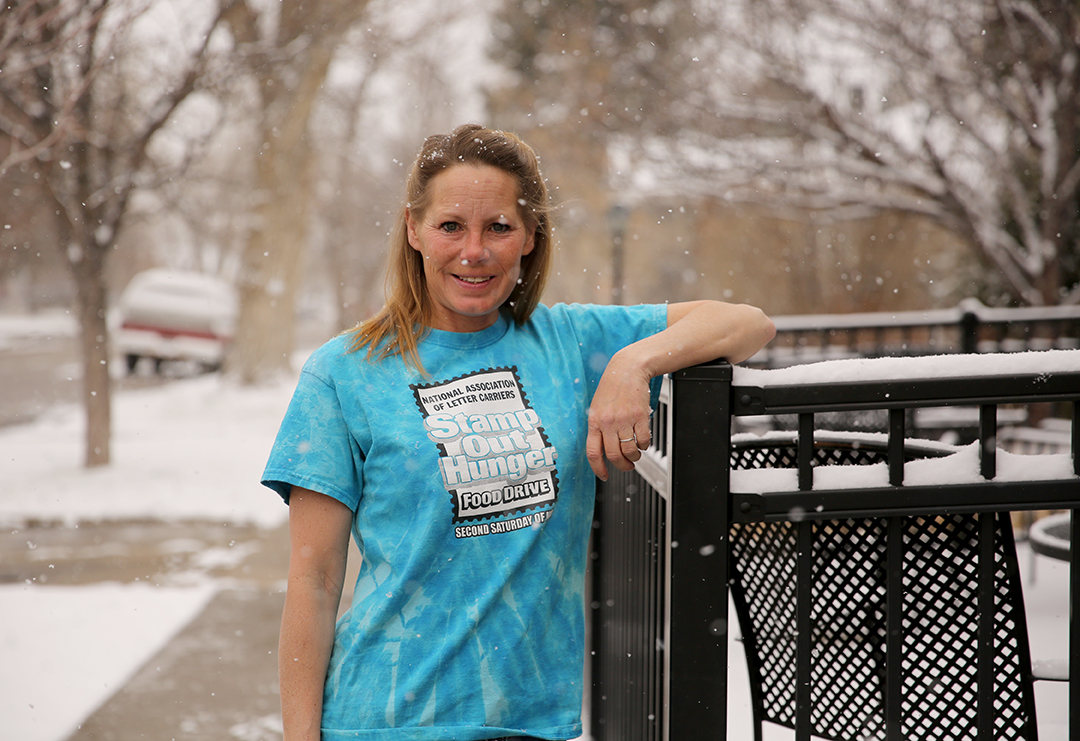 Letter carrier Dani Wolff poses recently in a central Casper neighborhood that once was on her route. Wolff is organizing the Casper carriers for the annual “Stamp Out Hunger” food drive organized nationally by the National Association of Letter Carriers (NALC) (Dan Cepeda, Oil City News)

CASPER, Wyo. — The COVID-19 pandemic not only caused food insecurity in Wyoming to rise, but it also temporarily halted a successful food collection drive.

“We didn’t know exactly how it spread, and we weren’t even sure if it was spreading through the mail,” said Casper letter carrier Dani Wolff, who just a couple of years earlier had taken over the Casper duties for the annual “Stamp Out Hunger” food drive, organized by the National Association of Letter Carriers.

The campaign was paused for two years out of an abundance of caution, but this year, organizers are relaunching the drive while marking the 30th year since its inception.

The program is perhaps more needed than ever, Wolff said.

“With what was going on with the pandemic, our pantry [stock] went down a lot because people didn’t have jobs and weren’t getting paid,” she said.

The “Stamp Out Hunger” program encourages residents to leave shelf-stable food goods at their mailboxes or curbside on the second Saturday in May, which this year falls on May 14. Letter carriers and volunteers will pick up the food and deliver it straight to the Food Bank of Wyoming’s warehouse in Evansville. From there, the food will be distributed to some 160 partner operations throughout the state, handed out in 25 mobile pantry sites and sent to other hunger relief programs.

Nutrient-packed and shelf-stable food — including canned vegetables, fruits, beans, peanut butter and meats — is preferable. Wolff also stresses that people should look at expiration dates, since anything that’s expired must be discarded.

Wolff said that even if residents forget about the drive on that Saturday, carriers will still continue to pick up food for a couple days following the event. Monetary donations to the food bank are also encouraged.

According to statistics provided by the Food Bank of Wyoming, one in six children and one in eight people in Wyoming are considered food insecure.

Food Bank of Wyoming development manager Jill Stillwagon said food donations are down 12% this year, which the organization has offset by purchasing food with its own funds.

Other economic trends are adding pressure to the operation of distributing food to food-insecure people across the state. Food Bank of Wyoming trucks drove more than 260,000 miles over the last fiscal year, Stillwagon said.

“Obviously our freight cost has increased,” she added. “I think we’re seeing that [cost] almost triple in our budget for freight and gas.”

Stillwagon and Wolff say all of the food and donations collected in Wyoming stay in the state.

Wolff has worked as a mail carrier for eight years, and partly because of that she feels a deep connection to the communities she serves.

“It’s important,” she said. “Because of the pandemic, a lot of people are still trying to get back on their feet.”

“When you see a community come together like they do for this, it’s just overwhelming.”