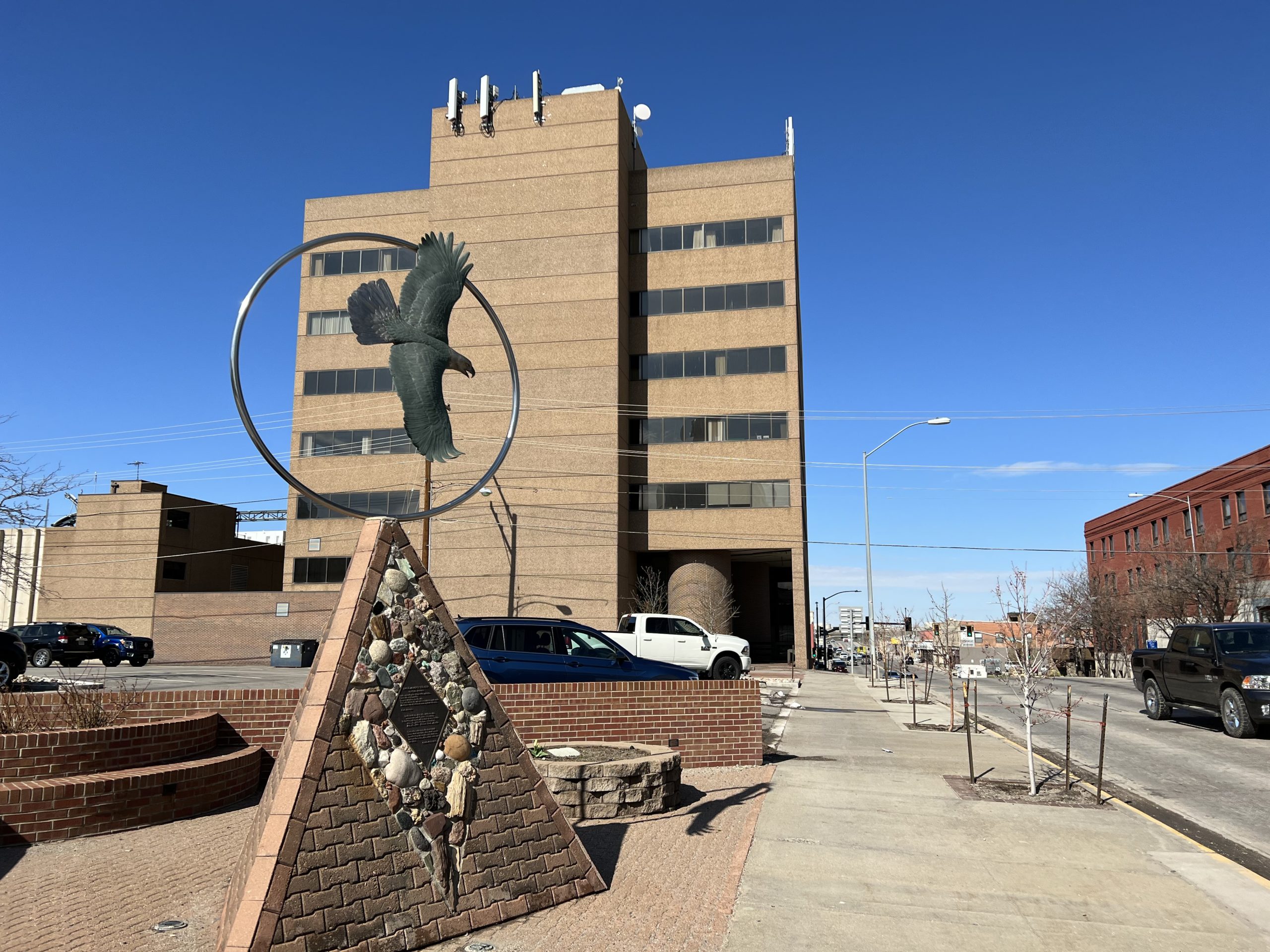 CASPER, Wyo. — Casper City Manager Carter Napier said Monday morning that he thinks the Casper Business Center is a good candidate for meeting the police department’s needs for a new headquarters without breaking the bank.

The building has the strategic advantage of being centrally located downtown near City Hall and other government facilities such as the Hall of Justice, where the police department is currently headquartered. Napier added that it has the space to eventually consolidate a variety of municipal operations under one roof, including dispatch and the municipal court.

The proposed purchase price is $8 million. Rather than relying on optional sales tax dollars or other local revenue sources, the city is proposing the use of federal American Rescue Plan Act dollars to buy the building. The city will need to invest more to rehabilitate the building, but Napier said the thought is that the overall expenses will be significantly less than a completely new build. He added that the city does not think federal guidelines for the ARPA money prohibit its use for the purchase of the building.

The city released results of a survey in spring 2020 that found about 61% of voters would support using “sixth cent” special purpose sales tax dollars for a new police headquarters that would cost about $42.5 million to design, build and equip. Napier said Monday that this estimate didn’t include the cost to purchase land. With inflation at a 40-year high (per the Associated Press), the city manager said costs to build new have likely grown closer to $50 million.

Forecasting how inflation will impact costs to rehabilitate the Casper Business Center is difficult, according to Napier. He said that while recent bids for City Hall upgrades came back about double what the city had expected, bids for two other projects, including a roofing project, subsequently came in significantly lower.

Nevertheless, inflationary pressures will likely impact costs to rehabilitate the Casper Business Center, but Napier said the city still thinks this route will be significantly less expensive than building a brand-new police headquarters. If the city council approves the purchase of the building, it will look to retain an architect to design improvements to the building. Specific estimates on what rehabilitation will cost won’t be available until that happens.

“It is a 40-year-old building [but] the bones in it are very, very good,” Napier said, adding that the city should be able to get at least 40 more years of use out of the Casper Business Center. “We certainly do have some things to do to it.”

Upgrades to the Casper Business Center would include work to meet the technological needs of the police department and dispatch as well as work to ensure it can properly meet the police department’s evidence holding needs. Napier said that HVAC appears to be less of an issue in the building, but work to ensure energy efficiency will likely be a big task when it comes to rehabilitation.

If the purchase happens, the city won’t be moving into the building immediately. Some of the existing tenants will be allowed to temporarily stay and continue utilizing a parking garage and uncovered parking lot adjacent to the building. Current tenant Mountain West Technologies has its telecommunications infrastructure heavily integrated into the building and if the city council approves the purchase of the building on Tuesday, it will also consider a resolution authorizing a lease agreement so that Mountain West can gradually decommission its operations and move to another location.

The city anticipates that lease agreements with existing tenants should cover the roughly $200,000 in operating costs at the building for the first year under city ownership. The city estimates it will be 24–36 months before the building is primarily occupied by city staff, according to a memo from Police Chief Keith McPheeters.

While exact timelines remain uncertain, Napier noted Monday that the new building will eventually allow the city to stop paying leases at other facilities such as the Hall of Justice or the building housing dispatch.

Some in the commercial real estate field said last week that the city’s interest in the Casper Business Center might offset some impacts stemming from state agencies vacating office space across town to move into the new Thyra Thomson Office Building. Napier said Tuesday that the city’s purchase might have some benefit for the downtown area from an economic development perspective, but that this was not the city’s focus when contemplating the buy.

“I would say that the opportunity to keep a large commercial space vibrant is probably more of a side benefit if you will,” he said. “[That was] certainly not our main focus.”

Rather, Napier said city staff and councilmembers serving on a committee working on the new police headquarters question were focused on finding a location that could meet the department’s strategic needs in a manner that would be financially responsible to taxpayers.

Napier said that locations outside of the downtown area were considered. One option the city looked at was the possibility of building a brand-new headquarters on city-owned land near the Events Center. However, from both a strategic standpoint as well as a cost standpoint, Napier said the centrally located Casper Business Center appears to be the best option and that he thinks councilmembers who served on the police headquarters committee are prepared to help make that case.