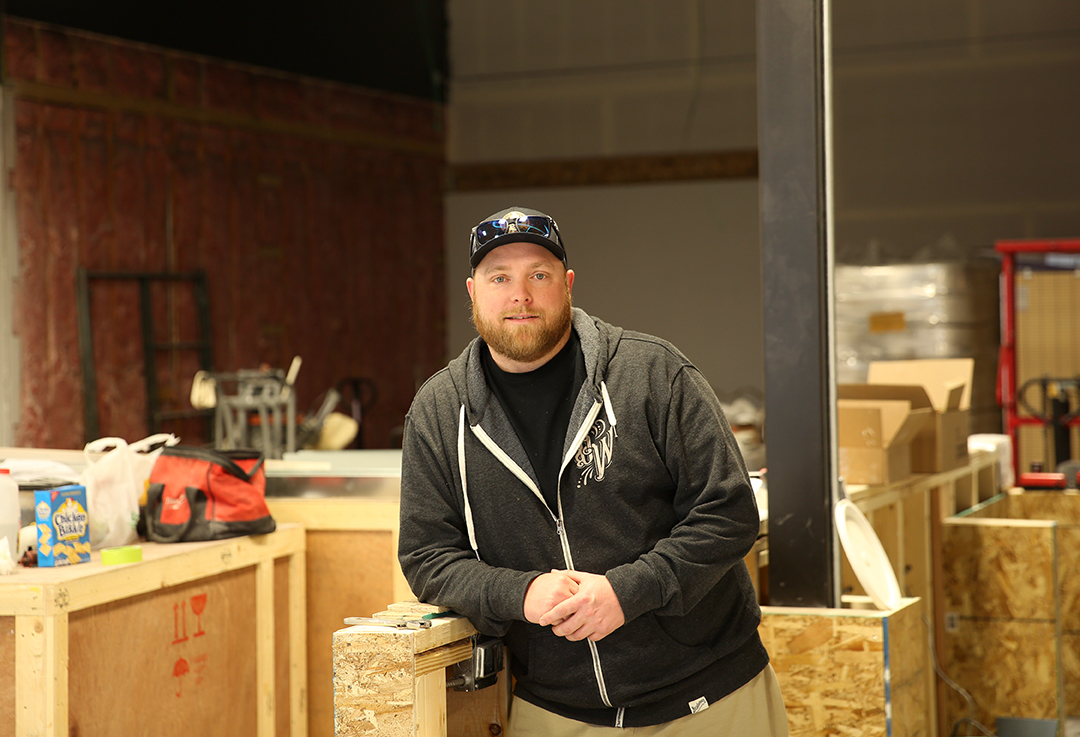 CASPER, Wyo. — Holden Kai started visiting breweries years ago with his biological dad, who happened to be a fan of craft beer. Holden wasn’t quite on board, however.

“I was the type of guy that would go in and say, ‘What’s the closest thing you have to a Bud Light?'” he recalled. “I hadn’t really developed the palate for it.”

A small home brew kit he received as a Christmas gift started to change all that. Soon he was diving deep into craft beer recipes, eventually landing an internship at a small startup brewery called Something Brewery in downtown Brighton, Colorado. There, he quickly learned hands-on what it takes to make good beer and run a brewery.

With financial backing from his stepfather, Kai is opening Bull Horn Brewery on Beverly Street and East Yellowstone Highway, in the same building as O’Reilly Auto Parts.

Kai credits Something Brewing for bringing life to Brighton’s sleepy downtown, and hopes to give the industrial area in Casper that same kind of energy. The brewery will be located just off the Casper Rail Trail, and blocks away from two other respected Casper craft breweries, Mountain Hops and Skull Tree Brewing.

Craft breweries in Casper have grown from zero in 2017 to six currently, with at least two more on the way including Bull Horn. That’s not a concern for Kai; in fact, he sees it as a positive.

“I’ve never seen an unsuccessful brewery surrounded by other breweries,” he said. “People like variety; they go to one and then go to the next. That’s cool to be a part of that starting up; it’s pretty exciting.”

Kai is building Bull Horn Brewing from scratch inside a building sandwiched between O’Reilly Auto Parts and car restoration experts Z’s Classics, so he plans on bringing plenty of car and sports culture into the vibe. A state-of-the-art golf simulator will anchor one side of the building, while multiple large TVs on the walls will play games and sports. He’ll also offer plenty of sports drinks and other non-alcoholic refreshments for cyclists coming off the trail who’d prefer not to drink beer.

Kai said he’s a fan of traditional beer styles, but also enjoys experimenting with unique flavor combos. “That’s the great thing about craft beer. It’s a craft; it’s like an art, just like the culinary arts,” he said.

He has a new double-batch, two-barrel brewing system and hopes to expand at some point later. He’ll have room for 10 taps, but will likely start off with five, he said.

“We want to be family friendly; we have two kids as well,” he said. “If somebody wants to bring their child in, we really want to create a laid-back, chill environment for them.”

Kai moved from Florida to Casper 15 years ago, and he appreciates being able to become part of the community.

“It’s not easy to move as an adult to a different state and have people accept you when you didn’t grow up here and go to school here,” he said. “Everybody was really nice and we fit in just fine.” With that in mind, he wants to give back to the community by donating 10% of proceeds to local causes on specific days of the week.

Barring any supply chain issues, Kai hopes to be serving customers by June 20.

More information on Big Horn Brewing can be found here at their Facebook page.