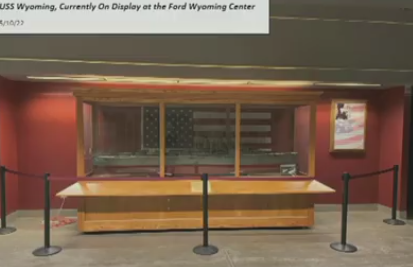 The ship builders model of the USS Wyoming at the Ford Wyoming Center. (Screenshot via City of Casper, YouTube)

CASPER, Wyo. — On Tuesday, the Casper City Council indicated agreement with a proposal to move the ship builders model of the USS Wyoming to the National Museum of Military Vehicles, located at 6419 U.S. Highway 26 outside of Dubois.

The 11-foot model currently at the Ford Wyoming Center is the original ship builders model of the USS Wyoming and remains Navy property, according to Casper Parks Director Zulima Lopez. If the model is transferred to the museum, it will remain Navy property.

The museum wouldn’t be able to sell the model and a loan agreement would be arranged between the Navy and the museum for its display, Lopez said in response to a question from councilmember Steve Cathey. Cathey asked about ownership due to concern the museum might be able to turn around and sell the model.

The effort to bring the model ship to Wyoming was spearheaded by Robert Stanley Lowe, a member of the Wyoming Council of the Navy League of the United States. Lowe died in 2015, so the city was unable to ask him if he would be okay with it moving to the museum. Lowe had asked previous City Manager John Patterson for assurances it would stay at the Events Center, and Patterson had given such assurances.

Councilmember Bruce Knell said that while the museum might be a good home for the model, he was concerned about whether the city was doing something that would go against Lowe’s wishes. He said he thought the city should reach out to Lowe’s family.

City Manager Carter Napier said that staff tried to reach out to people and organizations involved in securing the loan of the ship from the Navy to bring it to Casper. Some of the organizations are no longer in existence. The American Legion Post 2 and the Veterans of Foreign Wars Post 9439, on the other hand, remain active and have expressed support for the move of the model ship, according to a memo from city staff.

“In fact, members of the American Legion Post 2 provided a letter of support stating a belief that Mr. Lowe would have been proud to see the model on display at the NMMV,” the memo adds. “We respect and want to honor Mr. Lowe’s wishes to share the model with Wyoming residents from around the state. We believe a relocation to the National Museum of Military Vehicles is the best tribute that can be offered to him and with respect to the Navy and the USS
Wyoming.”

Cathey said that he received a phone call from someone who knew Lowe and after informing this person the model would remain Navy property, that individual said he thinks Lowe would have agreed moving it to the museum would be a good idea.

Knell said that he has been to the Events Center “hundreds of times and I’ve never seen [the model],” so he agreed it will be more frequently seen at the museum. His hesitation was out of respect for Lowe and his family.

Lopez said she had also had a conversation with a representative of the Wyoming Military Department’s Veterans Commission, who agreed the move was a good idea.

More people are likely to see the model at the museum and the museum is better equipped to preserve it, councilmember Amber Pollock said.

“This is a world-class museum that is getting better and better as more things are being added to it,” Pollock said, indicating her agreement with the proposal.

Councilmember Kyle Gamroth said he appreciates that the museum is planning to dedicate a room specifically to the USS Wyoming to house the model, as it will get more views and interest there than at the Ford Wyoming Center.

Pollock asked about the logistics of the move itself.

The city has contacted several movers and has located one who has a plan to move the whole model in its case and can transport it with all the necessary insurance requirements and de-freight it at the museum, according to Lopez. The city estimates the cost of the move will be $3,650. The city is hoping the museum will share in the cost. Casper funds used would come out of the Ford Wyoming Center Fund.

City staff’s full memo and with letters it references about the USS Wyoming model are available in the council’s work packet.