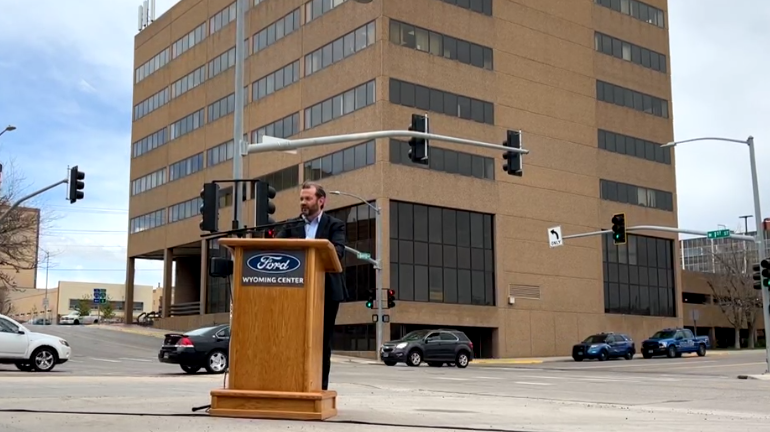 CASPER, Wyo. — The City of Casper used $8 million in American Rescue Plan Act funds to buy the downtown Casper Business Center, but more money will be needed to renovate the building to house police headquarters, municipal court and other city functions.

What it will cost to remodel the building remains unknown, but the city plans to begin with the remaining federal dollars it has received, City Manager Carter Napier said at a press conference Wednesday. The building purchase ate up most of the $9 million in ARPA funds the city received; however, it still has about $11.2 million in federal CARES Act funds.

Napier said the CARES dollars will likely cover the bulk of the renovation costs. If more is needed, the city will likely turn to its Opportunity Fund, which Napier said has about $5 million. The city manager said he thinks it is unlikely the city will need to dip into reserve funds that are supposed to remain dedicated to other purposes. The overall investment in the Casper Business Center is expected to be significantly less than the roughly $50 million cost to build a brand-new police headquarters, Napier has previously said.

The renovation of the building is expected to take two to three years, Mayor Ray Pacheco said Wednesday. The city plans to select an architect through a competitive bidding process. That architect will then help design renovations for the building, a process Pacheco said is expected to take 6–12 months. Construction will begin once designs are complete.

Some city functions are expected to move into the building immediately, but existing tenants are allowed to stay under lease agreements they had with the building’s previous owner, Wyoming Financial Properties.

The committee of city staff and city council members that researched a solution to the police department’s need for new headquarters looked at 15 existing buildings across town as well as various vacant land locations, according to Napier. Vice Mayor Steve Freel said he thinks the Casper Business Center is the right choice not only because it is less expensive than building new, but also because of its central location.

Police Chief Keith McPheeters said the department will benefit from the new space because it will be able to consolidate operations that are spread around town into a central location, allowing the city to avoid paying rent on leased space.

The building will also provide more space for police department employee office space, technology needs, and covered parking for police vehicles. An uncovered parking lot that is part of the purchase will become space for visitor parking, and McPheeters added that the building itself will be better able to accommodate meeting space between the department and the public.

“When it is done, this building will be an efficient public safety facility,” McPheeters said.

The driving factors in the city’s interest in the Casper Business Center were its central location and its potential to become the new home of police headquarters, dispatch, municipal court and other city services at a more affordable cost than constructing a brand-new building, Napier has said.

Details regarding why the police department sees a need for a new headquarters are explored in this article about inadequacies McPheeters pointed to during a tour at the Hall of Justice in February.

The city is aware the Casper Business Center, constructed in 1981, has some asbestos, but does not think abatement costs will be exorbitant. While more money will be needed to adapt the building to the city’s needs,

The City Council’s decision to authorize the purchase of the Casper Business Center came about two weeks after the opening of the new Thyra Thomson State Office Building in the Old Yellowstone District. The opening of that state building means a variety of state agencies are moving out of other commercial space around Casper, such as the Energy One building.